"Who are you anyway?"
- Spectran officer-
"Galaxy security!"
-Mark as only Mark can deliver thanks to Casey Kasem- 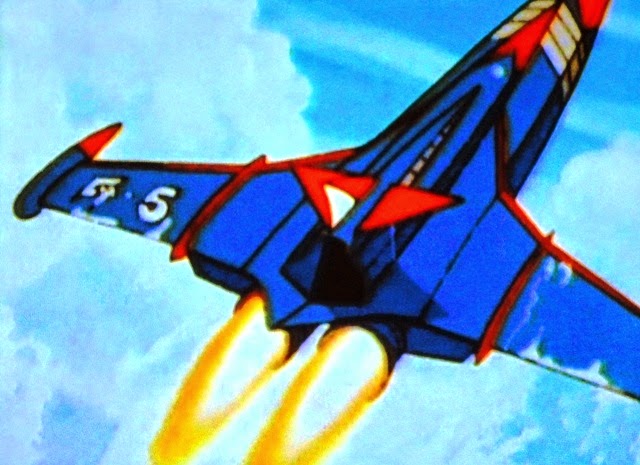 Say what you will about the simple stories that were crafted back in the 1970s for translation from Science Ninja Team Gatchaman (1972-1974) into America's Battle Of The Planets (1978), because at the very least Sandy Frank assembled some of the finest, coherent sci-fi adventures of the decade for kids, simple as they may be.

We return now to Sandy Frank's Battle Of The Planets, Episode 6, Big Robot Gold Grab. We also return to the ever so sweet melodies of Hoyt Curtin's accompanying score and truly one of the most glorious and memorable theme songs ever created for an American adaptation of Japanese anime. BATTLE-OF-THE-PLANETS. PRINCESS. TINY. KEYOP. MARK. JASON. 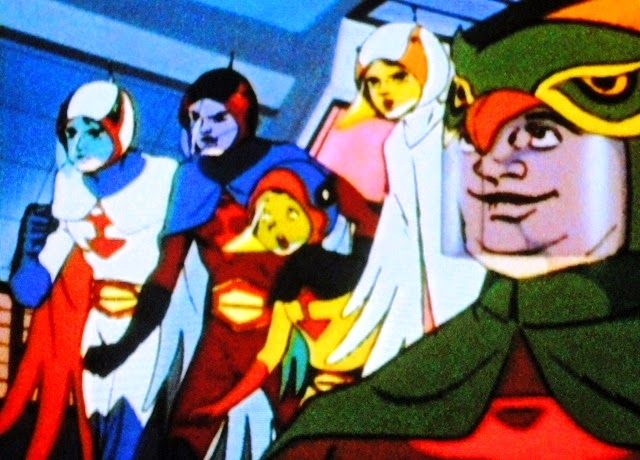 In more recent history I must tell you how overjoyed I was when Rhino licensed the series for DVD release in 2001. My joy quickly turned to heartbreak when it became apparent Rhino would not do the series justice. Initially the company released two episodes per DVD volume. This resulted in just six volumes before Rhino decided to haphazardly change tactics. The company threw together an Ultimate DVD Boxed Set that included twelve more episodes and a Jason figure. (By the way, if it's not the whole series it's really not Ultimate!) The final volley before giving up on the eighty-five (85) episode series was another two DVD 25th Anniversary release with the next fourteen episodes. This resulted in a total of thirty-eight episodes available in the United States officially. Perhaps as a result of disappointing sales the effort to release Battle Of The Planets in its entirety, if that was ever part of the plan at all, was shelved and a Battle Of The Planets rebirth was left to languish in obscurity even with a new comic on racks thanks to Alex Ross. Only a rare few of us probably retain those original Rhino releases. 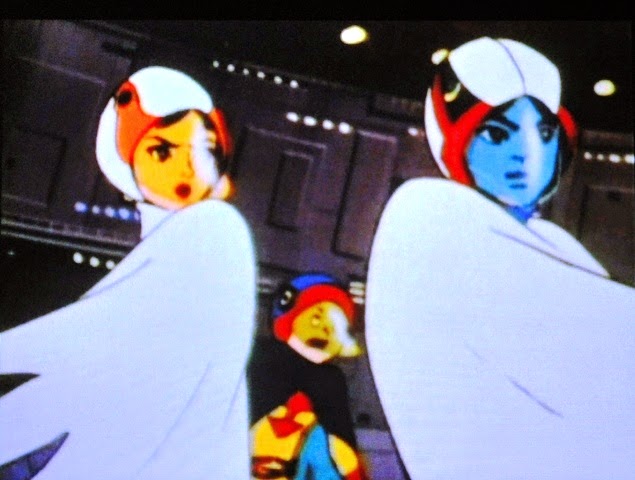 Sure, Science Ninja Team Gatchaman (105 episodes) thankfully saw a release here in America in its entirety by Section 23 Sentai Filmworks. And that original Tatsunoko series is a pure gem. They don't come any better than a classic like that one. But for many of us stateside who adored the expert voice casting of the late, great Casey Kasem, Janet Waldo, Alan Dinehart, Key Luke, Alan Young and Ronnie Schell, Battle Of The Planets was an adaptation worthy of its own praises and its own memorialization. For many fans Battle Of The Planets has yet to see the proper respect and treatment given. Many would have loved to see a proper DVD release of the eighty-five (85) episode Battled Of The Planets so that at least the series would have been available and recorded on DVD for posterity. Instead it was left to languish in the dustbin of anime classics history. Even the eighty-five (85) episode Robotech (1985) and the three Star Blazers (1979) series are at least available on DVD. 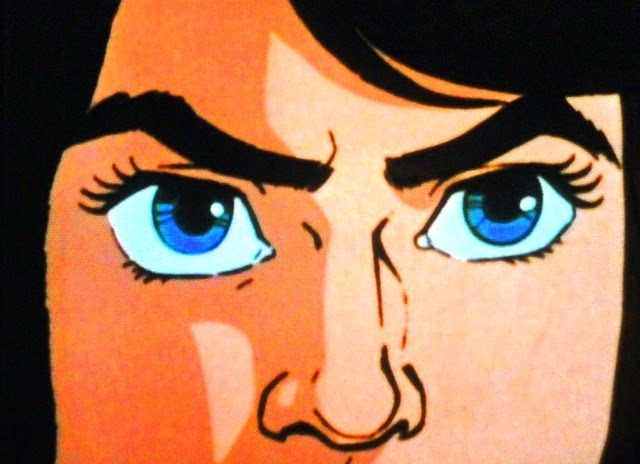 Thus, I have since, in recent days, turned to purchasing the complete Battle Of The Planets series from the United Kingdom and made a small investment in a DVD region free player so that I might finally be able to watch each and every episode properly and record them here for the record books. I'm looking forward to periodically doing it. I will turn to the Region Free DVD player when we reach the end of the Rhino line. Let's hope it works properly. They can be notoriously unreliable.

For now, let's turn our attention to Big Robot Gold Grab - a title that surely leaves nothing for the imagination regarding the enemy's vile intentions. 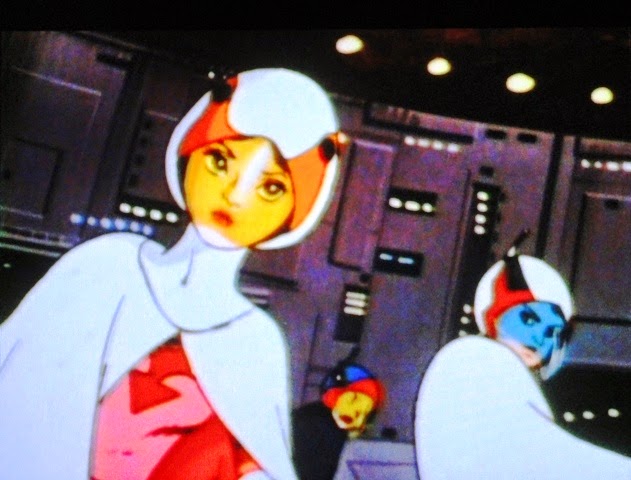 The evil Spectra robs a bank, not on Earth, but rather the intergalactic federation's gold reserves. Battle Of The Planets takes the fight away from Earth unlike Science Ninja Team Gatchaman and places those reserves in outer space.

This is a job for G-Force! The team is assembled and picked up in their respective vehicles - G1, G2, G3 and G4.

The team pulls the old bait and switch trick. Dressed as civilians and masquerading as members of a hang glider club they search the many islands (over 50) of this tropical Paya archipelago. Soon Mark, Princess and Keyop are captured by Spectran goons. But this is all going according to plan. 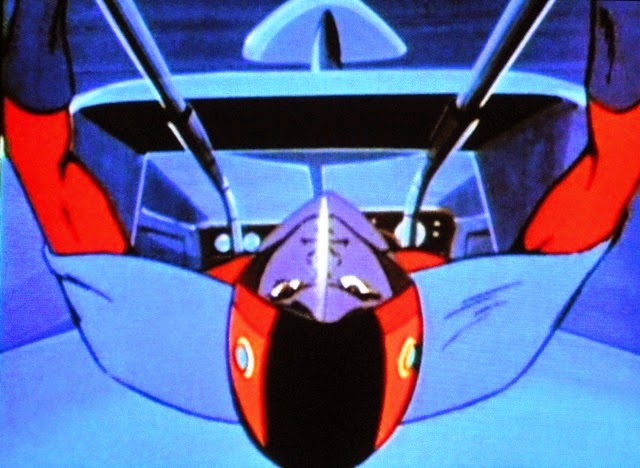 Jason would prefer to wipe out the Spectran outpost and he gets mildly combative with Chief Anderson, who insists the gold must be saved. Jason and Tiny prepare, in bird uniform, to slip into the enemy base and steal back the gold while the others distract the enemy.

Big Robot Gold Grab once again proves Spectra can set up a high tech outpost better than anyone complete with camera and missile launchers. There is no limit to the funding and resources these baddies have to assemble weapons of mass destruction. How do they do it!?

Jason is on the move on foot, but the Phoenix is spotted by camera. A missile is launched and it is believed by the members of G-Force that Tiny and the Phoenix have been destroyed. Fortunately, Tiny is smarter than your average hoot owl. 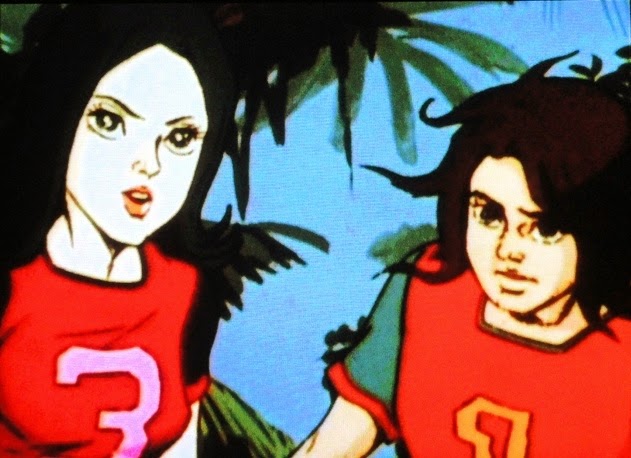 As Mark, Princess and Keyop are brought to an isolation vault the team transmutes and takes on the Spectran robots. Yes, the can of whoop is well-opened.

Jason makes his way to the gold to retrieve it before the Luminous One and his first officer Zoltar can return it to Spectra.

"Shall we give 'em a taste of the wind?" As the team prepares to exit, Mark, Princess and Keyop deliver the whirlwind pyramid wiping out robots and goons aplenty. 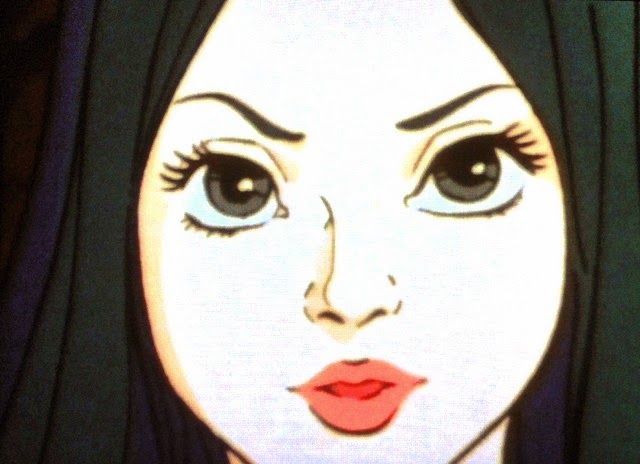 Reunited, Jason overrides Mark's command decision to fire a missile at the escaping submarine that has housed all of the fake gold in the form of spray-painted yellow cement bars. Jason simply cannot control himself and he misses just as Mark warned.

Nevertheless, Zoltar orders a robot aboard his officer's sub to push self-destruct. The evil Spectra once again proves all are expendable under the cold, heartless leadership of Zoltar and the Luminous One. 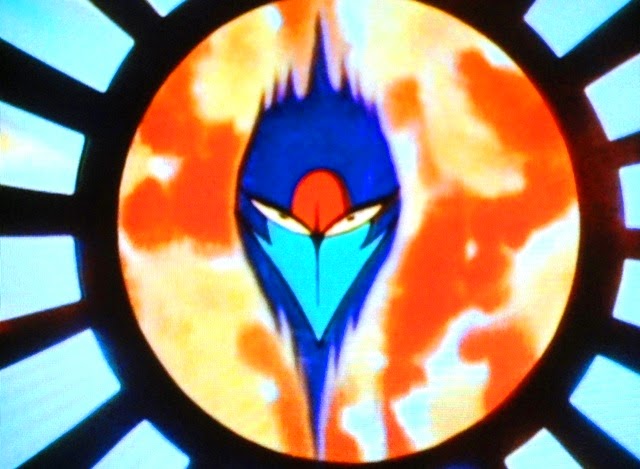 Dialogue highlights from the episode include Jason talking out loud upon finding the gold bars, "Yeah, alright you pretty babies, Daddy's gonna' take you home. I've been to Zoltar's bank and made a big withdrawl." Jason grabs the G-2 and exits with the gold. The physics of moving the gold with the G-2 to the Phoenix are never quite covered, neither on how he actually got the cement there.

Tiny, too, has a wonderful character moment recalling his days as a bit of a mover and a shaker. "The last time I was in the South Seas there was this native girl. She did a hula underneath the palms in the moonlight. Just for me. Wow did she come on! Whoa hey did she come one!" Mark replies, "Okay tiny, close your scrapbook."

And with that, for now, this blogger closes his electronic scrapbook of anime memories.

Up Next: Ace From Outer Space. 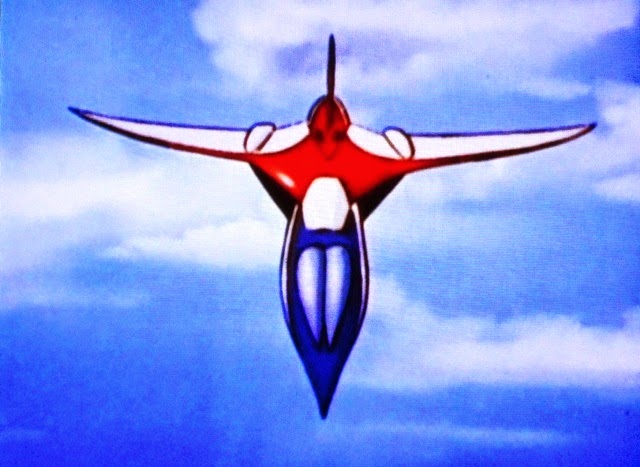 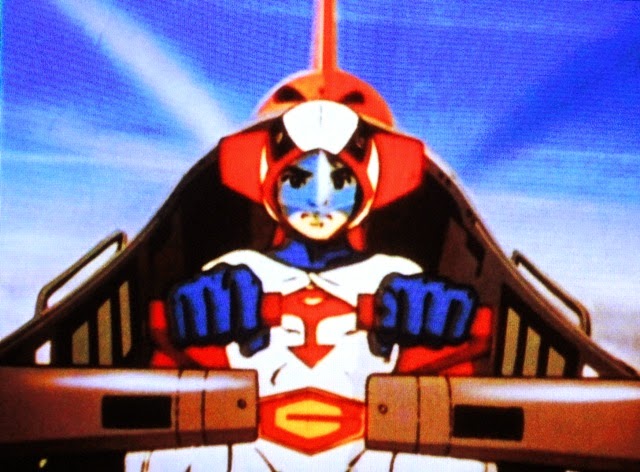 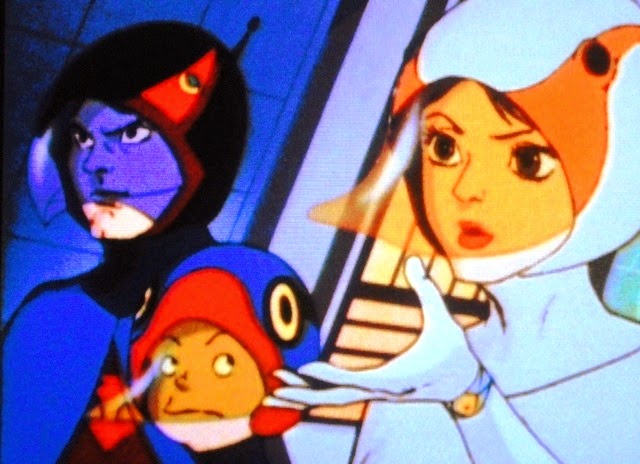 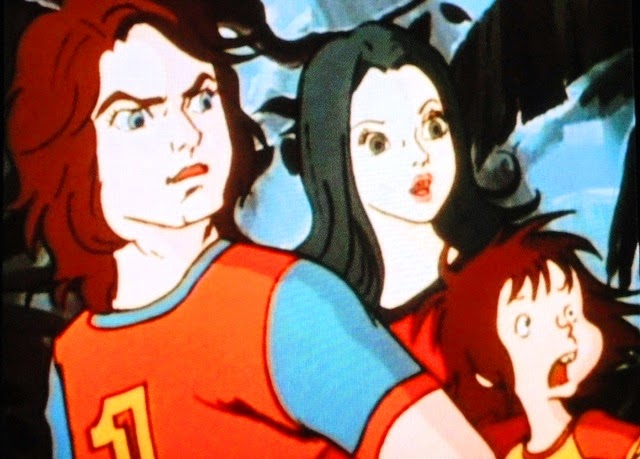 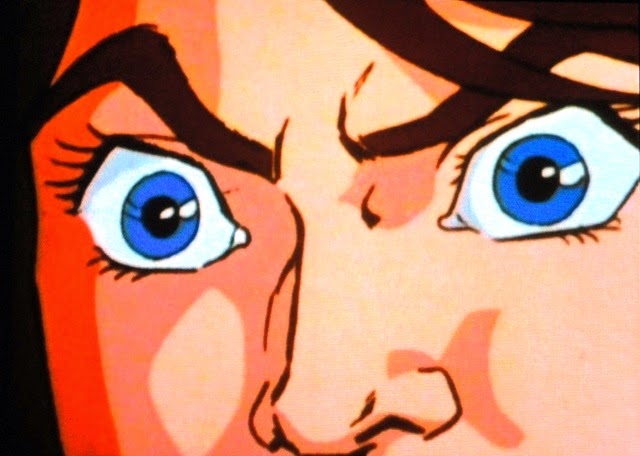 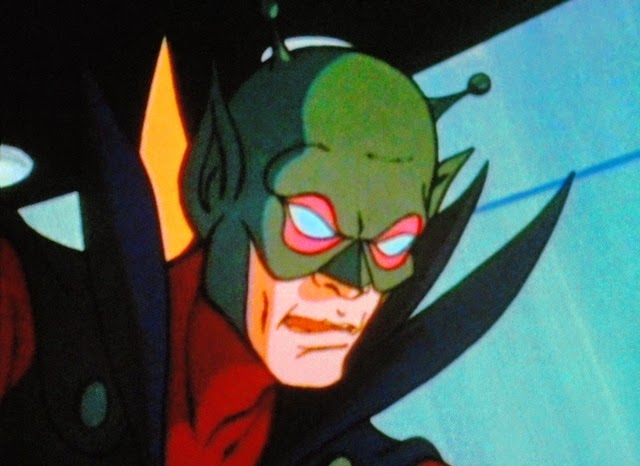 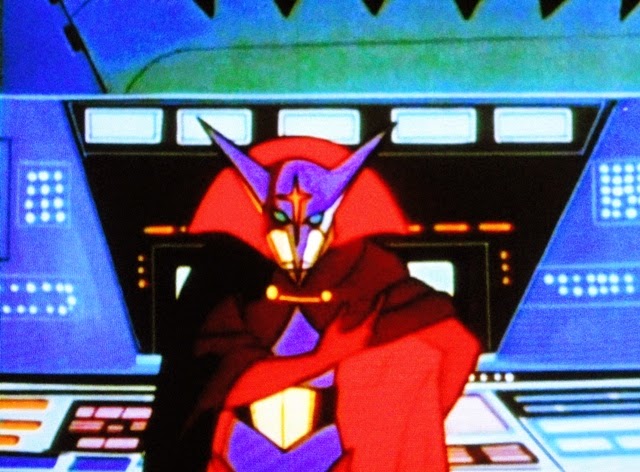 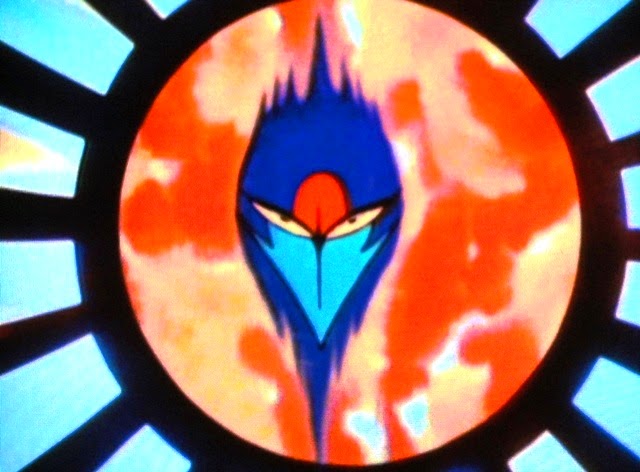 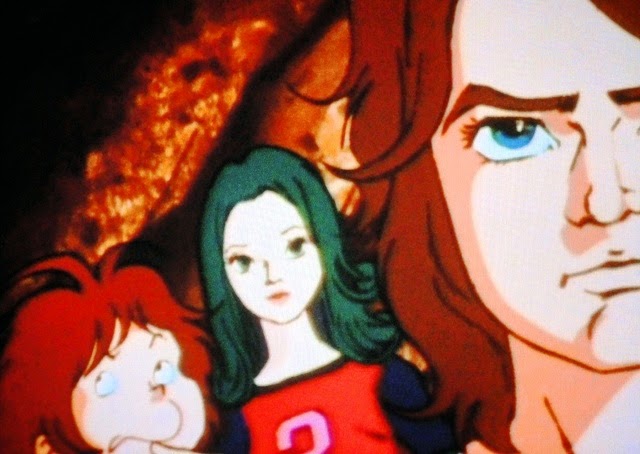 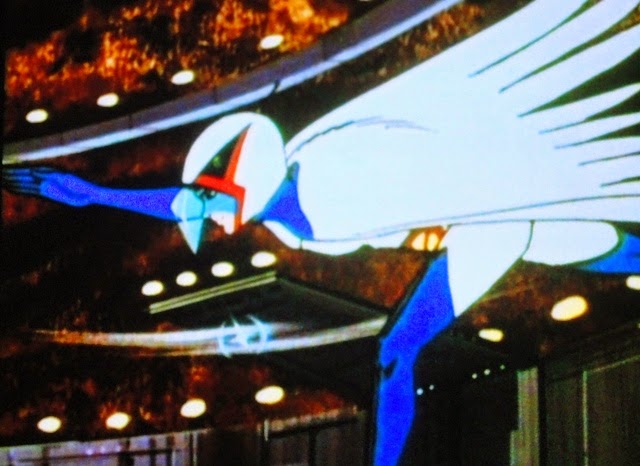 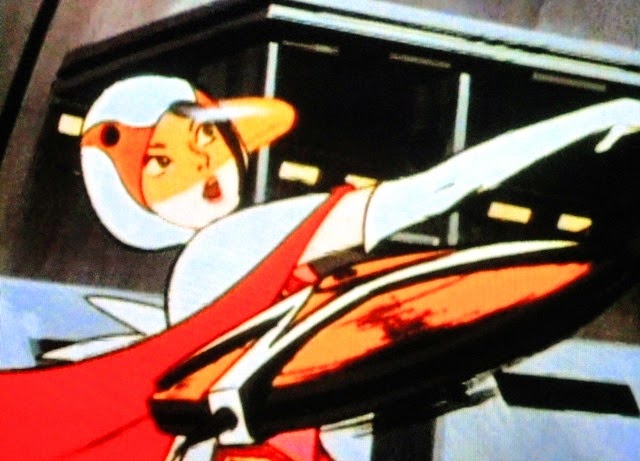 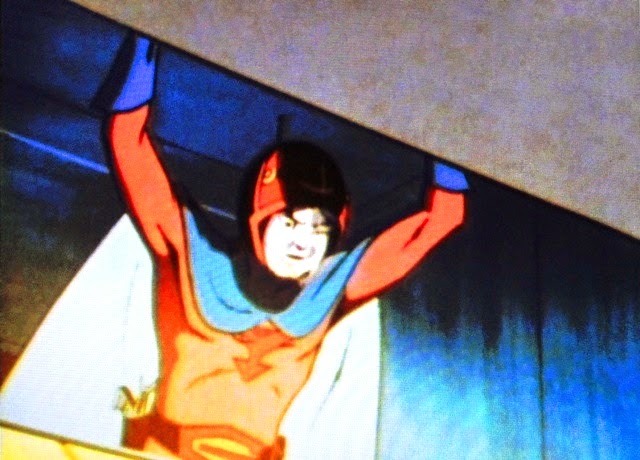 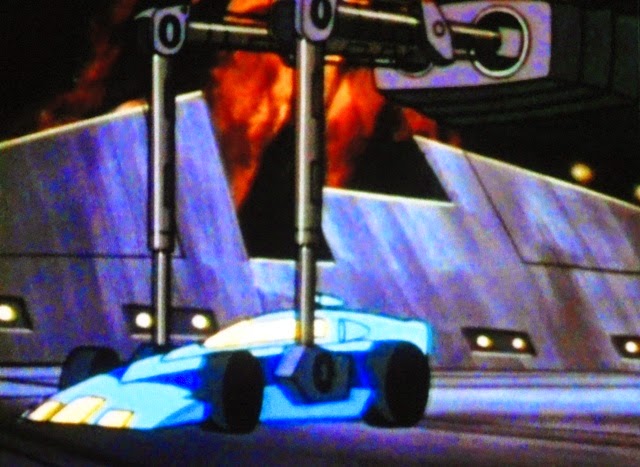 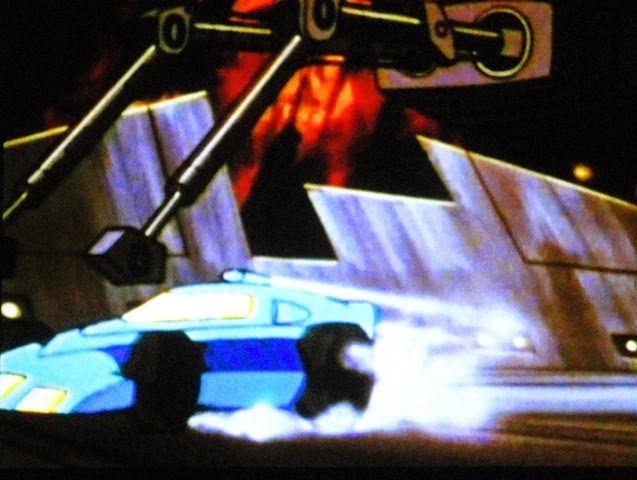 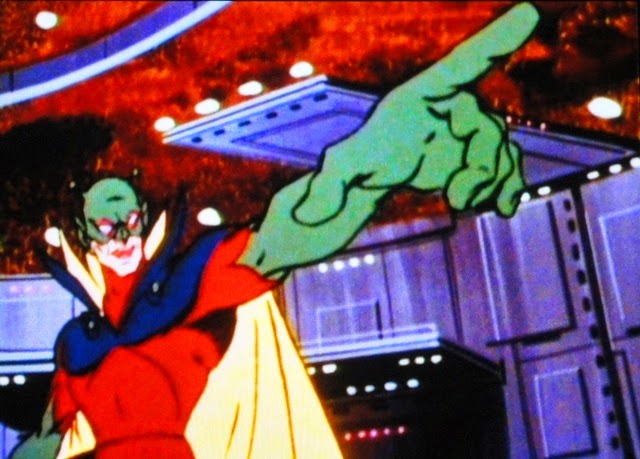 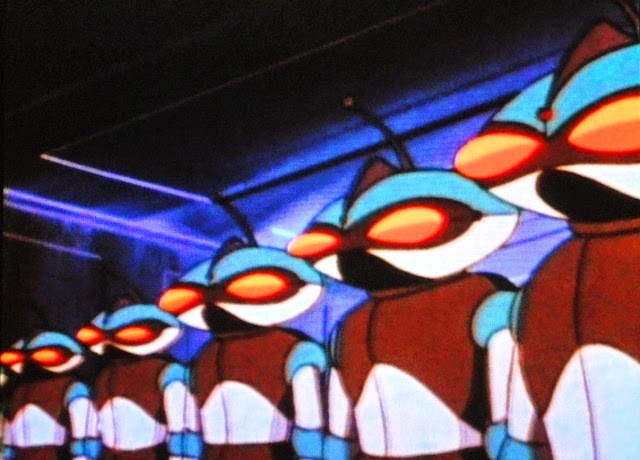 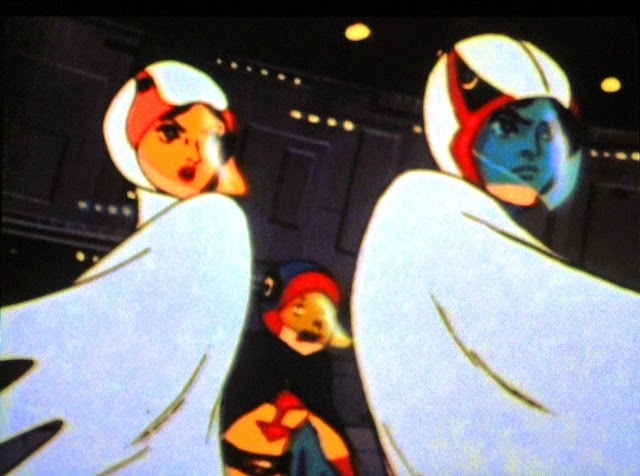 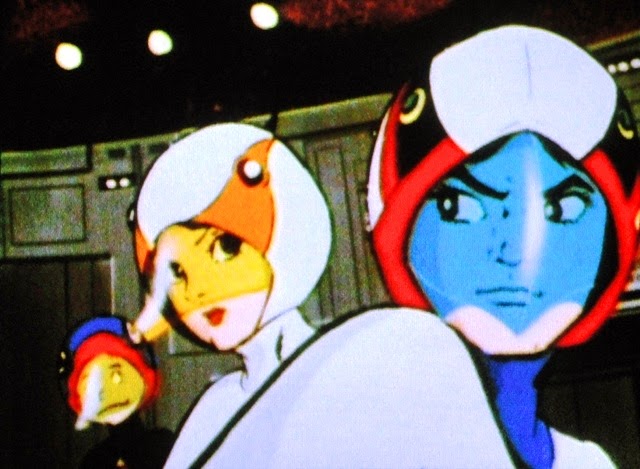 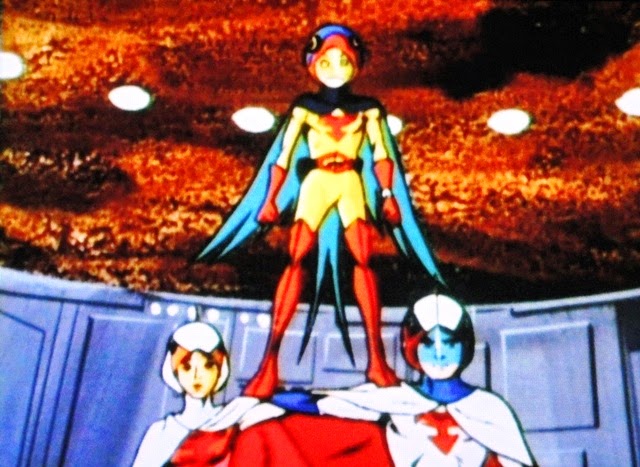 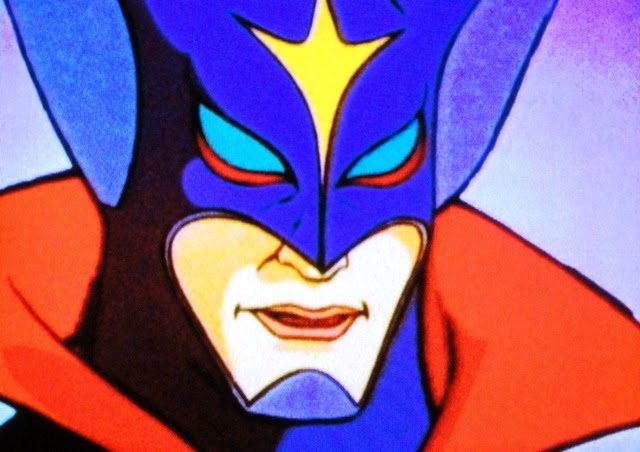 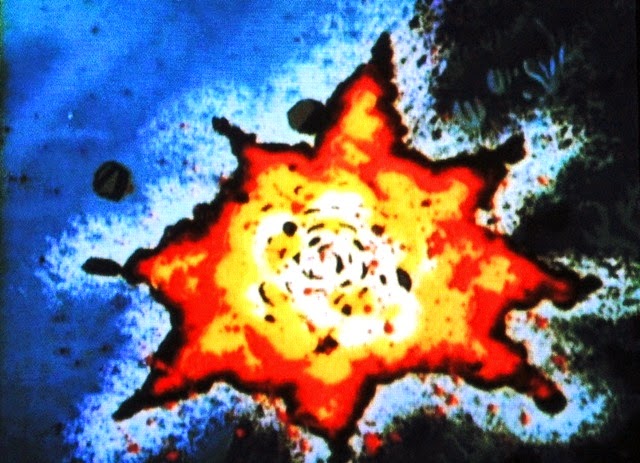