It's me, Rembrandt.
Obviously that's meant to be funny. I can't tell you how mercilessly The One To Be Pitied ridicules my efforts to paint. It's brutal I tell you. That's okay I persist.

I found this shirt that best explains my love for all things anime. It was succinct and rather to the point, but it's true that many folks I know wouldn't get it at all and I wouldn't bother trying to explain my affection for it either. They would look at me like King Ghidorah, you know, with three heads! 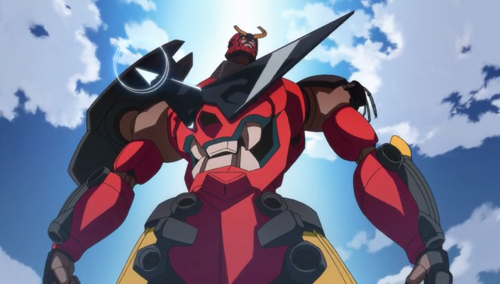 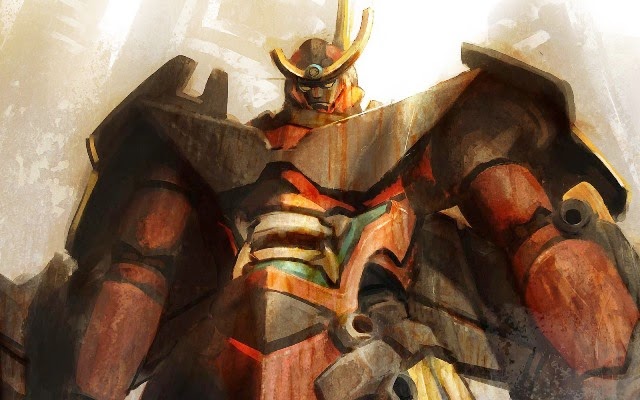 For those who have visited Musings Of A Sci-Fi Fanatic you know my love outside of writing has been to paint once a year. Hey, I'm not prolific. Anyway, the whole painting thing, unlike writing, is essentially like channeling my inner child. I drew so many pictures of superheroes, robots and spaceships as a child I may have destroyed a small forest in Europe. I generated pictures using boxes of Crayola crayons like a printing press for a newspaper business at their peak before the Internet came along. In fact, I recall periods when I would create pictures of monsters and various superheroes were drawn, essentially in stick form with their respective colors and powers, battling a given creature. Human Torch, Silver Surfer, The Thing, Mr. Fantastic and Spider-Man were frequent flyers on reams of construction paper. But anime vehicles and other amazing mech designs were entirely fair game. Gosh, I wish I had just a handful of those pictures to smile upon today. 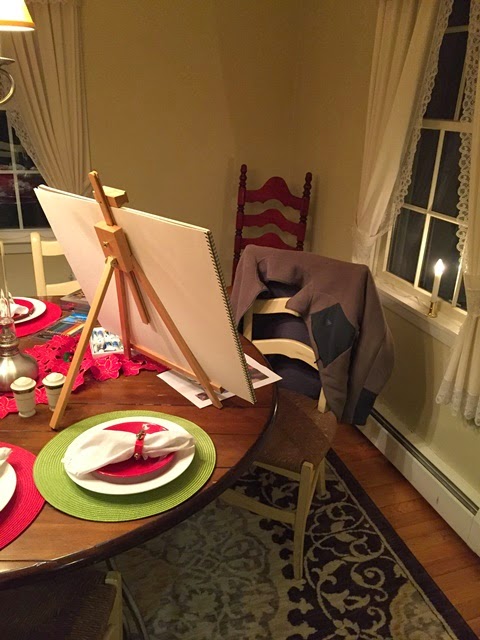 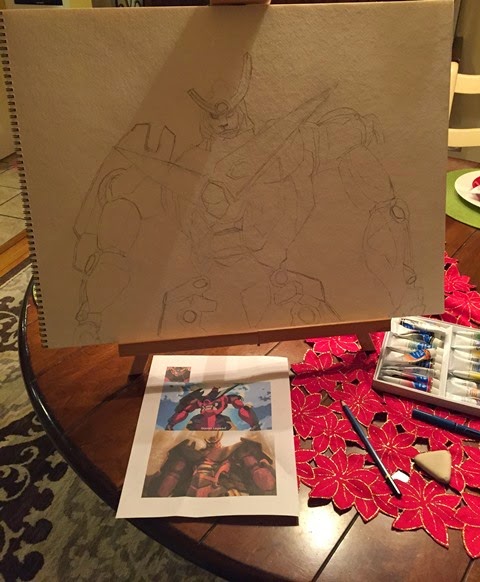 And truth be told, one of the reasons I love drawing anime so much is my envy of artists in Japan and here at home in the USA in comics that I respected and loved so much growing up. I'm definitely a frustrated artist who consciously wishes he had the talent of John Byrne (Fantastic Four, X-Men), Yukito Kushiro (Battle Angel Alita), Jack Kirby, Yoshiyuki Sadamoto (Neon Genesis Evangelion), Bill Sienkiewicz (Moon Knight), Tsutomu Nihei (Knights Of Sidonia), George Perez (The Avengers) and others. Oh to dream of what might have been.

So here I am, much older, and still desiring to draw, paint and generally create pictures however unprofessional. And I confess they are essentially for my own affections. I show people the paintings and most outsiders actually kind of like their energy, especially every day folk with no context for anime or where they are from. They seem to love them the most because they are so wild compared to reality. Or I should correctly say they at least pretend to love them. 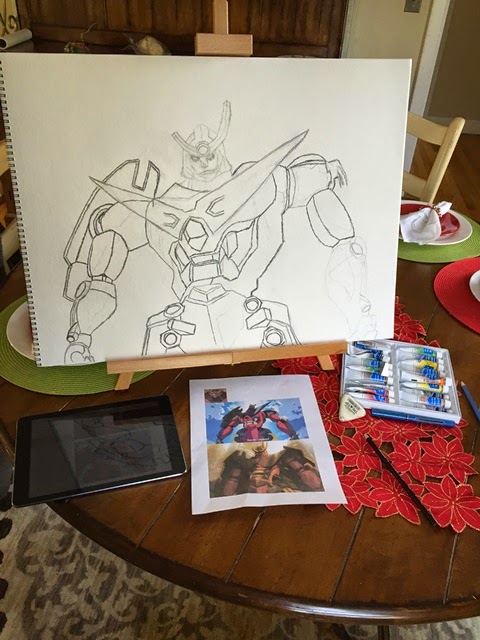 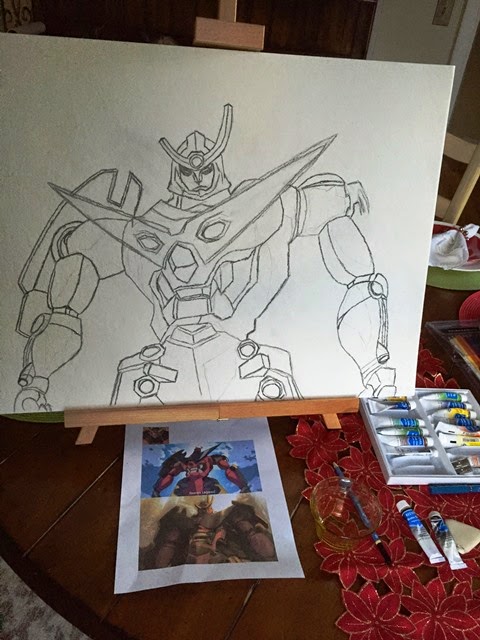 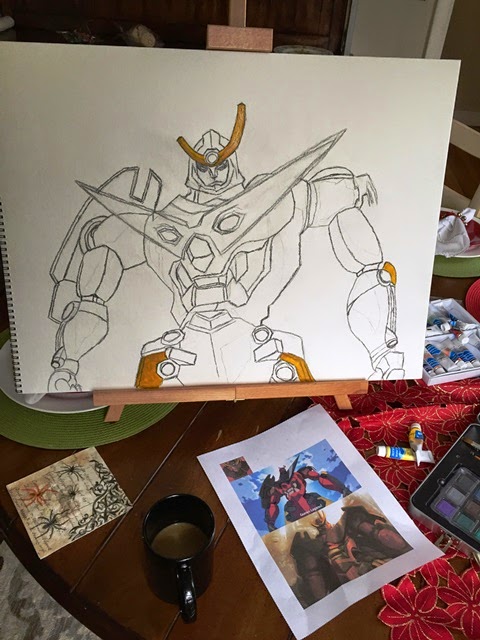 Friends will often say "Okay cool, but where is it going in your house?" I tell them, "The basement." "The basement!?" they decry. I say, "Yeah, I haven't quite won the battle to hang them on my walls at home. Ha." They usually crack up, but rest assured people, I may be losing the battles but I will win the war and I see the end of the war coming. Besides, if I paint enough of these puppies there will be no room left in the basement and the family will have to relent. I do have a plan and I will execute.

Nevertheless, I press on undeterred. The latest watercolor effort centered on world famous Gunmen and anime Gurren Lagann. And by the way there is no great formula for how I arrive at my selections. Essentially it's whatever I'm kind of interested in putting together at the time I plan to sit down. I think it over for a week or two but that's about it. In December I was oscillating between the Argo from Star Blazers and Gurren Lagann. Well, the Argo lost, but I must attempt a vehicle or ship for my next go round. My family would also like me to do something original. I think I would enjoy designing something original and maybe I will attempt such a feat. We shall see. 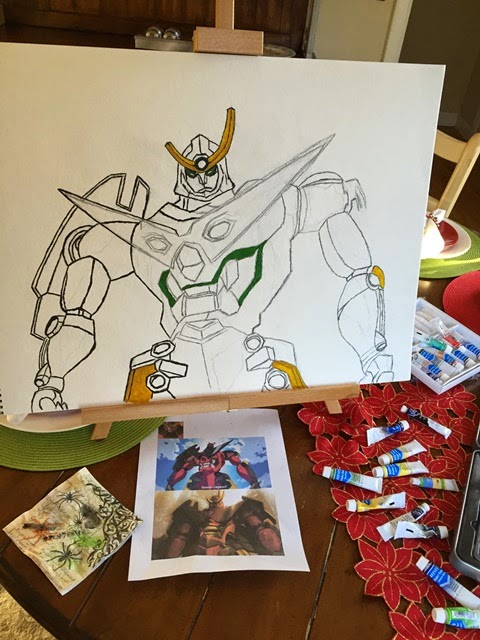 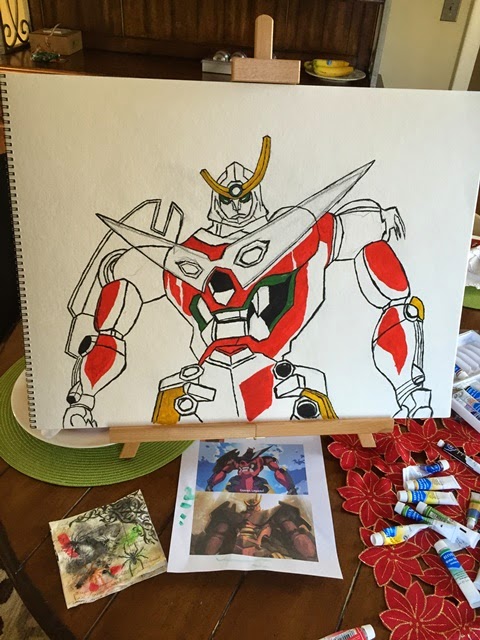 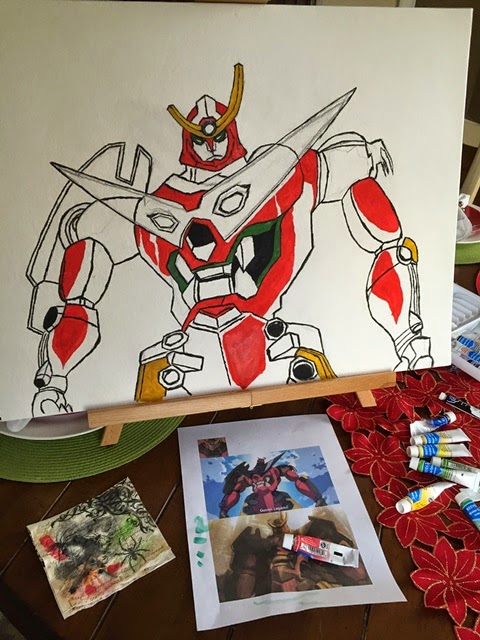 And why watercolor? For whatever reason I just like the idea of working with watercolor. Some of the anime artists out there will often approach their work with a more watercolor like quality rather than the traditional manga look of pencil and lines. Makoto Shinkai is a good example of this kind of animator. I suppose I love the whole idea of the manga pencil affect created in Japanese comics, but attempt to use watercolor to create that look. But of course I don't pretend to be the skilled artist these true artists really are.

This year, after a two year hiatus from painting, I approached the painting effort a little differently and found that it did NOT work for me. First, I received a new painting easel from The One To Be Pitied. Apparently she makes every effort to facilitate my efforts as a source of amusement. It's the first time I've ever used it. The previous three were sketched out flat on the dining room table. This time I utilized the easel on the table. I was feeling like a real artist. Ha, but a mere façade to the truth. 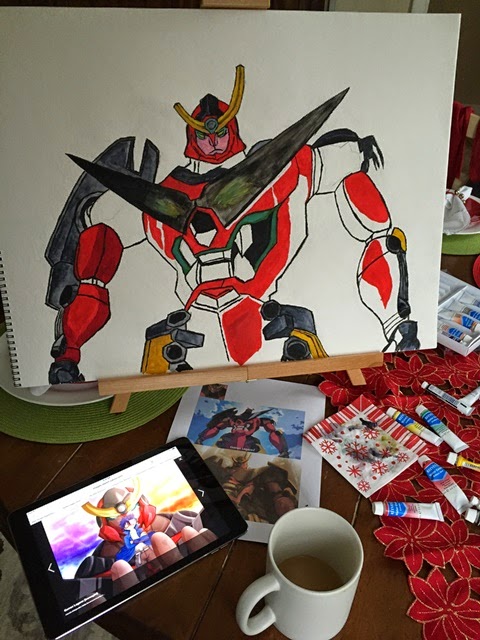 Second, I sketched out the piece essentially using two reference pictures with an assortment of about five to seven other images off the web. You can see my Ipad in one of the images. In fact, it's kind of interesting to see the little differences in the photos contrast with the end result. Coffee, wiped paint, Halloween napkin for wiping and so on are all in evidence.

Third, once the image was sketched I decided to darken the lines first. Attempting to create a nice thick black, manga-like border, but ultimately it did not work for me. 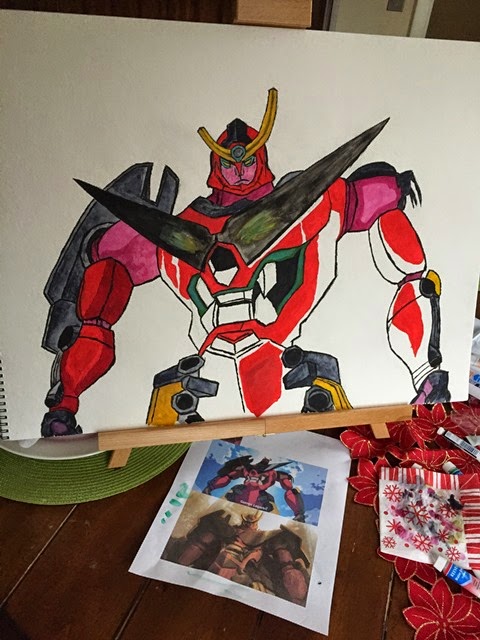 Fourth, when I began painting the black lines really did not help at all and I essentially ignored them.

Finally, when the work was completed I wound up using black paint anyway to highlight bordering effectively doubling my effort. Also, if you look closely, I altered some of the color schemes here and there as I progressed. One example included the face. It was just too damn pink originally and my gut told me it was all wrong. Even if it was meant to be pink I didn't care for it. I felt as though I got it mostly right in the end (for me). And I took some artistic license here and there with the sunglasses and other points that were difficult, but I think look more like artwork as a result, which is kind of nice. Dang! I still need to work on those backgrounds! 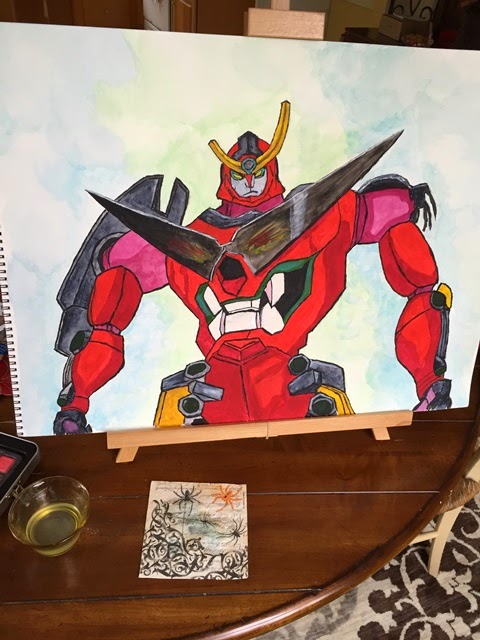 By the way, I made the mistake of taking pictures with my phone rather than my camera like I do when I cover the different series for posts. Oh well. 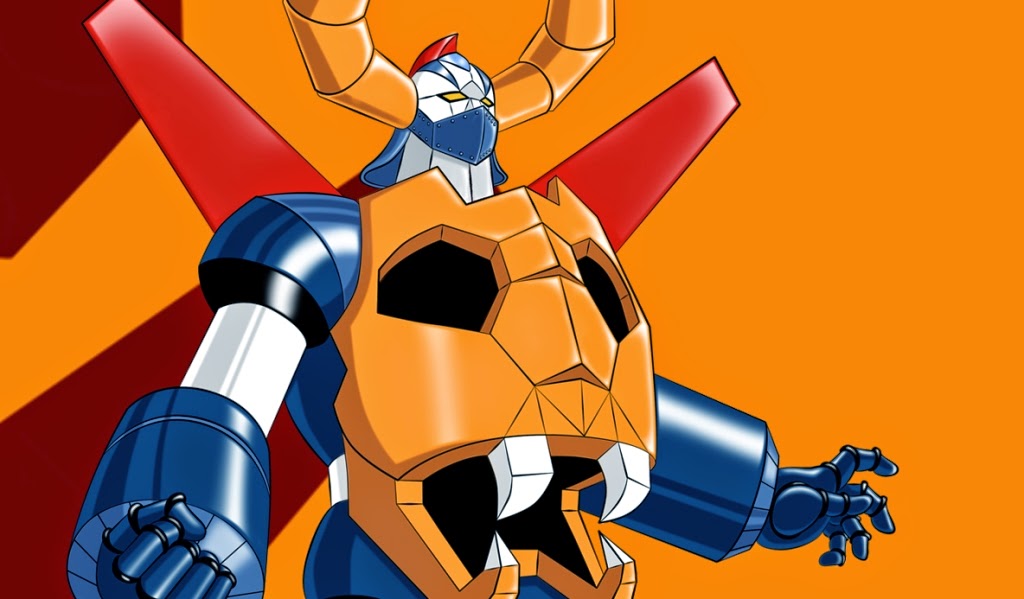 One of the things I loved so much about Gurren Lagann (2007) is that it was such a retro throwback to such classic robot designs found in the likes of series like Gaiking (1976-1977) some two decades earlier. I've included an image as a reminder. The face, the horns and even the use of wings in some Gurren Lagann images take you right back to the creations of the 1970s. I love that about this series! 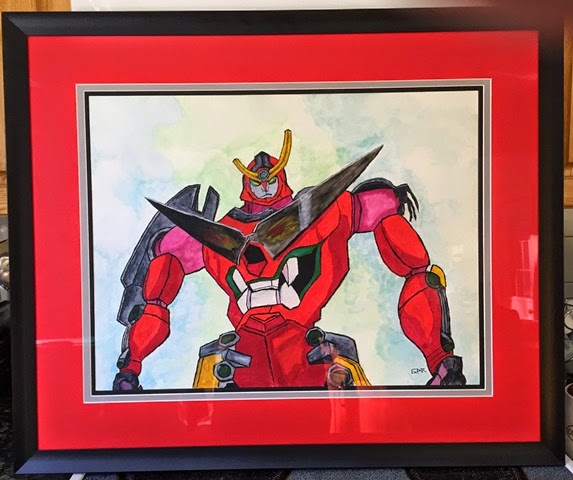 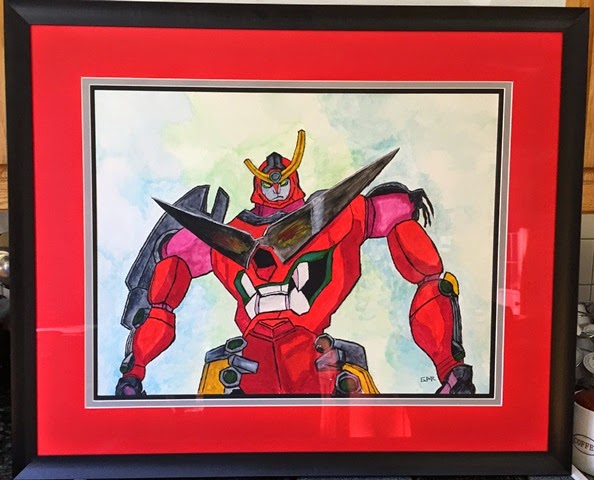 Oh and I would be remiss if I didn't say what an excellent job the folks at Michaels do on framing. They are so extremely helpful and often assist on the color combinations for the appropriate frame. They kind of guide the way on it and it's kind of fun working it out with them.

So for my next trick I'm actually considering the Daikyu Maryu, the very ship that forged the creation that was Gaiking.

And speaking of Gaiking I have some fun posts coming soon featuring the great Gaiking for fans of the classic series and more classic anime.

On that note, I have put away the paintbrushes and I have more posts in the cooker. So more to come. Okay, you can stop chuckling now too. 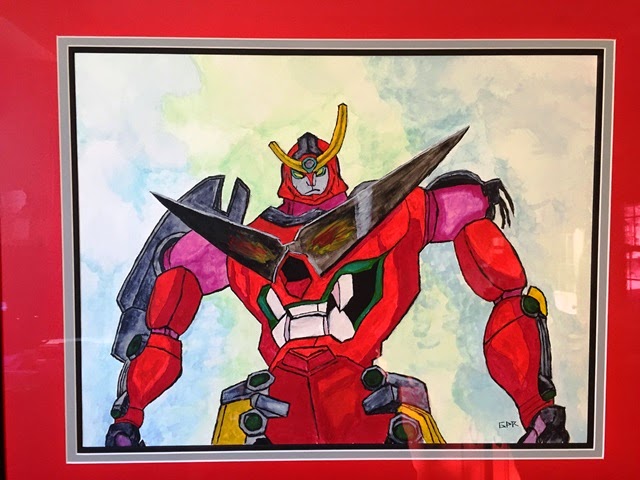 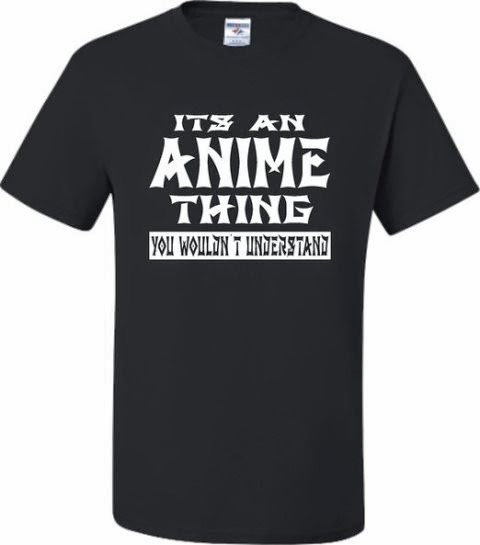