Battle Of The Planets: The Vehicles

As far as I'm concerned a fully imagined and well-conceived idea generally meets all of the criteria, soup to nuts, regarding every facet of any given production. 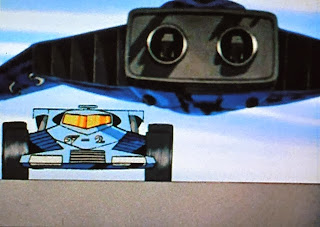 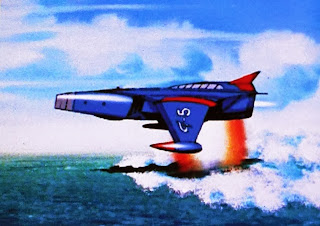 Thunderbirds, Space:1999, Star Trek: The Original Series and even Lost In Space were all successful on the character front, but just as importantly, these series excelled in production design, costume design, design of mecha and detail of weaponry in general.  Truly awesome, thoughtful ideas were fully executed, realized and brought to striking life with all of these programs.  The U.S.S. Enterprise, Thunderbird 2, and The Eagle are just a few examples of vehicles that never grow old or tire.  These designs have stood the test of time and toy models, kits and die cast creations are released repeartedly far and wide and continue to sell.  Gatchaman (1972) and thus the redacted American version that is Battle Of The Planets (1978) easily falls squarely within this category. 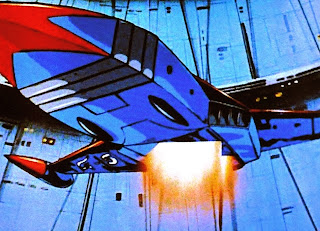 To this day, I bask in the glory of several resin kits for The Phoenix, G-1, the Red Impulse, G-2 and G-3 that I hand built and painted. Truth be told, I've yet to complete the G-2 and G-3.  Unfortunately, I missed the opportunity to purchase the G-4 Club M resin kit when it was available.  You can't win them all.  I've since picked up several die cast creations for The Phoenix, G-1, G-2, G-3, G-4 and the Red Impulse out of Japan.  They are prized in the fan cave and rank among the very elite of science fiction vehicle designs.  I hold them in high esteem. 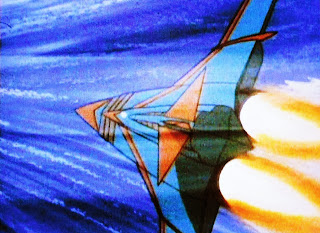 With Gatchaman another beloved ship design was born in The Phoenix and one that could even transmute into The Fiery Phoenix.  But it didn't just end there.

Like the Galileo, the Chariot and the Thunderbird 4, all vehicles which fit snugly, housed and secured within their respective, much larger vessels, were something special to behold in their own right. And thus The Phoenix was a magnificent craft with a cargo hold brimming with fantastic rides. It was blessed with an arsenal of terrific mech within its mighty, powerful and beautiful red and blue frame.  No less than four vehicles were secured within the G-5.  Let's take a closer look as we continue the Battle Of The Planets primer with G-Force's arsenal of specially equipped vehicles. 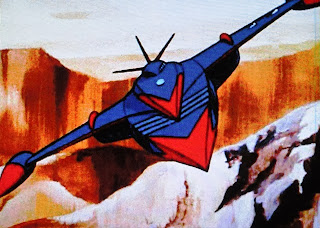 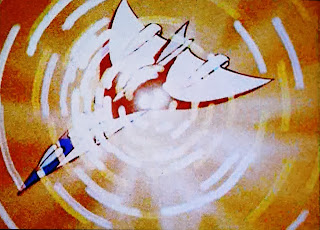 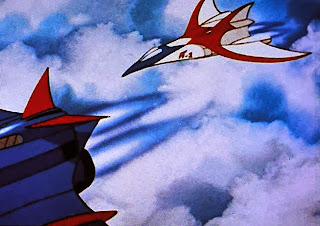 The Phoenix speed without secondary vehicles is roughly 80 knots by air and 40 knots by water as the jet intake valves close.

The Phoenix speed complete with vehicles is Mach 5. Go figure.

The cargo area can hold approximately 200 people (see Episode 42, Keyop Does It All). 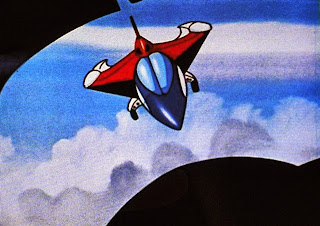 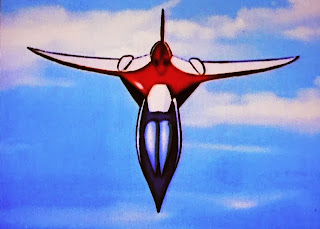 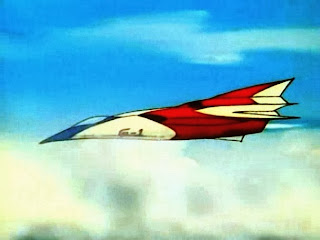 The Summit Jet. G-1. Mark's vehicle.  The sleek white red and blue craft is housed within the rear tail section of The Phoenix.  It is armed with a state-of-the-art twin laser cannon.

It's speed is Mach 4. It is disguised as a single engine Cessna prop plane before transmute. The Summit Jet can also fly underwater like The Phoenix. 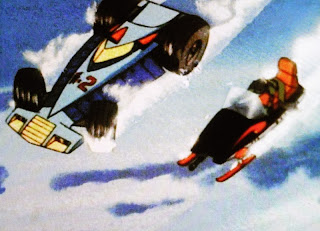 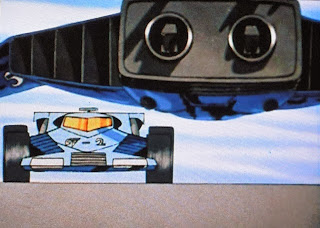 The Space Mobile. G-2. Jason's vehicle. It is housed within the nose of The Phoenix.  The Phoenix looks particularly beast without the G-2 (see photo).  The car is armed with a 20mm Gatling gun hidden within the front of the car. The front of the car literally slides ever so slightly apart to reveal the weapon.  As a kid, it may have been hands down the coolest thing in the series.

It's speed is 1,000 kph. Tires and plastic alloy and/or glass comprising the vehicle is also puncture proof.  It is disguised as a 2000 GT-class stock race car before transmute. 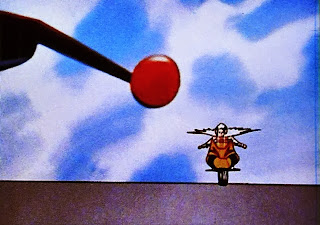 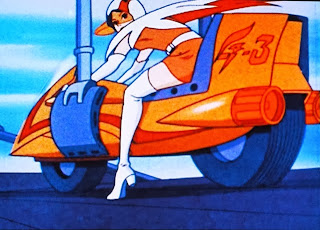 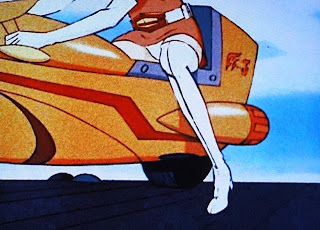 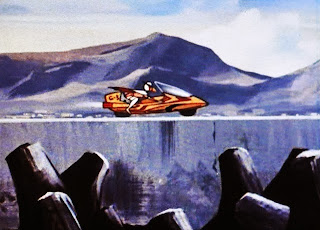 The Galacticycle. G-3. Princess' vehicle. Housed within the left float/ fuel pod of The Phoenix. It is armed with a twin rocket launcher. Front wheel includes skimmer attachment for water. The high-powered bike also comes with a clear canopy shield when required for additional protection. It's speed is 700 kph by land and 200 kph on water. It is disguised as a 700cc-class motorcycle before transmute. 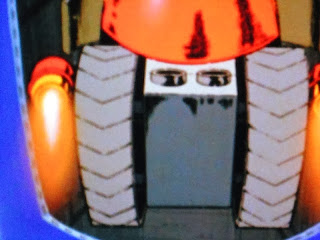 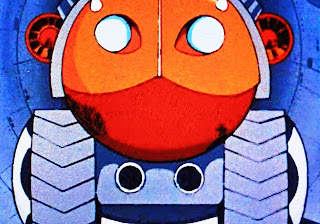 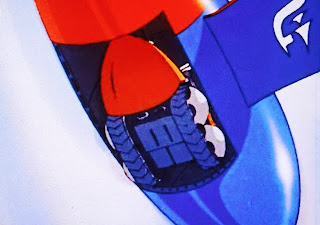 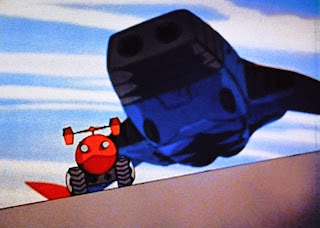 The Star Buggy. G-4. Keyop's vehicle. It is housed within the right float/fuel pod of The Phoenix. It is equipped with bombs, nets, slingshots, drills, buzz saw, periscope and cutter wheels.  It's a veritable smorgasbord of fun with this thing.  It's also large and robust and capable of carrying more than just one passenger when required in a pinch. It's speed is 200 kph. 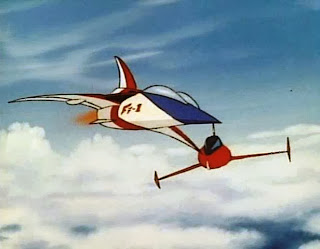 The Red Impulse. Colonel Cronus vehicle.  Mark's father's sleek Red Impulse is not technically part of the G-Force team, but he's playing for the good guys.  His Red Impulse is bad ass and quite frankly could give the Summit Jet a run for its money in speed and design.

Oh, and just how exactly do those vehicles transmute?  These machines are allegedly built with a plastic composite that alters form at a given frequency (3,600 MHz) - the same frequency required for G-Force members to transmute from civilian garb to Bird-robe.  I don't write the stuff, but I buy it. 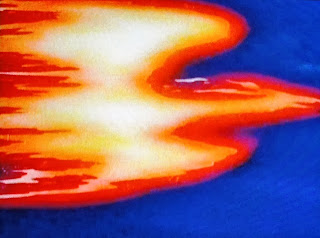 Now on with the show.

An image of the Fiery Phoenix from the live action film of 2013.  I intend on seeing it one day but despite this really cool image do not have high hopes at all.

This is great, thank you!

Awesome. Thank you for saying.