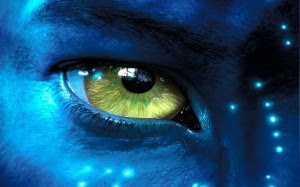 I like to let things simmer down a bit before I take the plunge. I don't fall prey to the hype and buzz that surrounds the so-called latest and greatest craze. I just don't. Heck, I haven't even seen Farscape in its entirety. By waiting things out it allows us to take a more neutral, unbiased, uncolored view of the product I think. I think some of those energies can really shade our opinions. After the craze fades, you just walk in and take it for what it is.

I unwrapped my plastic 3D ray bans and sat back with popcorn in hand, extra salt and extra butter [you only go this way once] and prepared myself for the film of a lifetime. That's what we've been told. Let's face it, it's been pretty pumped up and is now the biggest selling film of all time. Director James Cameron's much anticipated Avatar begins.

My very first reaction was, and I literally said this to myself honest to God, "we've come a long way since Space:1999." Don't get me wrong, I love those traditional, campy ;), miniature effects of the classics and I'll take that science fiction over and above the CGI science fiction any day, but this film was something bold and different visually and reason enough its getting all the attention.

The virtual world of Pandora was the film. The character and the life forms that populate the fictional planet of Pandora were the highlight for me. The story was simplistic. There wasn't a whole lot there to challenge the mind here, but what was up there on the screen was a fully realized, foreign planetary body of visual candy and well worth the visit.

It's clear, unless you're brain dead, Cameron's served up his take on corporate American greed and the military. His politics are certainly built into the film. There's the military campaign against the native Navi people that he equates to a "shock and awe" effort. The military also strikes first against this peaceful planet and as the native inhabitants amass a return volley the marine commander indicates he will fight "terror with terror." Well, the variables in this film aren't exactly the same as those found in our own global war on terror, but he makes his case with dialogue and Pandoran symbols. We get it James. We're killing the planet. We're [especially Americans] bad people. No one else appears to be polluting the planet. We got it. Was I rooting for the Na'vi? You betchya! It's hard not to, but I didn't exactly relate to the marine-like goons with the intelligence of a hammer portrayed on the screen for Avatar. They were nearly inhuman. Still, as I thought about it, this is nothing new. In Aliens, Cameron's marines were doing the bidding of an evil corporation on an alien infested planet as well. After all, we were colonizing off world with a covert imperative to inevitably gain weapons technology by extracting the local xenomorphs. It wasn't even a problem if folks got impregnated. Again, corporations bad. Oh, and Ripley, played by Sigourney Weaver who appears in both films, was originally a scientist there like she is here in Avatar. Anyway, we got what we had coming in Aliens, but we weren't brow beaten with the message . Avatar takes Cameron's message to another level, and is about as subtle as a Pandoran rock fruit to the head, but it's still a damn fine film. The intended, not-so subliminal politics aside, there is a vibrant, colorful film that is a truly amazing visual, visceral experience to the senses.

To prove my point, James Cameron has had a few remarks in the press regarding American culture that are not exactly positive. This is one of them. "Really what this film ultimately does is hold a mirror to our own blighted history, where we have a culturally advanced civilization supplanting more “primitive” civilizations. Some of these civilizations and cultures have a lot more wisdom than we’ve shown. We just have bigger guns. We have ships that can cross oceans, we have horses and armor. And this country we’re in now was taken from its indigenous owners. And it’s kind of owning up to our own human history."

All of that aside, Cameron can make movies that move. By the way, those same people he's quick to reprimand are the same people distributing and promoting his film. The fact people are buying up his tickets in every concrete-built theatre house doesn't seem to be a problem. Trust me, we're all part of the problem, but so is Cameron. I'm making the point because it's hard to dismiss it because it is so woven into the fabric of his story. It's worth the discussion.

As entertainment, the film must be seen in 3D. It's worth the few extra dollars. One of the biggest highlights for me was the layered depth of the planet Cameron created in Pandora. The colors, textures and vibrancy of this bold new world is a joy to behold. In 2D it's clear you would miss some of the splendor, shock and awe of what he was trying to achieve. I remember writing about the much anticipated trailer and being disappointed by it visually, but cautioning that it might actually prove out to be much more explosive in impact in 3D. This rings true and 3D is the only way to see it. His 3D camera technology is so state of the art that it's fairly seamless in the viewing experience. You are part of the picture not distracted by it like the old 3D gimmicks [Jaws 3 3D anyone?]. Avatar won't look as good in 2D. It's that simple.

There were questions I kept asking myself as the film progressed that I have since forgotten and they just never get answered. Still, these shortcomings aside, the picture is an experience. The story, while simple and effective, is thankfully overshadowed by the power of the visual experience, the creative world and the stunning details of Cameron's Pandora creation. The tribal culture of the Navi reminded me of some of what I saw recently in Apocalypto. I enjoyed those details immensely in both films. In fact, it's interesting how the jungles, plants and waterfalls are captured in those aforementioned films in two uniquely different ways.

Avatar is unfortunately not the greatest movie of all time, but these things are subjective. While I'm a sci-fi fanatic it's not my favorite science fiction film of all time. You can give me a crashing Eagle One into dirt on a model set any day. Cameron's heavy-handed message aside, I did enjoy the picture. As a viewer I can relate to and appreciate the humanitarian bent of the film. Avatar is a solid adventure story. In the end, some folks clapped, some didn't. The Boy Wonder did a little. Pandora is worth a look. It's a tremendous work of art.

Oh and one more thing, it's a damn sight better than the dreadful Michael Bay turd Transformers and that made a killing. At least this picture is worthy of its achievement.

I'm on a commenting roll today. ;)

I saw Avatar 3D too, and I have such mixed feelings about this.

The technical part of it, the 3D, the visuals, Pandora, all that stuff - amazing. Never done better, of course, and really awe-inspiring to look at. Even a few of the trailers before the movie were in 3D, and I also thought this was a huge step in the right direction. 3D is obviously here to come. And we just got HD on one of our major channels here in time for the olympics..

Then we come to the parts I didn't like so much. As you and many others have pointed out, the plot is fairly simple - we've seen it before, hundereds of times. But Cameron at times gets so preachy that I want to to pour a barrel of quicksilver on a lapp (that's our version of the indians, the old raindeer-lovers that lived here before us civilized folk) just to compensate. Oh yeah, corporations are evil. See Team America: World Police for a good commentary on this tiresome theme and a few others.

What I would actually love to see is a movie where some hippies want to tear down the evil corporation and turn out to be really wrong. It probably isn't a great base for a movie, but it would be SO refreshing. :)

Anyway - Avatar - probably on my top 30 of the decade for the technical achievements, but the story gave me little.

I see the roll. [MORE LAUGHTER].

Thanks for your thoughts on this one H! I'm glad I'm not alone. Cameron is just so damn preachy it's a touch painful.

I should watch it again. Some of it is very very good, even the performances are solid, especially the actress who played the Navi girl. But it was generally forgettable unlike Wikus in District 9.

Your suggestion for a movie idea is absolutely freakin' classic. It's hysterical and you know, it might just work! It's out there and clever. Hmmm, we should start scripting immediately.

Yeah, we should definately go for it. I love really random stuff. As an example, see The Sarah Silverman Program episode from last week, Slip Slope (or something), when the crack guy draws the garden show guy. It is completely moronic, yet I couldn't stop laughing.

Anyway, so the hippies break into the evil (in their opinion) corporation..

[CORPORATE TYPE] Not so fast, weedo! Those animals are held in protective custody!

[H] You can't cage animals, man! They deserve their freedom as much as we do!

[CT] These animals come frome some place where some ancient graves or something were unearthed, and some frozen corpses that died of some kind of plague long ago or something, and with the eating and the infection, and this isn't in our immune system anymore, so we're all gonna die unless we extract some stuff from the animals to make medicine. Yeah, sure, we'll also make a profit, but it's for the good of humanity. Humanitarians, that's what we are.

See? It practically writes itself. :D

If you want to learn more about the man who has the golden Midas box office touch here is a profile on James Cameron posted by the UK film website Flickering Myth.