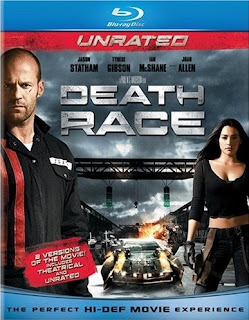 You'll recall my gushing love affair with the guilty pleasures of Director Paul W.S. Anderson [Resident Evil, Event Horizon]. Well, the husband of Milla Jovovich [he must get that alot]created another not so particularly pretty picture of the future, and they are bleak, with Death Race [2008]. 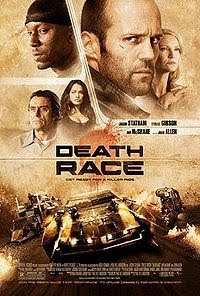 Death Race is a gritty, raw, violent tale of survival as only Anderson can bring it. There's a solid, if routine, performance from action hero Jason Statham. He keeps the cool factor cool behind the wheel of a heavily amped up, souped up, super-charged, weaponized Ford Mustang. If you're a metal head or a grease monkey or a movie fan like me who enjoys a bit of escapist entertainment from time to time this will probably be up your raceway. I'm not overly crazy or fond of the slasher pictures like Saw and other senseless violence and this is borderline stuff too. They have no real value to me and neither does this. It's a simple[ton's] tale [boy what am I saying about myself?], but it's a great way to check out for awhile. Anderson always executes the nonsense well.
I point to this guilty pleasure for one additional reason, the inclusion of my favorite actor in the world, the most underrated Ian McShane. Mc Shane hardly has a role in the picture. It's minor, but he certainly injects a bit of class into the picture like a fuel-injected engine. The man simply has presence and whatever he says sounds good thanks to those God-given pipes. He gives a bit of respectability to Anderson's film. Here's one of his finest moments. It may also be one of the quietest moments without the ignition of an engine. Still, McShane makes his own noise by just showing up.


*
I'd say see the picture for Ian McShane alone, but his role is relegated to a such small supporting part as the head of Jason Statham's pit crew that may not be fair. McShane needs to help "Frank" a.k.a. "Frankenstein," played by Statham, survive the race. McShane is just brilliant and unfortunately, in good conscience, I can't recommend the picture for his role alone unless you are a fanatic like me. You have to like cars and violence. That's why it's called Death Race! I couldn't tell you a thing about Roger Corman's orginal Death Race 2000 [1975], on which this picture is based. This is essentially the new state-of-the-art road model.
*
By the way, regarding McShane, his line in this small bit is so good, it's almost like he's referring to the film business. He's just having a bit of fun with the variety of roles offered to him. SPOILER included so don't watch this one if you plan on seeing the film. Of course, if you have a memory like mine it won't matter. It's like reading a book. I could read it again a week later and it would all be new to me.

You should definitely check out cult hit Death Race 2000. It's not well made and it's not well acted, but you know, it's got a kind of satirical intensity that reminds me of Robocop.

And it's really strange. I'd love for you to compare the two.

I'll put it on the list Siskoid! Thanks for your input. SFF