Whilst enjoying Star Trek: Discovery (2017-present) Season Two (the series continues to be uniformly exceptional) including a reinvigorated Captain Christopher Pike, played with precision by Anson Mount, it unexpectedly tied me to a look back at the original Captain Christopher Pike from Star Trek: The Original Series pilot episode The Cage (1965). 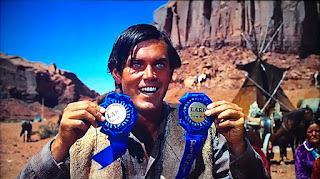 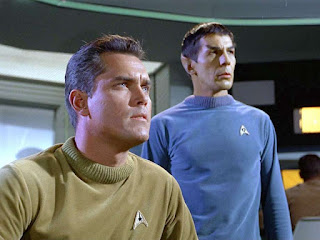 A recent viewing of the John Ford-directed, John Wayne helmed classic The Searchers (1956) presented an opportunity to share some pictures of the man in this real, non-space Western for the role of Martin Pawley, one of the stars of the historic film. 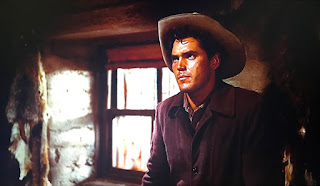 Sadly, Hunter did not live long and prosper passing away at the ripe young age of just 42 in 1969 following complications resulting from a film's on set explosion. 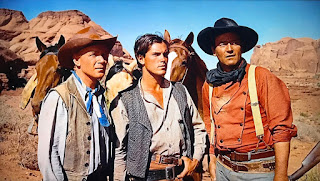 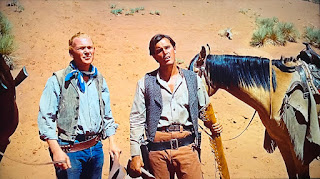 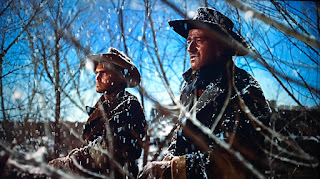 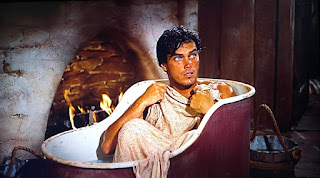 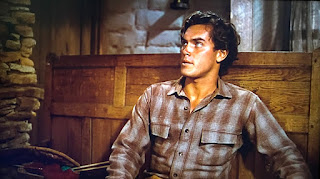 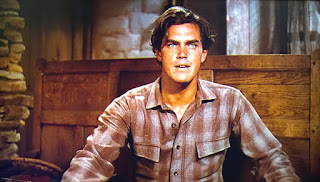 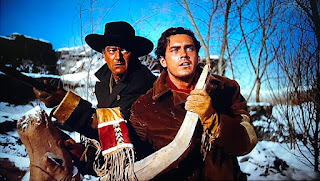 If I were to offer a list of thought provoking science fiction versus the mind numbingly dumb variety, I Am Mother (2019) would be in the former slot. Lost In Space (2018-present) or even worse Extinction (2018), would find themselves in the latter pool of stinkers. To be fair Lost In Space isn't that bad. All are on Netflix. Proof there is indeed something for everybody there. 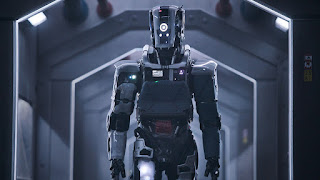 Netflix also features one of the most under the radar science fiction television series to arrive in some time in the form of Another Life (2019) featuring Katee Sackhoff. All of the buzz and press surrounds the channel's reboot of Irwin Allen's Lost In Space (1965-1968), but that lacks any of the charm or character of the original series and is generally intended as pure action adventure.

Another Life delivers the character and intensity of solid B science fiction in spades with continued, real potential for its second season to come probing and venturing into actual science fiction. Amazon Prime's The Expanse (2015-present) continues to explore the same kind of quality science fiction with its thrilling fourth season released at the end of 2019. Star Trek: Discovery (2017-present) Season Two also picked up its fine run right where it left off. 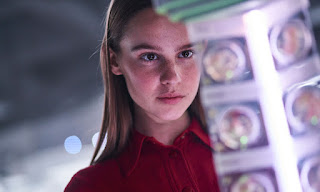 Like Another Life, on the unpublicized path of quality science fiction out there for discovery is I Am Mother (2019), a film released the same year as Another Life.

I Am Mother stars Hillary Swank and Rose Byrne (Sunshine), note perfect as the nurturing voice of "Dozer" droid Mother. The other big star of the film is young actress Clara Rugaard who carries much of the dramatic weight of the picture reminiscent of a young Natalie Portman (a la Leon The Professional). 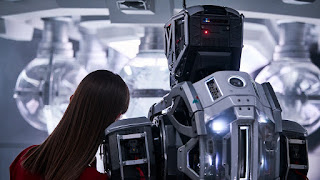 The dynamic between her character and that of the maternally warm voice of Byrne is the true highlight of the picture. It's a kind of female counterpoint to Lost In Space characters' Will Robinson and Robot from the 1960s for a new generation.

The dynamic between the three female principals in the film is suspenseful and intense, while the mood and music of the feature is note perfect. The robot design and effects work in the film is equally fantastic as is the production design on internal and external shooting. These are all aspects to the fully immersive, thoughtful science fiction experience here. 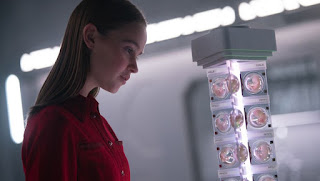 Following a mass extinction Mother nurtures and develops her young protégé to rebuild humanity. The daily life and routines between Mother and child are interrupted with the arrival of Swank's human interloper.

The film questions the intentions of the artificially intelligent (birthed by humanity) Mother versus the seemingly inevitable inclination of humanity's penchant for self-destruction.

What has happened to Earth? What are Mother's programmed directives? What are the interloper's motives? Who is the villain? Many questions are answered as the film reaches its thrilling conclusion, but there is indeed a lot to chew on throughout the journey of I Am Mother. Much like the quiet gestation of an embryo's growth, the film lovingly takes its time with every shot in taking us on its journey. 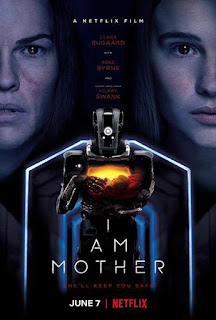 It's the kind of riveting, suspenseful science fiction that made a film like the cerebral Ex-Machina (2014) so effective.

It is an intimate tale on the evolution of artificial intelligence and like the aforementioned film is thoroughly engaging throughout the film never losing momentum to a wasted frame or shying from embracing its stirring moments of solitude.

I Am Mother is an exceptional, isolating, often pensive science fiction film with fits of excitement. It's gems like this one, thankfully arriving in a world of superhero noise and preposterous Disney Star Wars spectacles, that give our brains a chance to process instead of merely shut down.

This is science fiction with something to say. It is a feast for the eyes rather than a confusing CGI mess of a movie.

This father highly recommends this mother.

Another Life: The Critics Have It Wrong (Again)

When the critics have a series set in their sites it sure seems the knives come out and they are sharp. An example: Another Life (Netflix) (2019-present). The new series stars beloved female genre actress Katee Sackhoff (Battlestar Galactica, Longmire). 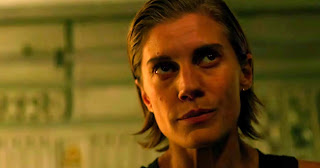 To some degree, if you're like me, her name attached to just about anything catches your attention. It doesn't mean it's good (The Last Sentinel), but you at least want to see for yourself and even be pleasantly surprised (2036 Of Unknown Origin).

The reviews are still coming in and the series is teetering on the cusp of an accumulated overall positive, but there are plenty of critics out there ready to bury the show before it has even had a chance to breathe. 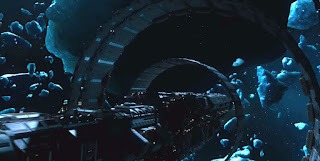 Lost In Space (1918-present), Season Two, also on Netflix, has better reviews and this science fiction fan will never appreciate or understand why. Sure the Lost In Space adventure series has a load of cinematic appeal from gorgeous visual effects to Marvel-style action adventure, but not a whole lot of intelligence despite the story centered on the alien intellect of its Robot. Season Two proved to be more of the same unchallenging drivel as the first and there's always an audience for it. But by and large its an empty-headed adventure to me.

Meanwhile there's Another Life and a recent review had it pegged as one of the 20 worst shows on Netflix. Who writes these things? Where is Lost In Space then? 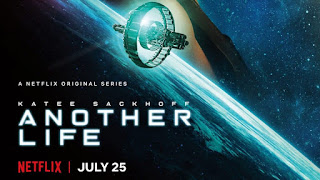 I've seen all of its first ten episodes in their entirety and, yes, while there are moments of homage to any number of science fiction classics Another Life is still carving its own path and establishing its own identity. It is equal parts suspenseful and interesting while delivering on moments of intense excitement and outer space adventure. But there is a much less family-friendly tone to Another Life. There is indeed a creeping darkness to the journey and its compelling internal mystery surrounding an alien artefact keeps you gripped to the story.

Sackhoff doesn't disappoint, but neither does the extensive supporting cast of fine performances, which can sometimes fail a series. 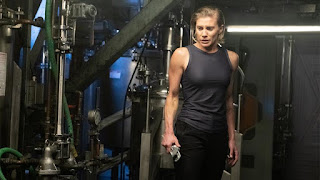 The story ideas are solid. The writing is good if imperfect, but sometimes very good. Episodes can stand on their own, but work to thread the overarching story together.

Another Life (an admittedly flat title that shares its name with a 1981 soap opera) was renewed for a second season thankfully. Please see it for yourself. Don't believe the naysayers. This is a completely solid genre offering, a science fiction adventure mystery that works and I am fully on board and impressed.

Some of the same critics who have Another Life unfairly knocked down are in full support of the utterly lost, action-packed nonsense of Lost In Space. They couldn't be more wrong.

This writer and fan of thoughtful science fiction is glad he thought for himself on this one. Another Life is another fascinating if unexpected entry in the long history of good science fiction with a more serious tone associated with the likes of Colony (2016-2018), The Expanse (2015-present), Stargate Universe (2009-2011) or a film like Annihilation (2018).

As science fiction fans, let's hope it finds further life support in the years ahead. This life has potential.
Posted by SFF at 9:27 AM 2 comments: