Where the heck have you been? Hello folks. I took a bit of a break at Virginia Beach. I had hoped to still have some time to post but it really didn't work out that way. So it was a beautiful break. It was even cloudy at times which I welcomed. It's funny how the blog just sits there. Like a garden it's much more alive when given attention and tended, but the kids come first. 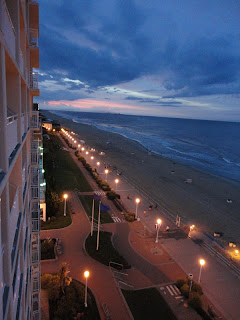 Actually getting back into the swing of things is taking some effort as well. I lost a little momentum there. Just a little too relaxed I suppose.
Well, just to share, there were loads of nice moments along the way. Mr. Pibb. Busch Gardens. The Verbolten. Apollo's Chariot. Smoked chicken. Colonial Williamsburg. The Boardwalk. Endless military jets. Leaking hotel room. Broken elevator. Pocahontas Pancakes. Catch 31 with a fish head on my plate. Driving and more driving. Traffic. Loads of laughing. Crashing the waves. Schools of Dolphins jumping. Good people. These were just some of my experiences over the week and the things that immediately spring to mind. I thought I'd record them before it all becomes another wonderful, but vague memory.
The One To Be Pitied instructs and work lured her to Falls Church, Virginia which was the springboard for a diversion. I turned it into a much needed vacation. Did you know Virginia is for lovers? That always cracks me up.

I spent time reading Elisabeth Sladen: The Autobiography while looking at the ocean. The late but always lovely Doctor Who actress' autobiography is a splendid read by the way and she spends a large portion of the book on her years with Jon Pertwee and Tom Baker. Her insights with the two men are fascinating. Some of her quotes will make future posts here. Funny enough, I'm a terribly slow reader and read at my best pace while on a holiday, but get back to reality and it all comes to a screeching, turtle-like halt. It's quite unfortunate.

So I've been consumed of late with classic and new Doctor Who. I can't seem to get enough of the series. I haven't spent a whole lot of time writing about it, but rather just enjoying the madcap nature of the series' quirky lead and the many unpredictable turns in story. Christopher Eccleston's version of the Doctor has been a howl and his work along with companion Billie Piper has inspired me to prep some Series 1 for a future entry, because I can't just watch and enjoy. I must write now. I'm compelled to do so. I can't stop myself. Russell T. Davies' modern riff and makeover of the classic series is a clear winner and it's easy to see why it launched into a thriving second life. Davies was the right man at the right time and it's clear he was such a fan. The spirit of the originals is updated, alive and well. Listen, I never said I was on the cutting edge and I'll always be terribly behind the times with so much delicious science fiction television with which to invest my time. But I'll always try and bring you the best stuff out there and make it special and Doctor Who is no exception.

Well, I guess that's about all I have for the moment, but hope to get my groove back soon. The images were taken from the same camera I use for all of my science fiction images. As you can see I even tried that panoramic sweep option. It was a lovely spot on the big blue planet, but it's good to be back. Time to get back on the horse.
Posted by SFF at 12:00 PM

Good to have you back. I think Christopher Eccleston's take on the Doctor helped ground the series for the new audience. It let the show get weird and wild without alienating people. He's not the best Doctor, but the best for the time. S7 starting soon.

Still, I do enjoy Eccleston and his own uniquely weird take on the Doctor!

I'd say Tennant is my favorite. tks again Maurice.