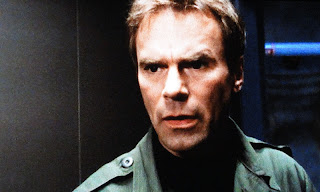 Echoes of the Alien chestburster and other body horror elements resonate throughout the Stargate SG-1 mythos thanks to the delightful enemy that is the Goa'uld [my simple mind has always found that name awkward]. Stargate SG-1, Season One, Episode 2, The Enemy Within gave me the opportunity to write about science fiction adventure without getting overly complicated. This brief look back at the third installment is more in keeping with my original idea for looking back at the Stargate SG-1 series. Unlike my close inspection of the pilot for the series, Children Of The Gods the original and final cuts, I wanted to focus more specifically on the humor of one Richard Dean Anderson in his role as Colonel Jack O'Neill. Anderson brought so much to the legacy of this lasting series and rather than get caught up in the minutia of each adventure's installment I wanted to hit some of the highlights from the mind of one Jack O'Neill to be labelled on Musings Of A Sci-Fi Fanatic as the World According To Jack O'Neill. Anderson infused the character with a dry, irreverent sense of humor and wit. It's clear to see the character was unrelentingly loyal, but managed to bring his own brand of the comedic to the military environment in which he served. Richard Dean Anderson was a big reason why I loved that series so much. 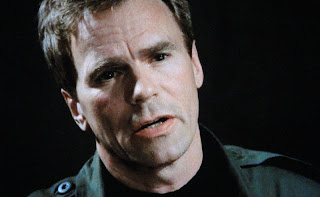 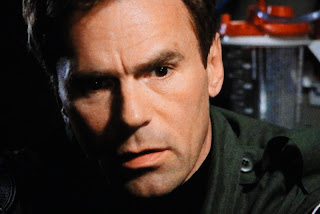 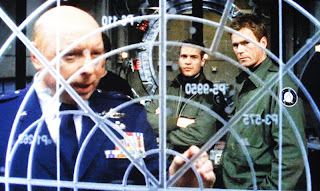 Thus close analysis will be provided to those entries deserving of close scrutiny, but with over 200 episodes I wanted to see if we could look at the highlights featuring Richard Dean Anderson, my favorite character in the series, and also capture some of the very best images from each episode without laboring through its ten season run. Are you with me? 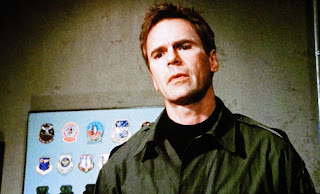 O'Neill brings levity to the idea of each team's need to commit to memory the numerically-applied naming system to each of the Stargated planets. This is classic O'Neill with a terrific, commanding turn by Don S. Davis as the straight man or heavy who still manages to compound the humor in an already funny O'Neill moment. 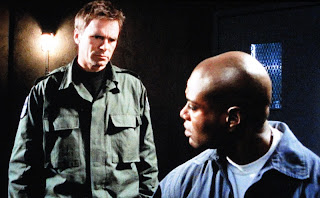 Next, we have O'Neill weighing the possibility of saving his colleague and friend, Major Charles Kawalsky, who has been infected by a Goa'uld symbiote. Teal'c informs the group of the Goa'uld's gift of genetic memory. 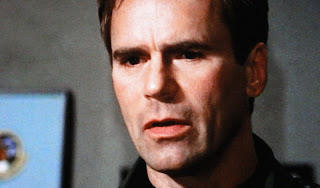 Additionally, the character of Colonel Kennedy also shares insights into the nature of the military industrial complex during his Carter Burke [played by Paul Reiser in Aliens (1986)] moment, when Kennedy discusses the idea of saving the alien specimen essentially for strategic purposes. Only O'Neill could deliver his frustration with government bureaucracy and red tape lunacy with comic perfection. 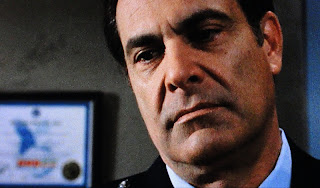 Actor Alan Rachins, as Colonel Kennedy, was positively brutal and brilliant as Douglas Brackman, Jr. on Steven Bochco's L.A. Law [1986-1994] for its remarkable eight season run. Fellow L.A. Law actress Michele Green also appeared on Stargate SG-1 for Season Three, Ep17, A Hundred Days. Finally, O'Neill makes a tender request of his dear colleague while in the infirmary. O'Neill, even in the darkest moments, manages bring levity and joy to the final hours of Kawalsky's life. Would we expect anything less? 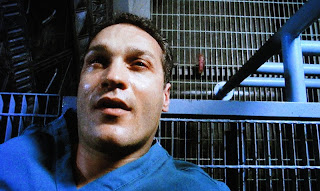 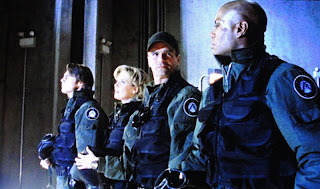 It would be fitting that new member, Teal'c, would replace the old guard, Jay Acovone's Kawalsky, from the film by taking his life and taking his place on the SG-1 team. The Enemy Within is by no means exceptional but remains a solid outing from the inaugural first season. You knew the series was in good hands with Richard Dean Anderson's personal world view to guide Stargate SG-1 and the team. How time flies. It seems like only yesterday he looked this young.


The Enemy Within: B. Writer: Brad Wright. Director: Dennis Berry.

Y'know, I started out watching Stargate SG-1, but dropped it only after a few episodes. Looks like I missed out on a lot of good things re: the show. Fine look at this, as usual, SFF.

With all there is to watch out there I certainly understand not finding time for it.

SG-1 is a very good actin adventure series with its own self-designed universe. You grow to love the characters and just have a bit of fun with it.

I went on a run watching it and I really enjoyed the ten season series but I would submit that it's not for everyone and there are certainly series out there that could trump it for my undivided attention.

But again solid series start to finish and the other franchises are equally good fun my friend. Tks L13!