"Civilians versus military. It's an age-old question." 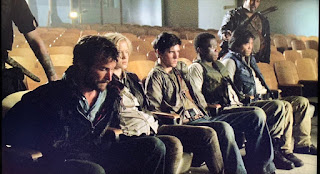 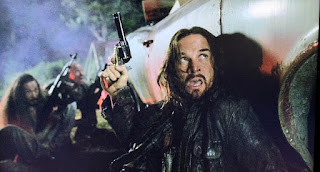 As someone thoroughly invested in The Walking Dead (2010-present) franchise and its rather grim view of humanity, Falling Skies (2011-2015) offers a nice counterbalance. While TWD has its moments of hope that sometimes feel more like a glimmer, Falling Skies has a more optimistic view regarding humanity, community and family. Call it old-fashioned by comparison, but its welcomed. 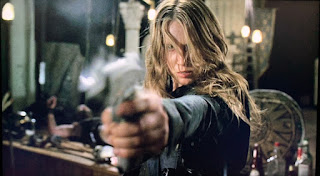 There's a hopefulness to Falling Skies and the way humanity pulls together rather than always tearing itself apart. More often than not humanity surviving in the world of Falling Skies as seen in Falling Skies, Season One, Episode 2, The Armory, is at the fore. It is significantly more hopeful and united recalling the kind of camaraderie likened to the forces that gathered for the American Revolution against the British. Like the military-minded inspiration for the series established by Robert Rodat, it's fitting that future executive producer, Graham Yost, of the spy thriller The Americans (2013-2018), a series focused on a different kind of ground war, should scribe the episode here on top of his executive production duties for Falling Skies. 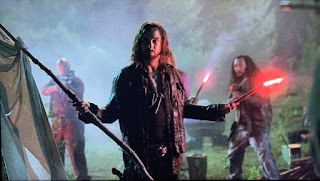 Even the score offers a bit of that old Steven Spielberg magic in its tone and wonder. There are moments where it takes you to reminders of the sweeping wonder of something like E.T.: The Extra-Terrestrial (1982) even if this doesn't rise to the level of John Williams. While Falling Skies lacks the kind of predominant scoring LOST enjoyed at the hands of Michael Giacchino it does however have the kind of musical accompaniment suited for the mythology its building here thanks to Noah Sorota. Giacchino's compositions were a force on LOST, much like the island, but the music for Falling Skies genuinely accents and underscores the mood of the war and the spirit of a people particularly surrounding forces out of Boston and the spirit of 1776. It's big, hopeful and inspiring, while at times propulsive and patriotic. It's a delightful accompaniment to the series. 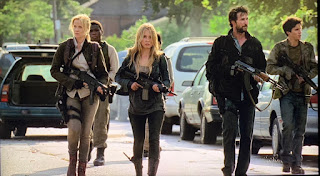 In human terms, Falling Skies has much larger factions united in a common cause. It has its fair share of conflict and darkness in the first season too. The family that is the 2nd Massachusetts runs into a fairly tough rabble of survivors here in The Armory. Some of the scenes honestly feel uncomfortable particularly in light of current events and the current extremism of the cancel culture environment. That's how much things are changing. Further, that's how unnecessarily hyper-sensitive we've become to it all as a result. I couldn't help but imagine scripting might have been different today, but then again some things will never be the same. As it stands it's rather uncomfortably perfect. 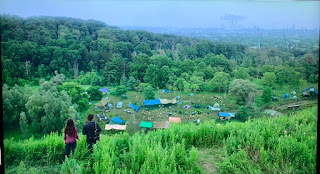 Speaking of discomfort to the ultra progressive environment of today, additionally, the series has a reliance on faith and tradition which really sets it apart from a lot of the science fiction even ten years ago. Remembering that Falling Skies (2011-2015) arrived hot on the heels of the dark view of humanity proffered by the likes of Battlestar Galactica (2003-2009) and Caprica (2010) it does offer science fiction fans a relatively more optimistic perspective on humanity set against its battle with the aliens in relative terms. It's not to say it is without its human fallibility and unsavory factions, but certainly not to the vicious degree The Walking Dead pits humanity against one another. But just as The Walking Dead established the zombies and then the human conundrum as part of the zombie apocalypse, Falling Skies first establishes the alien invasion in Live And Learn, while The Armory emphasizes that we not forget the human conflict and the casualties of a war with one another. 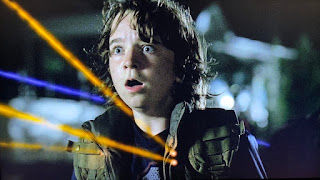 The balance works effectively and provides moments of discomfort and comfort in equal amounts surrounded by varying degrees of effects intensity. It's an expertly well-assembled and well-performed bit of science fiction drama.

The Armory makes for an entertaining, combustible affair as post-apocalyptic criminal outlaws take hostage and then battle the 2nd Massachusetts. By the entry's end the freedom fighters dispatch the baddies, pick up a great new female character and their own wild card in the form of the intelligent John Pope. Actor Colin Cunningham (Stargate SG-1) suitably hams up the role and enjoys scene chewing on some great dialogue to deliver a kind of contemporary version of Dr. Zachary Smith (Lost In Space) a la Jonathan Harris. Likable villains are always in demand. 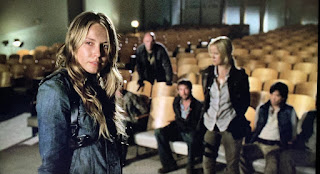 When you consider our current, sharply divided politics and the generally dismal state of affairs culturally it's no surprise that civility is the first thing to go in the quest for power in apocalyptic ruin. We just can't help ourselves. Falling Skies is another to explore these aspects of human behavior as a terrifically serious alien invasion drama that is as entertaining as it is intelligent. 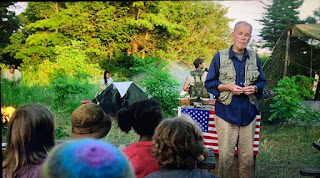 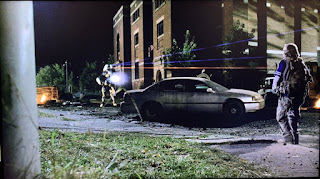 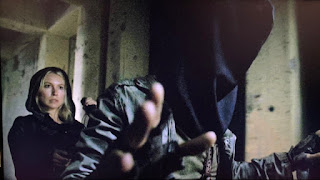