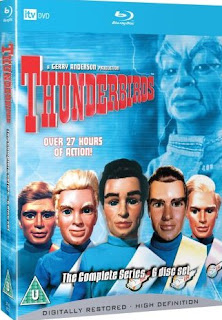 To be or not to be, that is the question. It seems appropriate to quote William Shakespeare's Hamlet for the UK release of Thunderbirds on Blu-Ray.

5-4-3-2-1! It's FAB FRIDAY pilgrims! Welcome to all tidbits fantastic from the world of Gerry and Sylvia Anderson.
The Blu-Ray release of the full Thunderbirds series arrived in September 2008. Sadly, it did not arrive to much applause, promotion or fanfare. It kind of just went about its business, sort of like International Rescue. Of course, what do you expect from a series from 1965? Though, the technical specs applied to the UK-only collection made for a fairly controversial arrival among fans who cared. The series was cropped and sized for 16:9 losing visual information at the top and bottom from the original 4:3. As a result of the underwhelming response to it in the UK, the collection has been a complete crash and burn regarding a possible release in the US. The Eagle was launched on Blu-Ray stateside for Space:1999, but Thunderbirds were definitely NOT go!
Despite it's crisp new box art as shiny and bright as some of those cropped images I've seen, it wasn't enough to see fans coalesce around the release with unified support. It's a bit funny pondering the technical merit of a Blu-Ray release, but the fact of the matter is these technical issues arrive from time to time and fans of film and television absolutely lose it when the DVD producers and studios take little care in getting it right. That, and it's FAB FRIDAY. The Killer starring Chow Yun-Fat has been forever in debate with each and every release. How about Farscape's recent arrival on Blu-Ray? There have been more than a few complaints on a whole host of productions. Try getting a decent American release on a kaiju eiga picture from Japan. Getting it right for the fans is of little consequence to the studios and that's unfortunate since many of these products are going to be marketed to them.
Anyway, it's all rather trivial I suppose, but when companies have one shot to get a series right like Thunderbirds why not seize the moment. Obviously, getting it wrong leads to double, triple or even quadruple dipping. Could that be by design? 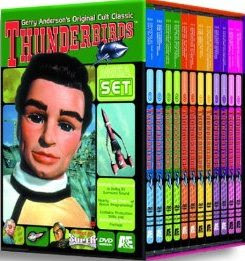 The general consensus runs the gamut from fans. "Beautiful... but butchered." "As bad as pan-n-scan." "Cmon this is a classic art ... not the Teletubbies." "The quality is FAB." "Another wasted opportunity." "A complete mystery." "Approximately one-third of the original image is missing." "If it's 16:9, they can shove it!"
Fanderson's FAB magazine, FAB #61, puts things in perspective with a fair review. Writer Nick Williams notes the Blu-Ray treatment wasn't handled with as much care as the Space:1999 Blu-Ray treatment of Year One.
Williams notes it looks "amazing" with sharp details on those aspects of the original image that do actually make it within the frame. It's a bit like looking at a sculpt by Robert Harrop. Strings and other details are more pronounced than ever a la the Star Trek: The Original Series HD clarity. Still, other details are noticeably absent and out of frame. Williams discusses the "haphazard" cropping as the approach was essentially "set and forget."
The soundtrack too has major question marks unfortunately. The writer notes the always reliable mono track is completely omitted in favor of uneven 5.1 and over saturated stereo tracks.
There are also very few extras. There's one big new one, but many of the highlights from the DVD collection are not available here.
He even notes the cover art, sporting the Kyrano character in the background even seems an odd, ill-informed and novice choice by the designers. 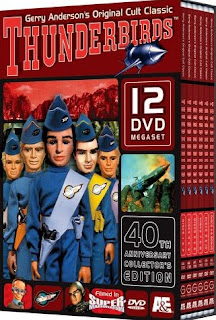 It has been suggested this collection is possibly Region-Free in the magazine, but I have not seen evidence of any kind to confirm this. If any of the readers out there know please inform us here at FAB FRIDAY.
Well, dear readers, you have the information needed to make an informed decision.
I'm not sure where I would stand on this. Ultimately, despite cropping, I would seize the collection at the right price because the new images do look vibrant according to FAB magazine. But why oh why, in all seriousness, is it year after year we continue to have these technical problems with our favorites films or TV series? Is there a greater conspiracy at work? I'm not much of a conspiracy theorist but you do have to wonder. Nevertheless, purchase or not, my original DVD collection would stay put right here on my own imaginary Tracy Island. It's not leaving that island. If I was sent to a desert island, the Thunderbirds series on DVD would have to be there. It is essential. Mind you, I'm not really on Tracy Island. Still, it is warm, it is FAB FRIDAY, and with a cocktail in hand, a man can dream by that pool.
Posted by SFF at 9:00 AM

Yeah, it's a crapshoot sometimes when it comes to vintage series getting released to the new media. But, at least we some coming out. I'm still waiting for THE GREEN HORNET to come out in some shape or form ;-). Fine post, SFF. Thanks.

I couldn't agree more and I mentioned in the post, I would support it with a purchase, warts and all.

I agree. Beggars can't be choosers as they say and any release is better than none at all in most cases.

Cheers. Have a good weekend L13.