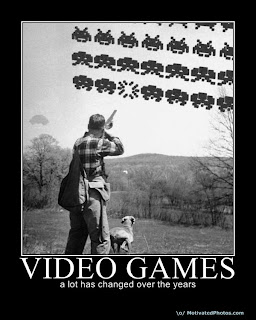 Did you not just love Space Invaders?

Speaking of invaders from space, any thoughts out there on TNT's Falling Skies? I viewed the first hour. It certainly didn't feel terribly original. Still, there was a Battle: LA component complete with Jericho-styled character development. That always hints of potential. Some of the effects were solid for television. The creators certainly didn't leave much room for mystery, showing a good deal of alien information out of the gate including creature effects that reminded me of Ray Harryhausen, and that's a positive.

The effects may not have been as impressive as those on V, but they were grittier and less sterile. The set up is war on Earth. Over at The Walking Dead they're battling zombies and in Falling Skies aliens. These groups really should combine forces.

The floor is open for your thoughts, opinions, expectations and predictions on Falling Skies.
Posted by SFF at 10:04 PM

I love this! Space Invaders was my gateway into the world of video games a long time ago, in a decade far, far away. I still love playing it, and eagerly await the day my son can play with me. Kathryn isn't letting him play video games for a few more years.

I DVR'd Falling Skies, but have not had the opportunity to watch the pilot yet, so I'm interested in your comments, and the comments of the readership here. I'm looking forward to the show...

I quite enjoyed FALLING SKIES. Your comparison of BATTLE: LA meets JERICHO is apt. I think that Noah Wyle and Will Patton help anchor this show considerably as they bring just the right amount of gravitas. I also like the gritty, WALKING DEAD-esque production values. I'm certainly curious to follow this series.

John- I'm a complete fan of Space Invaders. What a classic! Those critters coming down from space to munch our buildings and that nasty passing UFO.

My other favorites would have to be Missile Command and Asteroids and Lunar Lander. I love those!

Like you, I'm really looking forward to people's opinions out there...

Right there with you J.D. I quite enjoyed it. I got sidetracked and did not see the whole think, but I thought it was entertaining. I love that cast too!

I'm quite interested in where the series goes. Fingers crossed this is a good one that goes some distance.

Thank you both as always
sff

Having seen only the first two hour pilot episode, it is hard to judge Falling Skies as a whole. However, my first impressions are that they are going to use it to tell stories about how various types of people react to the aliens in many varied ways. Thus far, the point-of-view character, Tom Mason, is more educated than most heroes; yet is stuck with the cliché of being a widower looking after his sons alone. Hopefully, Ann Glass, a pediatrician and strong – but not male-like – female character, will become more than just friends with Tom, and become more of a permanent part of his extended family. In typical modern fiction, the most interesting character thus far is John Pope (terrible name) the former gang-leader and natural anarchist, who now appears to have been coerced into joining the militia known as the Second Massachusetts.

I’m not big on the retreat of the group in the very first episode, but from the preview of the second episode, it looks like that could be changing for the better. I like the fact that we see at least two examples of the aliens: The Walkers (two-legged robots) and Skitters (multi-limbed insect-like creatures). We’re already lead to wonder why the robots are not of a similar design as the alien skitters. Also, children are being taken as slaves by the aliens and fitted with mind-controlling bio-tech harnesses for reasons still unknown.

There is enough sci-fi tech and world building to keep me interested for now. Unfortunately or fortunately, like all television series, the success of Falling Skies will ultimately fall on how much we like and empathize with the characters on the show. So far… so good.

Enjoyed your thorough work up on the premiere.

It sounds like we are very much of the same mind on this one. CHaracter and story will be the key as always, but "so far so good" as you put it.

And you're point about the biotech is a good one. Loads of good bits in there that can lead to bigger and better story avenues. I love those spinal locks. Gross!

Thanks for sharing your insightful thoughts here.
My sincere thanks
sff