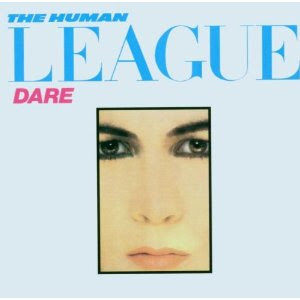 The immense power of Dare.
There are few recordings in the history of music that have influenced my own personal taste in more profound ways than Dare [1981] by The Human League. Dare is easily one of the defining electronic pop productions to affect a generation and perhaps generations to come. Today, Dare still receives regular play in my car, maybe not every song, but selections from the classic end up on innumerable mix discs. There's no denying the power of that effort.

Sure, The Human League arrived as a different ensemble with serious, tonally dark works like Reproduction [1979] and Travelogue [1980], but it was Dare that changed the landscape of the 80s music scene with its shimmering electrical homage to the likes of Abba. Martyn Ware and Ian Craig Marsh departed and went on to form Heaven 17 and British Electric Foundation, while Susan Sulley and Joanne Catherall slipped in to work with overall mastermind/ vocalist/ genius Phil Oakey. It was that Oakey, Sulley and Catherall combination that ruled and still rules my music collection to this very day.
With producer Martin Rushent on board, the newly constituted Human League ruled the world for a period. Dare shed the dark style of the Ware and Marsh years to unabashedly embrace pop in a big way. Dare gave us some unforgettable magic with Open Your Heart, The Sound Of The Crowd, the wonderful Love Action (I Believe In Love) and the automatically memorable Don't You Want Me? with that instantly identifiable music video that remains part of the iconic pop culture. Eye make-up never looked so good on men or women. The song was one of the most successful in UK singles chart history. 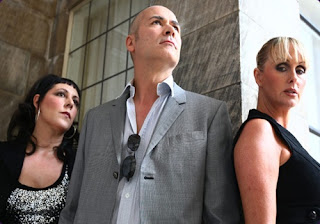 In keeping with the theme, spaceman Phil Oakey provided lead vocals on the All Seeing I's First Man In Space.
Rushent would also produce the follow-up remix effort Love And Dancing [1982] revolutionizing the 12" and remix concept. Hard Times, a brilliant instrumental, would set a standard for The Human League that would inspire numbers for years like The Bus To Crookes from the Octopus [1995] recordings.
While cerainly not a prolific band, enough can't be said about their remaining output. There are imperfections, but each outing has resulted in some masterful moments of programming perfection. Octopus and Secrets [2001] remain two of my [relatively] recent favorites. The recent Credo [2011; unavailable in the US] has its moments too particularly Never Let Me Go and Into The Night.
I couldn't let the opportunity pass without paying a short tribute to Martin Rushent who passed away on June 4, 2011. He once received the Best Producer Award in 1981 for his work on Dare. He was part of The Human League magic that set the pop world a flutter for years aiding the genius of Phil Oakey and company with a definitive moment in time. 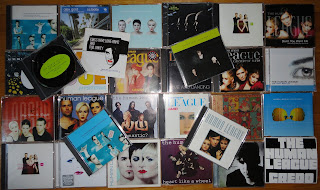 Click on photo for a closer look at Musings Of A Pop Music Fanatic's Phil Oakey and The Human League collection.
Dare has been called "epochal" and "synapse-sparkling" by Mojo. Paul Morley, of NME [New Music Express], said in 1981, Dare "challenges the very conventions of pop music and the essence of innovation." NME listed the recording as one of the best recordings ever out of a list of 100 recordings. Q Magazine listed Dare in the top twenty of the best recordings of the 1980s and called it "Zeitgeist on a stick." Sounds said Dare helped create or re-create "a whole new genre." David Fricke of Rolling Stone said, "Producer Martin Rushent’s warm wide-screen production also takes the edge off the severe chill." Yes, Rushent and The Human League landed a major pop moment. As always, there were detractors like this from The New York Times calling Dare "a terribly bland record, with candy-cane synthesizer textures, elementary melodic counterpoint, and lyrics little better than greeting card doggere." I never did like The New York Times, a publication that certainly knows a thing or two about doggere. If anything, Dare, with its use of technology and synthesizers often employed by today's artists, still sounds as refreshing and original as it did in 1981. With Rushent's guiding hand, a timeless gem was born along with a monster pop act.
The Human League Discography: Reproduction [1979]/ Travelogue [1980]/ Dare [1981] */ Love And Dancing [1982]/ Fascination! [1983]/ Hysteria [1984]/ Crash [1986]/ Romantic? [1990]/ Octopus [1995] */ Greatest Hits [1995] */ Secrets [2001] */ The Very Best Of [2003] */ Credo [2011]. *essential
Posted by SFF at 8:49 AM

Labels: 80s Music Plus, Remembered The

Thanks L13. Phil Oakey has done some very nifty guest spots out there too with Pet Shop Boys, Alex Gold and Little Boots.

I'm a big fan of this album, and it was nice to revisit it. So many good tracks on this one, low key ("I am the Law") and catchy ("The Things that Dreams are Made of") alike. Nice writeup, SFF!