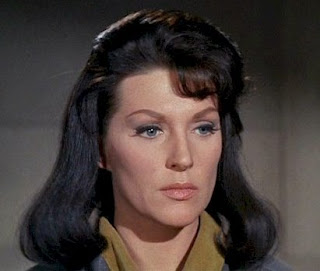 As one of the many Star Trek fans out there I would be terribly remiss if I did not pay respects, in my own small way, to the passing of the lovely Majel Barrett Roddenberry. I turned to my computer this evening to be surprised and saddened by the news. She gave so much to the Star Trek universe. She was the only member of Star Trek: The Original Series to appear in every incarnation to follow, films included. She will even be heard as the Computer, once again, in the Star Trek motion picture reboot by J.J. Abrams. She was one of those people involved in the Star Trek universe you knew you were just happy to have out there.
Her roles on Star Trek included: Number One [Star Trek pilot The Cage], Nurse Christine Chapel [Star Trek: The Original Series] and the Enterprise Computer. She even played on Leave It To Beaver folks among a host of other TV series. 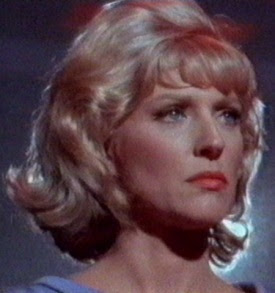 Her husband, Star Trek creator Gene Roddenberry, died in 1991 and since then Majel has been a kind of spiritual lifeforce or torchbearer for our favorite cultural phenomenon that is Star Trek. She was the living connection to Gene and everything that was and is Star Trek. It is a significant loss to science fiction fans. Her loss, along with James Doohan and DeForest Kelly, gives original Star Trek fans pause yet again. These people along with those that still survive since the end of that Original Series continue to fill a certain comfort to sci fi fans in a special way. Certainly, fans, like us, definitely continue to give life to the franchise, which continued to inspire the likes of the Roddenberrys, but they too have given us much inspiration. It is such a strange, but logical relationship. I'm getting all cheesy here. 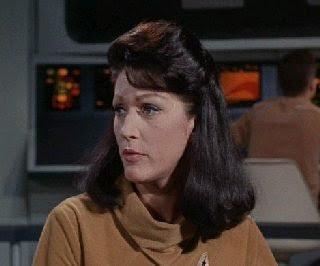 Majel Barrett Roddenberry passed away from Leukemia Thursday, December 18, 2008 at 76. I didn't know Majel struggled with Leukemia. I have an aunt who is battling acute Leukemia and she is just an amazing fighter with such profound strength. Like Majel, she too is an inspiration to so many of us in my family. I find it hard to get up in the morning and these folks just simply astonish.
In memory of her, here is a scene starring the First Lady of Star Trek, Majel Barrett Roddenberry, as she was often referred, lending her support to Babylon 5, Season Three, Episode 9, Point Of No Return, as seer Lady Morella. The part was specifically written for her by J. Michael Straczynski who apparently appreciated her support for the show. You see Babylon 5 fans and Star Trek fans can live in harmony and Majel proved that. This was a pivotal moment in the series or at the very least offered bits of information critical to the thinking and of its players. Majel plays here opposite Londo Mollari and Vir Cotto.

*
Peter Jurasik, who played Londo, said it best in the Babylon 5 book Point Of No Return by Jane Killick. "I can honestly say that she carried around a great burden being a Roddenberry in life." He continued, "When she enters a group of science fiction fans or comes onto our set- a science fiction community- the waters just part for her and people just kind of stand back." You see folks, that's the kind of admiration and love for the woman and what she gave to the franchise that I'm talking about.
*
Anyhow, my eyes bloodshot red, I just had to write something about her before my head hit the bed. We'll miss her presence.
*
Update: It was later reported on January 27, 2009, the remains of both Gene and Majel Barrett Roddenberry would be jettisoned to deep space together in memoriam.
Posted by SFF at 11:32 PM

With all due respect...

Will I receive such a lengthy tribute upon my demise?

Or am I merely just a Barbie provider?

The One to be Pittied

Perhaps. Are you working on a science fiction project that can span the ages? If so we can talk.