"There's something you should know..."
-The Expanse, Episode 1, Dulcinea-

The expansive nature of the multi- threaded The Expanse (2015) has opened my eyes to the possibilities of the next great science fiction series. I'm a latecomer to the source material. The Expanse is based on a series of books by James S. A Corey. There is indeed some comfort in knowing that. 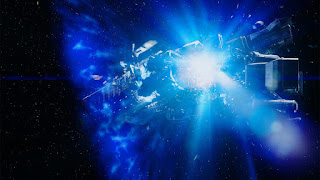 Of course it's worth noting that Corey isn't actually a single person. It's actually two people. It sound like science fiction doesn't it? Corey is the pen name of writers/collaborators Daniel Abraham and Ty Franck. James and Corey are their respective middle names. 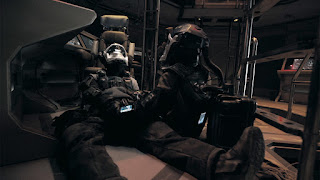 Literary source material isn't necessary or a guarantee, but more recently it has worked out well for Game Of Thrones (2011-present). Could this be the science fiction equivalent? Martin called the book series "interplanetary adventure the way it ought to be written." That's no faint praise and it's also a fairly noteworthy vote of confidence from the perspective of the written word. Of course it's always all about the writing. The Expanse has the look, feel and scripting vibe of some of the epic best based on my two episode introduction of Episode 1, Dulcinea and Episode 2, The Big Empty. And The Expanse, as its title would denote, is indeed big but there's nothing empty-headed about it. It's indeed the next best refreshingly different take on a space yarn since Stargate Universe (SGU) (2009-2011), Battlestar Galactica (2003-2009) and Firefly (2002). 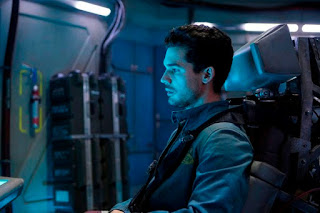 The Expanse is set amidst the stars two hundred years into the future when man has colonized the solar system and space is humanity's playground. The series has been adapted and developed by Mark Fergus and Hawk Ostby (both writers on Alfonso Cuaron's 2006 Children Of Men).

There is an ambitiousness to the series from its epic effects to its ship designs and production work to a meticulous cast of disparate, interesting characters. When you have writing, casting, production and composing this strong there is much for which to be optimistic.

I don't have a handle on the many characters yet but The Expanse is juggling, expanding and executing effectively throughout the vastness of its world building. Though next to Thomas Jane (The Mist, The Punisher, Hung), Iranian-born actress Shohreh Aghdashloo (House Of Sand And Fog, Iranium) is a refreshing and complex character addition painted upon this vast canvas. Paulo Costanzo (Splinter) and an equally diverse ensemble of relative unknowns genuinely have chemistry. Fleshing these many human variables out will be a challenge but an intriguing one. 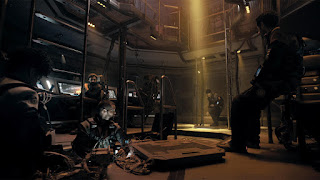 Dulcinea was a superb teaser and The Big Empty quickly built upon the pilot and pushed out more details and bit of information to open the mind or expand our worlds to its space opera. What British director Terry McDonough (Eleventh Hour, Breaking Bad) gets right in directing these first two entries is the mood, the atmosphere, the use of sound and the tension. The epic scoring on the series, too, by underrated Clinton Shorter (District 9, The Colony), is exquisite amplifying all of the aforementioned components of the work. I need to learn much more about this series, the composer's music selections and if and when a proper soundtrack might be issued? One can hope against hope. 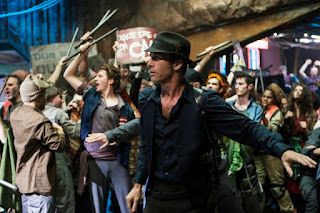 The space portions of the series thus far are affecting and contain the cinematic beauty that was infused into SGU with such an expert touch. This is indeed stellar stuff for television. Space exploration hasn't been this thrilling since SGU. There is equal parts mystery noir crime thriller and political intrigue set against a massive universe bouncing between Earth, Mars and the Belt.

Thomas Jane is always a big draw for this writer, but as it turns out there is plenty more operating within its universe along with a host of other skilled performers on the series. The Expanse offers plenty more reasons to watch. I'm actually very encouraged that this series may find an ever expanding audience, but still not likely a mainstream one. These more cerebral science fiction affairs tend to demand just a bit too much I'm afraid. At the very least it will be guaranteed two seasons more time is required. The Expanse is big, bold epic sci-fi. 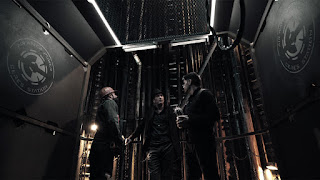 But hopefully it finds an audience. This is just spectacular science fiction with little Blade Runner-esque ambiguities and visual touches that make you want to go back and watch each frame again. I can't wait to geek out to this on Blu-Ray.

The series is clearly complicated but not in a disengaging manner unless you're one of the brain dead masses that expect to be spoon-fed story at every pass. Those viewers and those critics are out there. 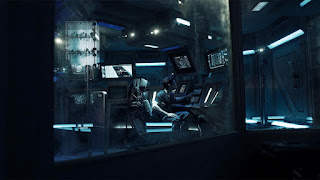 Dark Matter (2015-present), as space dramas go, has my attention and I look forward to its return, but The Expanse feels bigger, broader, more complex and more challenging. It has a kind of grand canvas complete with the kind of world-building that infused Blade Runner (1982) and Dark City (1998). And that's not take anything away from Joseph Mallozzi and Paul Mullie's Dark Matter, because I'm very much on board there. So I'm grateful for both going into 2016. Like those aforementioned films it's rare to find a quality science fiction film and with Dark Matter and The Expanse we may have two in our midst. Stay tuned. 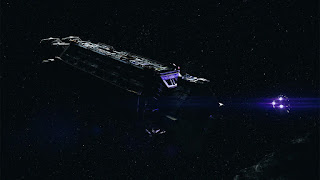 This optimistic writer is hopeful The Expanse can grab the audience Defiance (2013-2015)seemed to miss, but if SyFy sets expectations too high it could spell trouble. The demographical expanse of that world is always the key, but its also far less conventional today. Like warfare viewers attack television programming in a much more asymmetrical manner. Hopefully the backers keep that in mind and temper the idea that a success like Ronald D. Moore's Battlestar Galactica essentially had a built-in foundation. If it helps to hear it from Musings OF A Sci-Fi Fanatic, know that The Expanse is first rate, compelling science fiction that pushes the boundaries of the conventions to re-energize the genre with something a little new and different. 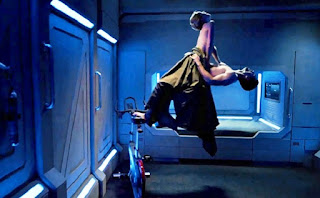 As I mentioned some critics are finding the series dense. Seriously who's the dense one here? Viewers should not expect to have all the answers in a few short episodes. Patience is required. Let's not be lazy people. Exploring the space provided and this world is part of the experience. Remember the pacing of Space:1999 (1975-1977) and many of us still discover new things about that series today. Certainly there is a lot of information, but Blade Runner provided a lot of information, much of it visual, too. I remember walking out of the theatre uncertain about what I had seen, but being over the moon by what I had experienced in that film. The Expanse had a similar effect on a much older me. 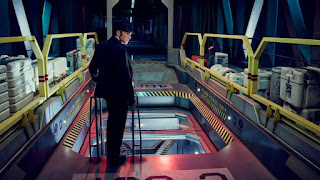 Some of these stories may collide, converge or intersect eventually. Or maybe the approach is a television equivalent of Ray Bradbury's The Illustrated Man (1951) with a variety of separate, immersive story worlds and perhaps it structurally echoes the adaptation of Martin's Game Of Thrones, which would explain Martin's own seal of approval. This approach would be welcomed and like that series I wonder if they will connect (I'm planning on reading the first book in the series, Leviathan Wakes, soon), but if not, I'm still going to enjoy this ride, discover these characters and allow science fiction to do what science fiction does best---transport this fan to new worlds, explore new ideas and concepts, reflect and mirror our lives while opening or expanding the mind to the escape.

The bottom line is The Expanse is very much my cup of tea and perhaps my favorite space-based yarn on first impressions since Stargate Universe. Truth be told, I could watch hours of a series like The Expanse and happily forego Star Wars: The Force Awakens (2015) in the process. I was even much more excited about the arrival of The Expanse over and above Star Wars: The Force Awakens. I'm probably a bit of a freak like that and that's another story entirely anyway.

(...and Thomas Jane, love the haircut and the fedora!) 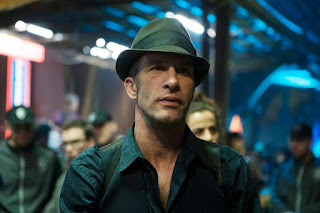 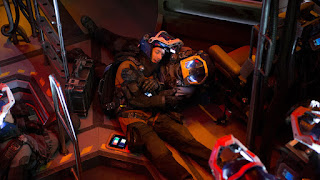 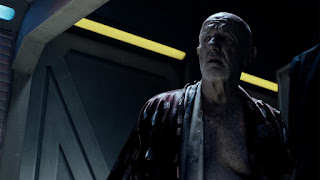 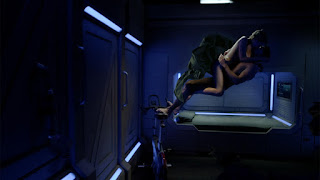 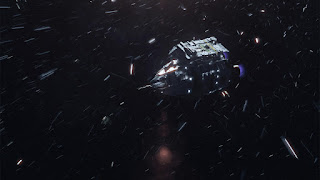 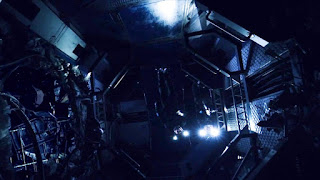 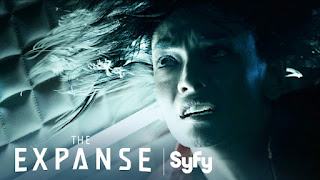 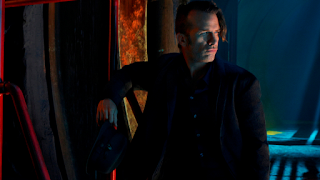 The authors of The Expanse series. 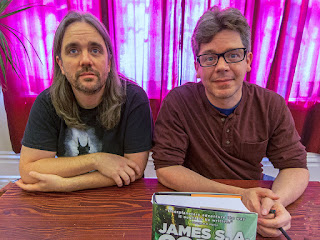 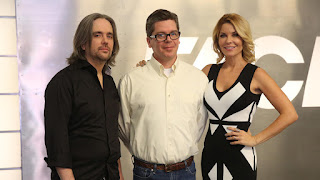 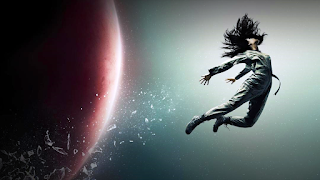 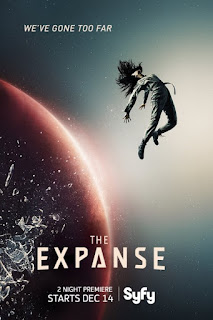 It's no Sharnado, and that's a good thing. But yeah, the Syfy channel has been a little lean lately on producing anything watchable. I'm hoping they won't muck it up, but they're off to a good start.

Ha.
I guess I still count myself among the proud fortunate ones not to have wasted, invested time in anything Sharknado related. I will never watch that stuff.

I'm awful optimistic about The Expanse. I hope people give it a chance. There is a lot of potential here.
Cheers El Vox.