Gurren Lagann Ep1: Bust Through The Heavens With Your Drill!

"Listen up Simon. Don't believe in yourself. Believe in me! Believe in the Kamina who believes in you!"
-Kamina-
That about sums up the crazy, unconventional approach to all things Gurren Lagann (2007). Funny, irreverent, bold, witty and sharp-tongued. Gurren Lagann busts through the anime heavens in a big way. Those words exemplify an inspired series forged in friendship and support. 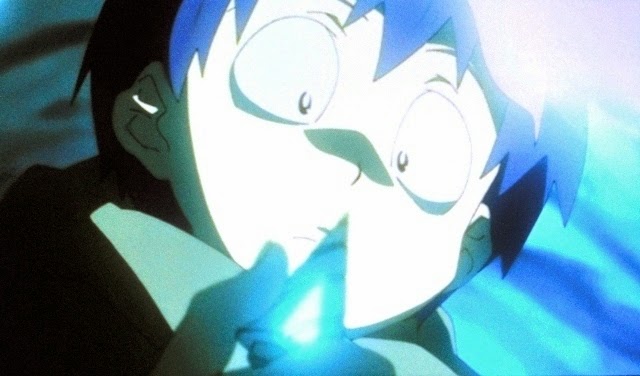 In the liner notes to Volume One (Episode 1-5), writer Kazuki Nakashima noted the snappy dialogue and tensely-fueled repartee was exactly the kind of electricity director Hiroyuki Imaishi desired for the TV series characters. He wanted to see a series where the exchanges, beyond the physical action, would be "always moving." Imaishi asked Nakashima paraphrasing, "Please don't write scenes where they're standing around, talking." Undeniably Gurren Lagann is a mecha anime that is constantly moving even if that movement is a simple, sweet exchange of character drama between principals bumping along a trail. 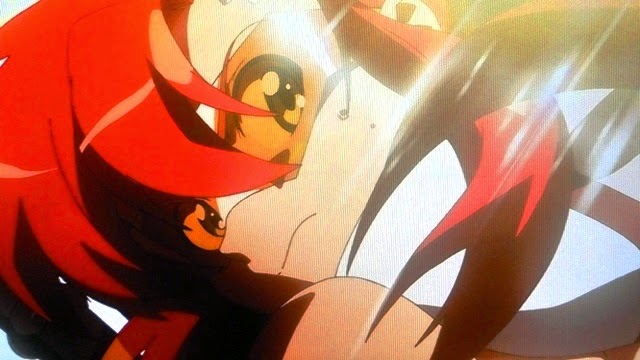 Gurren Lagann, Episode 1, Bust Through The Heavens With Your Drill, establishes the basic character setup. The story centers on a growth arc of a young boy, Simon, and another young man, Kamina, and their rise from the depths of the earth to the heavens and skies above. The story focuses not only on two male characters but a third female character and true object of desire, a real sex-kitten, in Yoko Littner.
Certainly great science fiction has a long history whereby stories center on a complex triumvirate of characters. Spock, Kirk and Bones come to mind not that it's fair or even comparable to compare to Star Trek: The Original Series. But you get the point, there is sometimes a real electricity in those dynamics. 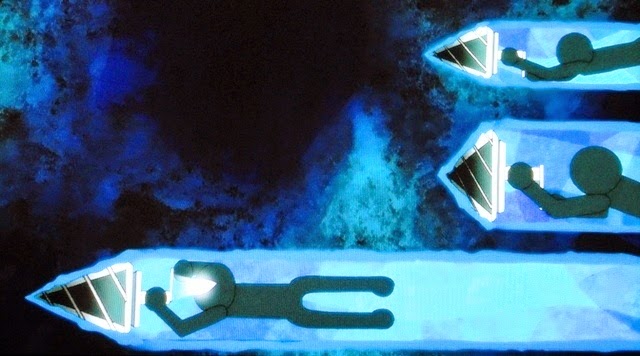 Together, the trio strike up a bond against a warring race of assorted beastmen, an enemy we know little about. The beast creatures attack using a mecha-like weapon referred to as a gunmen, all of varying shapes, sizes, colors and designs, and at specific times of the day.
Rising up from the depths of a dirt pit for an underground kingdom where men are tasked with always drilling tunnels to expand that world, Simon and Kamina rise up and strike out to make their own path in this world returning to the surface - a place originally thought crazy to be returned to. 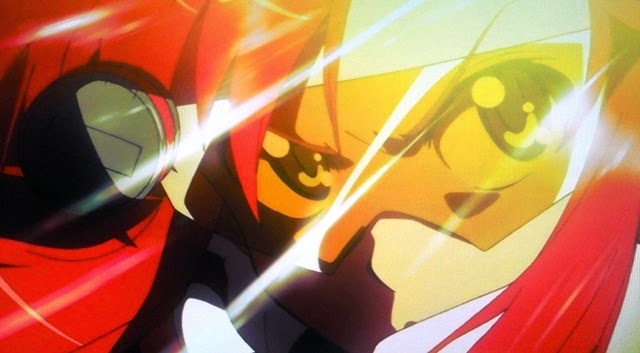 Simon and Kamina are symbols of a people rejecting what they are told to believe. They are symbols of the indomitable spirit of life and representations of those that embrace, risk for reward, and brave the unknowns to experience what it means to live.
I won't get into the minutia and excessive detail of each episode but rather offer a few simple reflections and the general flavor of what is in play with each entry coupled with the overall spirit of the series. I'll also offer you a highlight or two when so moved. 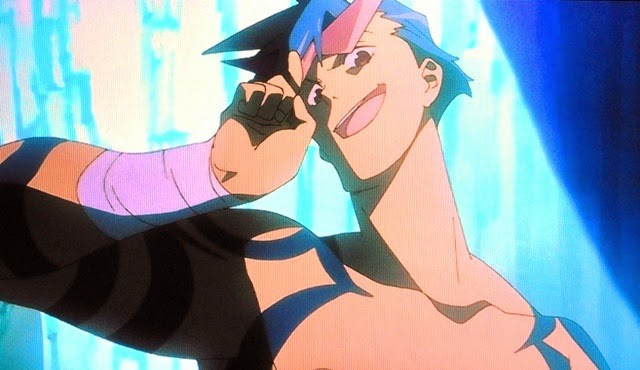 In this opening salvo for Gurren Lagann, the first of two underground stories that take place on the Volume 5 disc of the first five episodes, there is a glorious moment in the final minutes.
The final shot of Simon and Kamina reaching the surface is made all the more glorious by the digital animation of pinks and reds and the vivid beauty of a world they have never known, but discover to be more beautiful than they had ever imagined. It is also a stunning juxtaposition visually following an episode that took place almost entirely underground with more subdued colors of blue and green. When they do finally break free the color palette chosen for the moment is one of truly invigorating liberation. 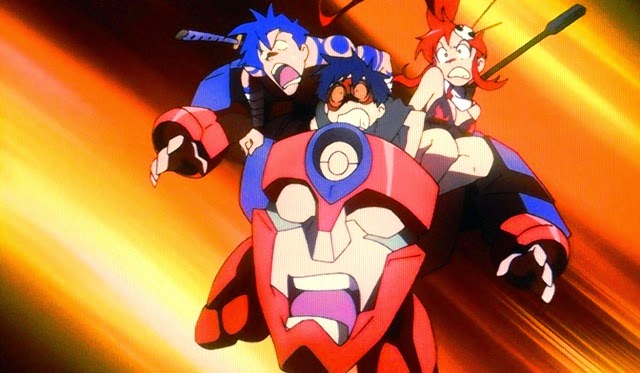 Together, Simon, Kamina and Yoko forge an unknowing friendship and bond as they strike out into the unknown boldly going forward to meet their destinies. The first episode serves to introduce us to them and presents the discovery or unearthing of the Lagann portion of the great mecha Gurren Lagann. Lagann would be the component of Gurren Lagann piloted by Simon.
Gurren Lagann is a story of what could be and what impact one man can have on this world. It's a beauty. If you can't believe in yourself, then believe in the me that believes in the you. 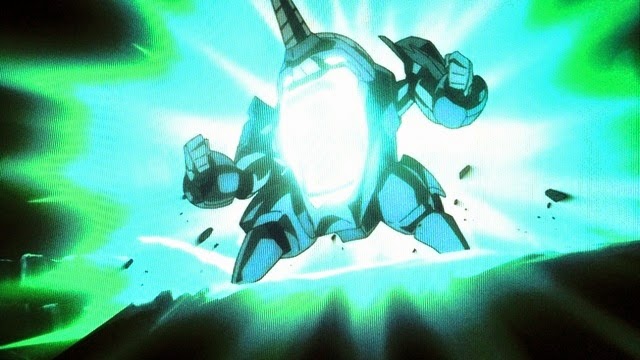 Nakashima has cited Gunbuster, also known as Aim For The Top!, as a robot anime he loved. It's no surprise. The creators here aim for the top not only with the title of their first episode, but through the creation of an anime that absolutely goes for broke and channels the kind of energy that populated an early classic like Gunbuster also by Studio Gainax. Nakashima and Imaishi clearly wants mecha fans to walk away from this experience having actually had an experience. These guys are clearly aiming big and aiming for the top. In Imaishi and Nakashima, Gainax has found two fresh new voices to relate that original vision and the energy of their earlier missions. It's a beautiful thing to see.
For another look at the primer and a solid overview of Gurren Lagann and Studio Gainax click here.
It's worth noting the images taken for Episode One were slightly screwed up during the editing process. They get better after Episode 1. My bad. Sorry.
﻿ 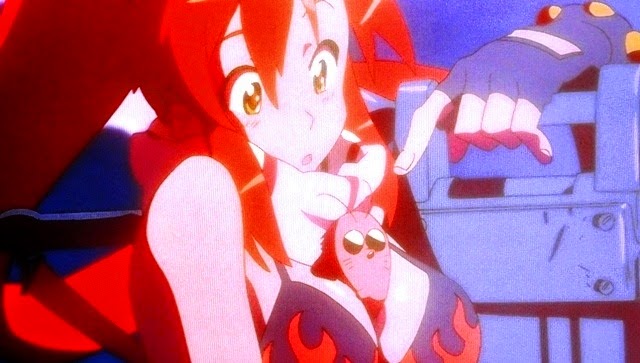 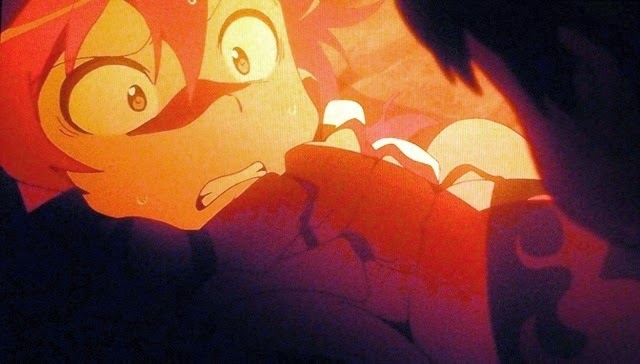 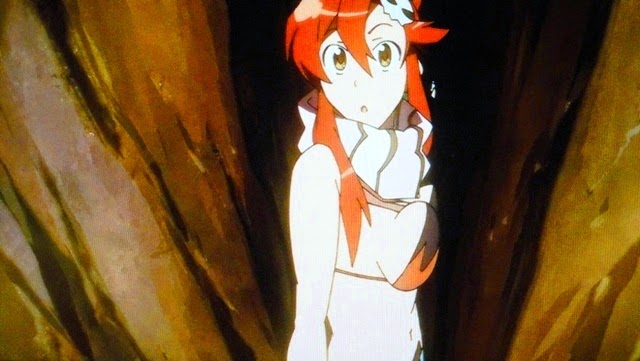 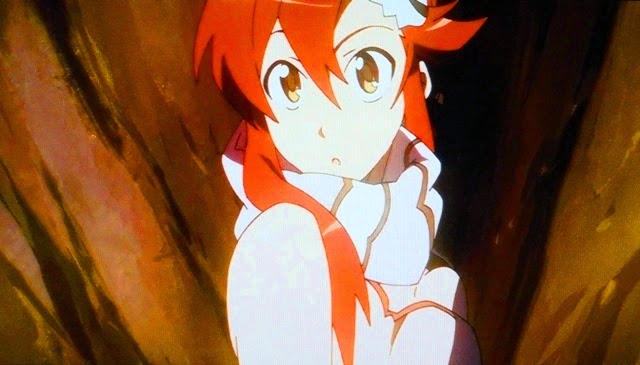 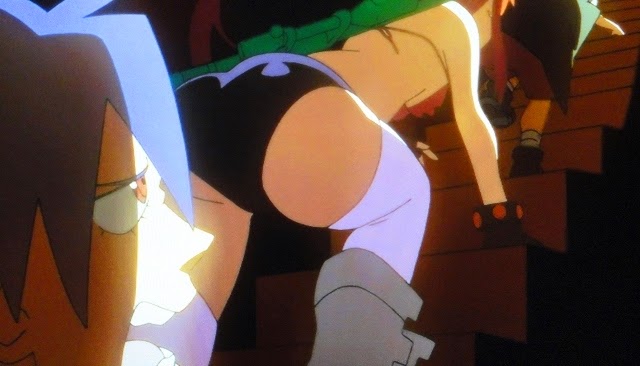 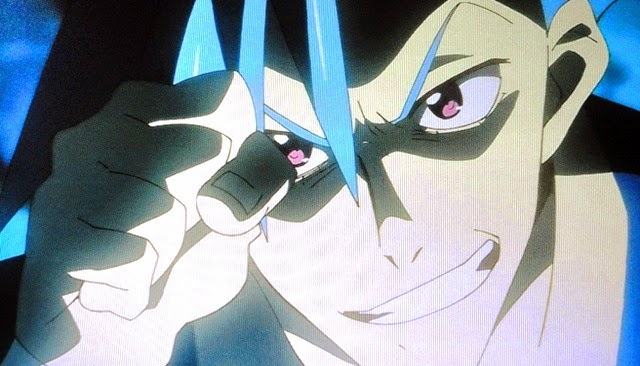 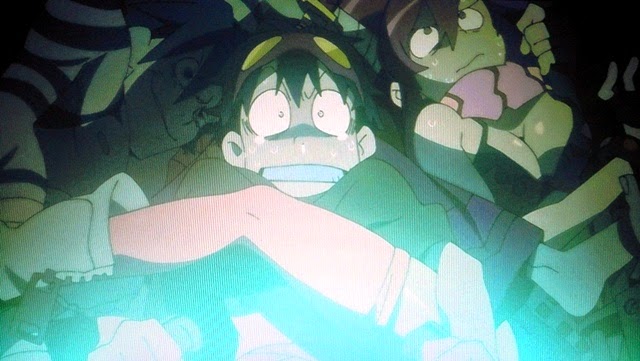 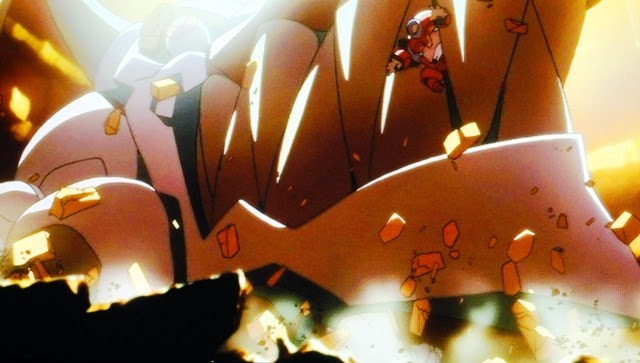 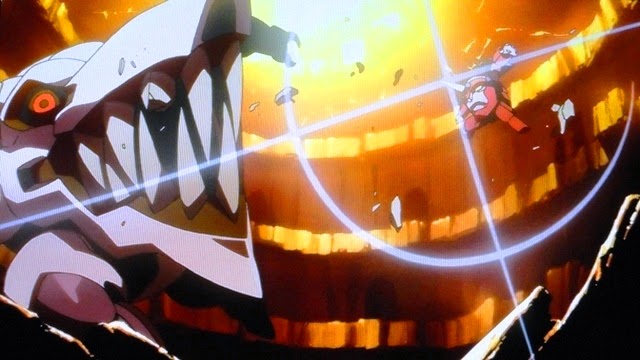 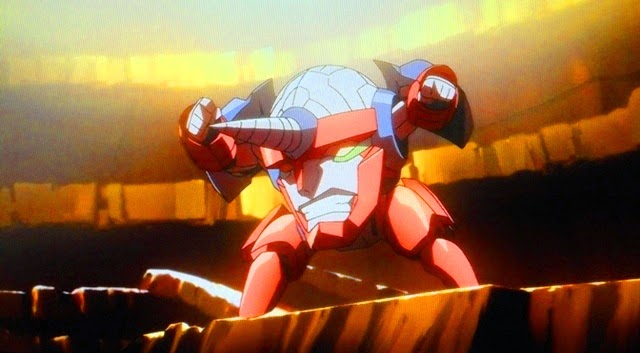 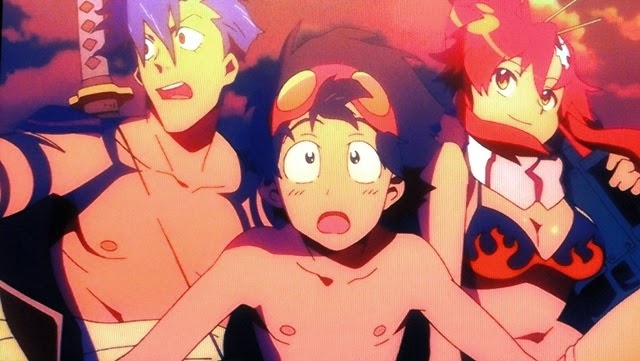 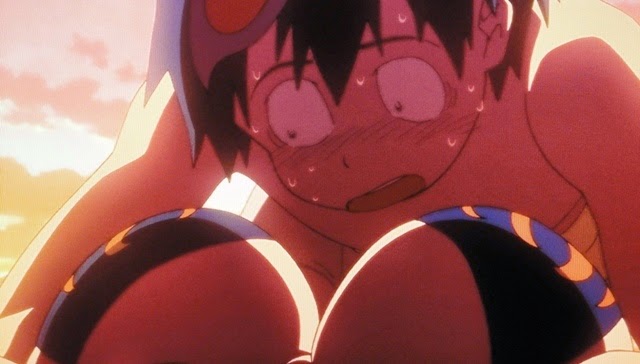 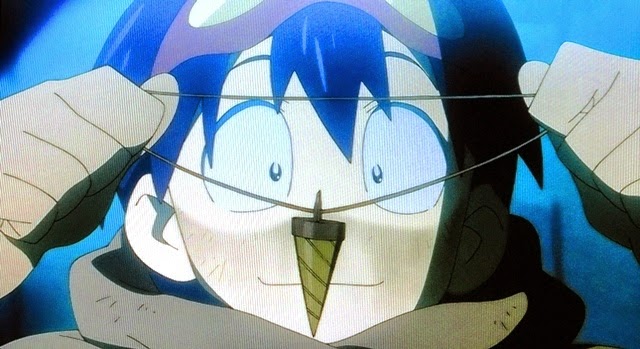 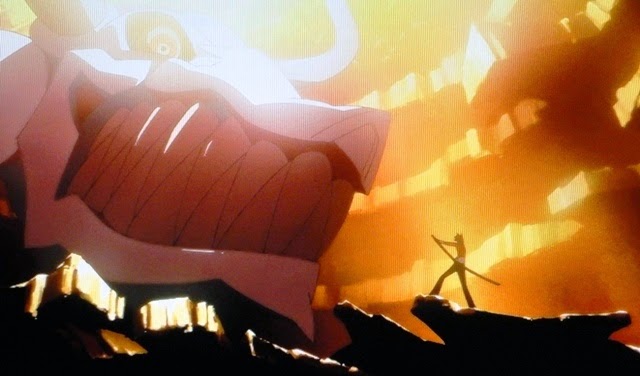 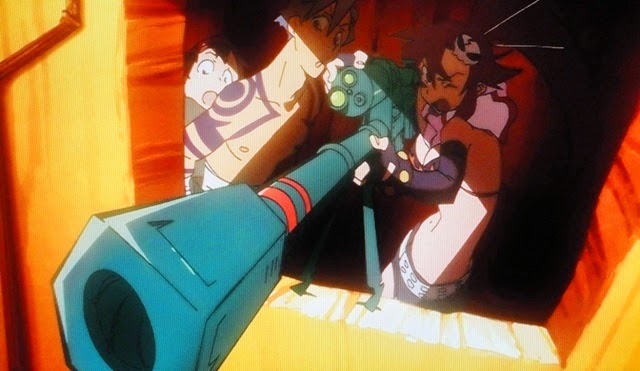 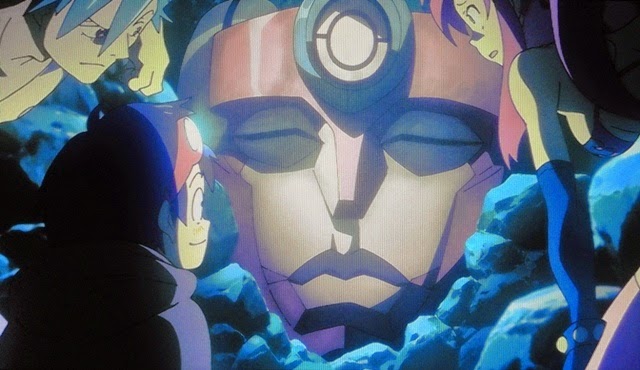 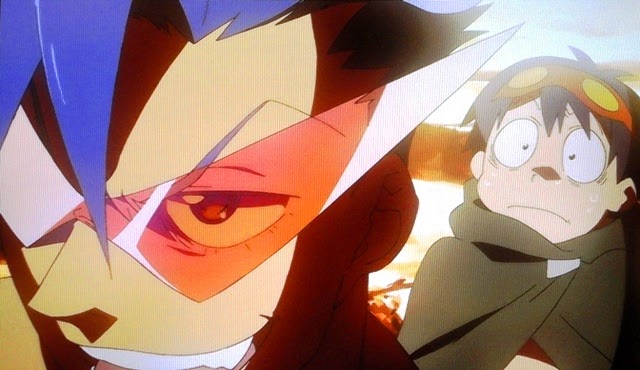 I was watching this on Toonami episodically, but it might be better to watch it off the disc to get a better feel for it. I did enjoy the underground scenes, and they went from that to a wide-ranging story. I've missed so much of the story now, I'm kind of lost. The sexy gal is pretty funny. The Japanese have a odd take on sexuality, where Americans tend to avoid it entirely.

Honestly, I prefer anything on disc over streaming or television of any kind.

It really is the very best way to watch something for me personally. The other avenues all present a host of accompanying issues.

Yes, sexuality is pretty awesome when it comes to Japanese animation and the Japanese pop culture.

I would love to go to one of their coffee shops where all the girls dress in almost fan service fashion. It wouldn't be Hooters but it would be a hoot. ;)