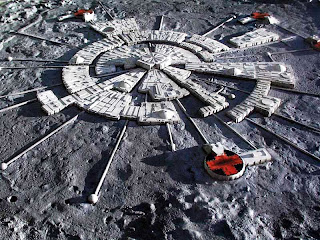 It's FAB FRIDAY Earth inhabitants and what better way to spend it than launching a space trip to the moon. Welcome to the wonderful 'verse of all things Gerry and Sylvia Anderson.

It seems fitting we should visit Moonbase Alpha with the launch of Ridley Scott's Prometheus [2012] upon us and the mythology surrounding LV-426 and the masterpiece that is Alien. Special effects supervisor Brian Johnson, born Brian Johncock [1940], had a big hand in the look of Ridley Scott's Alien [1979] coming off some magnificent working years on Gerry Anderson's Space:1999 as a director and designer of effects on that series. He worked even earlier with Derek Meddings on Thunderbirds. Johnson won an Academy Award for Visual Effects on Alien. The man who put that talent to work back in 1979 returns with his latest foray into science fiction, Prometheus, his first since Blade Runner [1982]. Well it's a new world and the promise of visual effects for Prometheus looks to be significantly different than the gritty years of Johnson's work on the classic film that inspired generations as well as his work in the dark void of space that was Space:1999. 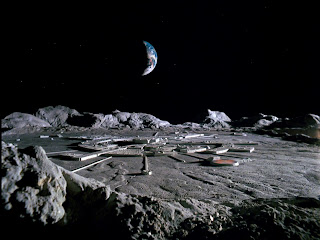 We turn our attention to those classic science fiction years and the home of the Alphans, Moonbase Alpha, and their own deep space exploration that pre-dated the fears associated with the discoveries of the crew of the fateful vessel known as Nostromo on that distant moon LV-426. Between humanity and the unknown Moonbase Alpha was home.
This is a splendid little excerpt from Author Brian Ball's Survival that captures the essence of Moonbase Alpha and its ongoing predicament amongst the stars.
"Moonbase Alpha had not been built with any coherent set of internal defenses. It was a structure designed as a way station for onwards flights to the satellites of a now far and distant sun, a center for scientific research, and as a monitor station for a steady stream of nuclear waste sent up from Earth." [See Space:1999, Episode 1, Breakaway]. "Much thought and much labor had made the base as safe as it could be made from the incessant rain of cosmic rubble."
"But Moonbase Alpha was not a fortress."
"Only when the Moon became a wandering, desolate planet in its own right, was any thought given to an encounter with hostile aliens. Now, its capabilities for warding off external enemies were under constant review." I thought this simple segment from Survival eloquently captured the essence of Moonbase Alpha. For further details, stay tuned for my ongoing Space:1999 series analysis as well as some additional information on Moonbase at the end of my Space:1999, Episode 2, Matter Of Life And Death entry.
Here's a terrific quote extracted from an interview with Martin Landau taken from Fanderson magazine FAB #46. 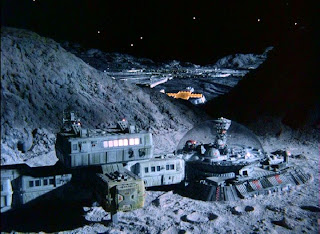 "I liked the concept of having a Moonbase and using it as a nuclear garbage dump, and I liked the idea of a group of people being thrown out of Earth orbit and into a trajectory which they had no control over, as opposed to Star Trek where they had lots of control.... The fact that we would be at the mercy of the gods, so to speak, and that we were not equipped to go there was fascinating to me." This is a significant difference between Star Trek and Space:1999 and anyone who ever wrote about Space:1999 as a Star Trek knock off should have noted this distinction. There's no excuse for such slipshod comparisons. Landau continued, "This was 1973 and we were not that far away from 1999 at the time, so technologically and scientifically we were not really equipped to go out into deep space like that. ... So the fact that this enormous accident happened and thrust us into a situation that we were neither technologically or emotionally ready for was something that I found really fascinating." When viewers take Landau's comments into account it places into perspective the characterizations in the show that were established throughout Year One. These were denizens boldly going, but genuinely frightened as a result of being ill-prepared. Landau concluded, "We had a group of 300 or so people of all nations and although we were able to sustain that amount of life with hydroponics and so on, we were not really able to procreate beyond that, because we just couldn't sustain that evolutionary aspect." So Moonbase Apha was at once a life-giving force, a home and ironically a tomb of sorts. 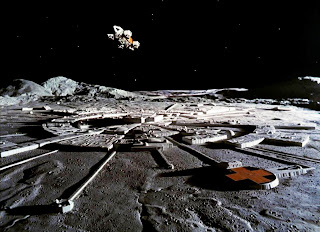 The design of Moonbase Alpha really never gets its due when you consider how it evolved from the much simpler Moonbase of the UFO series. The expanded base is iconic in appearance and immediately recognizable to fans of science fiction.
One evening, my son and I looked at the moon in the night sky and wondered what would happen if the Moon left our orbit hurtling unhindered through space. He asked, "What would happen to our tides? Doesn't the Moon affect them?" Hmmm, these are good questions Boy Wonder. First, let us establish a Moonbase and a nuclear waste dumping facility up there. And perhaps we'll wipe out the native xenomorphs in hiding before we get too overly concerned. So, while it's here, why exactly does the possibility of a Space:1999-styled Moonbase Alpha on the moon seem so daunting in 2012?
Posted by SFF at 12:00 PM

I believe a moonbase is a worthwhile goal, and as much as people made fun of Newt Gingrich, I really appreciate that he tried, again, to make our politics grand, and look to space. I was really sad to see him made a laughing stock for those particular comments, because the construction of a safe, functional moonbase could actually be an economic boon, and part of a revolution in how we think about construction and technology. If our vision of human life is small, it will be small. If our vision of human life is big, well, then, we might not meet that vision, but we might get close. Someone has to set the bar high, on the next horizon, or we'll never move forward.

I loved this look back at Moonbase Alpha, a place that even today seems very real and "possible."

I hope to see a base like it in my lifetime.

I agree. Newt's reflections on the potential of man via the space program were bold in thinking. They may not have been new, but here was a politician sounding specific in his bold statements to the masses. It was refreshing.

I simply cannot undertstand why the idea of establishing such a reality would seem like such a pipe dream after all these years.

Though, I did read just this week that a private is planning one way tickets to Mars I believe and that was after writing this. It was an interesting article and one that definitely stirred a bit of excitement in me. Cheers John. I would love to see it happen too.

Great article. We will get to the Moon, it might be a chinese base but humanity will get a colony on the moon.

I'm not sure I should laugh. How True Edward. At the very least there would be a great deal of money from China behind it, if it's not China altogether. Interesting. SFF

I enjoyed your analysis and look forward to the ongoing plans you have to dig deeper into one of my favorite science fiction shows. Despite its flaws, it has many redeeming qualities that keep it on the top-shelf of my favorites.