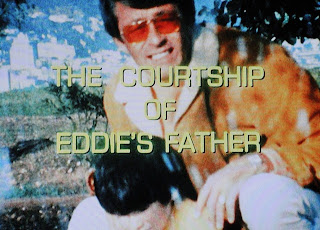 "The Courtship Of Eddie's Father was originally thought to be a very 'soft' show, the sort that no one would be interested in. Funny thing, it lasted for three years, and has never been off the air in this country since we stopped shooting. It must have been important to a lot of people, and we treated the show honestly and fairly." -Bill Bixby from a rare interview in The Hulk #10 magazine [August 1978]- 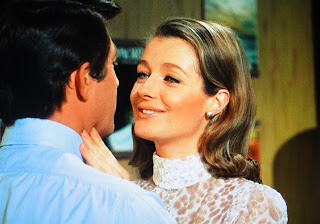 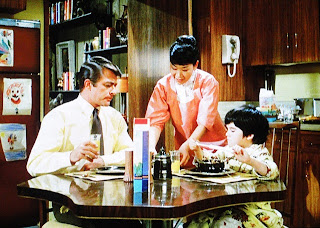 I'm not entirely certain, but The Courtship Of Eddie's Father may be my earliest introduction to loving all things Japanese whether it be Japanese culture, anime, kaiji eiga or a fondness for the beautiful women of Japan. It's quite possible my affection for that country may have started here with Mrs. Livingston when I stop and think about it. If I stop and chronologically place my influences in the 1970s, it could easily be The Courtship of Eddie's Father in syndication, Toho's kaiju eiga via Creature Double Feature, Battle Of The Planets and a deal sealer with Starblazers to name those that instantly come to mind. 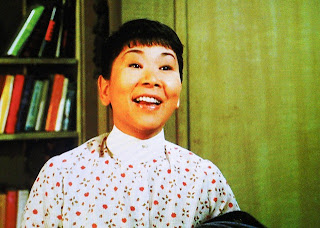 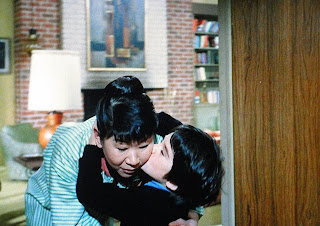 While The Courtship Of Eddie's Father was only flavored with a touch of Japanese it was Mrs. Livingston who definitely got my attention along with Bill Bixby. There was something I always loved about Mrs. Livingston's nurturing kindness and cultural reflections that put the Corbett's own situations in perspective. 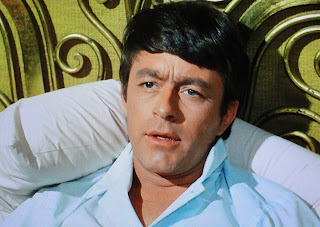 I actually knew a librarian in college named Mrs. Thomas, an equally delightful Japanese woman, as sweet as they come, who eventually retired back to Japan following the passing of her husband. I always enjoyed visiting Mrs. Thomas at the college library and sharing pleasantries with her. She knew of my love and affection for music and always greeted me at the door with the weekly edition of Billboard Magazine. When I wasn't studying or working in a computer lab, I would grab a stall and spend a good hour pouring over the latest industry talk and releases. That, and I always got to say hello to Mrs. Thomas. 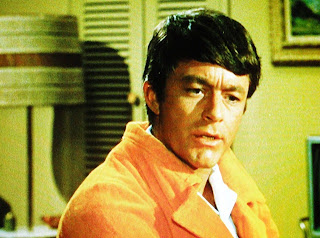 To further make the point she actually went back to Japan one summer and when we returned to school in the fall she brought me back a manga book and a pop CD by a popular Japanese artist because she thought I might like it. It was just that kind of an affection toward one another and it reminded me of The Courtship Of Eddie's Father and Eddie's relationship with Mrs. Livingston - a genuine mutual fondness. 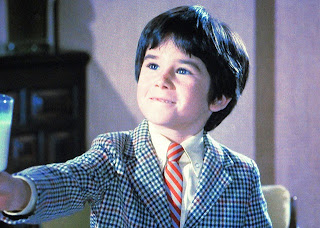 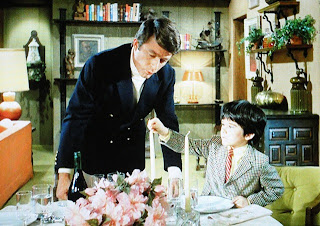 I actually wrote Mrs. Thomas after obtaining an address for her and she wrote back. She was living with her sister in Japan. That's the last I heard from her. One day, when I visit Japan, I hope to say hello again.
For now, welcome to Star Trek: The Original Series... rather, The Courtship Of Eddie's Father, Season One, Episode 3, And Eddie Makes Three. 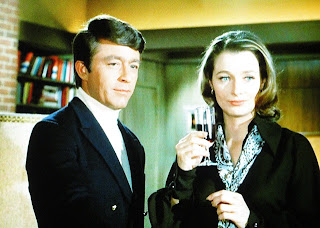 Oops! Sorry, the confusion comes from the arrival of none other than the lovely Diana Muldaur as Ms. Lynn Bardman. Muldaur, as many know, featured in a number of genre TV shows*.
As the story opens, Tom Corbett has apparently been seeing Ms. Bardman for a time. 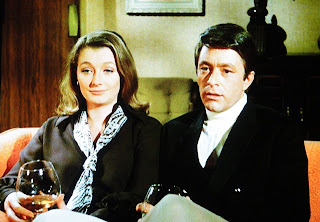 As it turns out Eddie is not a big fan of Bardman in much the same way some fans really weren't a big fan of Muldaur on ST:TNG. Eddie's dad begins serious consideration of Lynn as Eddie's potential new mom.
The bad news for Eddie is that Lynn's arrival might potentially supplant the need for the always fantastic Mrs. Livingston. Eddie begins putting two and two together and begins contemplating a world without Mrs. Livingston. A world without Mrs. Livingston is no world at all. 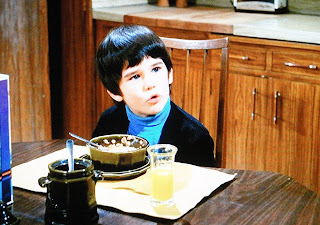 Later, Lynn is summoned in a pinch to help Tom. Eddie is sick. Mrs. Livingston is also sick and can't make it over as a result of the "American flu." Lynn agrees to help Tom with Eddie so he can go to work. 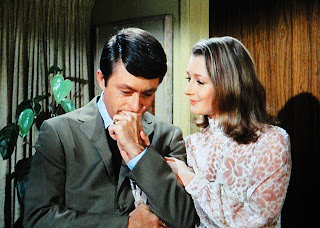 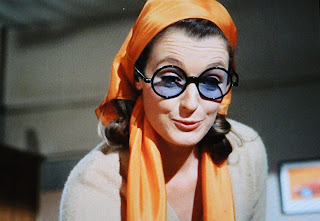 There's one amusing moment where Lynn tells Eddie to roll over so she can take his temperature with a glass thermometer. I mean I about died. Suddenly I had flashbacks to my childhood. If you were one of the unlucky ones back in the day, temperatures were taken by sticking the glass stick into your rear end. Up the shoot it went. Oh the horror of it is absolutely true, but that's how they did it. Can you imagine that glass stick breaking in your rectum? Anyway, nowadays, these things aren't nearly as primitive. But good grief the things generations had to undergo to get where we are today. The fact is, The Courtship Of Eddie's Father, as you might well imagine, like any good show of its time, is like a delightful little time capsule. 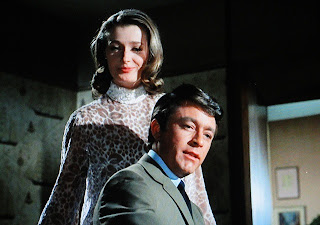 Needless to say, as kind and affectionate as Eddie is to Lynn, she is overcome by the efforts required to be a mother and breaks things off with Tom. Yes, it's back to the drawing board for Tom... and Eddie. The Courtship Of Eddie's Father continues to delight as family fare goes. At the very least, we deliver another dose of your Bill Bixby fix.
And Eddie Makes Three: B. Writer: Stan Cutler & Martin Donovan. Director: Hal Cooper. 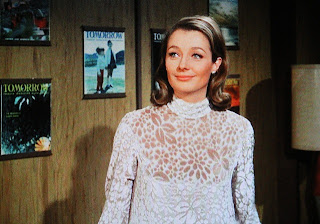 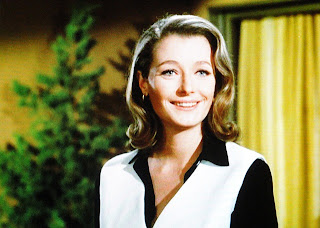 Actress footnote: Diana Muldaur [1938-present]. Muldaur is probably best known for her work within the Star Trek universe. She guest-starred on ST:TOS, Season Two, Episode 20, Return To Tomorrow [1968] and Season Three, Episode 5, Is There In Truth No Beauty? [1968]. She also featured as a regular cats member on Star Trek: The Next Generation [1988-1989] for Season Two as a not so welcome replacement, to some, for Gates McFadden as the good Doctor Katherine Pulaski of the Enterprise-D.
Muldaur also figured prominently on L.A. Law [1989-1991] for two season as Rosalind Shays. Fans of Bill Bixby's The Incredible Hulk will remember she played the part of Helen Banner in Season Three, Episode 8, Homecoming [1979] and in a different role for Season Five, Episode 4, Sanctuary [1981].
Posted by SFF at 1:30 PM

Excellent look at this show, SFF. It was very easy to fall in with this show. Nothing seemed forced in it. Plus, Diana Muldaur was always, given her looks, demeanor, and steady performances on the small screen, someone you couldn't help notice. Her work in Star Trek was only eclipse by that stellar character of Rosalind Shays -- no L.A. Law fan worth their salt will ever forget her! Another great examination, my friend.

Cheers L13. Gosh she was a real beauty! Just a gorgeous woman in her prime.

Great point about L.A. Law fans, if you liked the show even a little you wouldn't forget her work in it. Thanks pal.

Diana Muldaur has always been my favorite actress! Rosalind Shays on "L.A. Law" is the best TV character all times if you ask me.

Eva- an unforgettable TV character that further emphasized a great series, but made even better. Cheers.