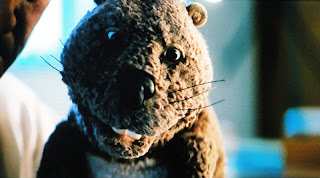 The Beaver had to be a creative risk! That Beaver – what an actor!

It's something of a small miracle that actress/ director Jodie Foster's The Beaver [2011] found an audience at all. I mean using a publicly persecuted Mel Gibson, his own worst enemy, as a man with mental illness who talks to a puppet, a beaver discovered in a dumpster no less, proved Foster's Beaver had some real balls. Sorry, I couldn't resist. 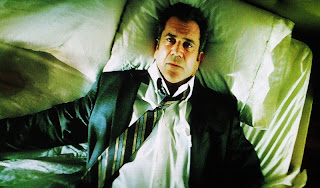 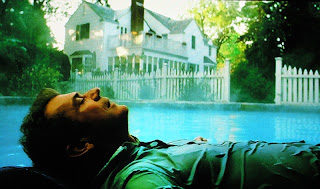 Anyway, to say that it is an odd, unexpected film may be an understatement. I mean, gee Wally, this is a long way from the family friendly fare of Leave It To Beaver [1957-1963]. A sitcom it is not. An Animal Planet documentary might come to mind too. One might even expect an inside look at the small mammal on the big screen a la an IMAX theatre production in surround sound. Truth be told there actually was such a documentary film, Beavers, but the date of release escapes me. Did you know the little mammal is second only to humans in influencing, impacting or transforming the environment around them? Yes, it's a fascinating creature, but enough trivia for now. The Beaver is quite simply the most unusual little film and when I had heard the pitch for it long before its arrival, my immediate reaction was, 'Well, now, how the hell is that going to work? That's just too damn weird.' 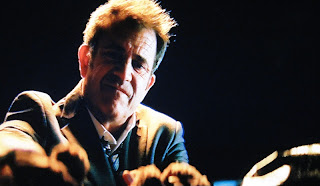 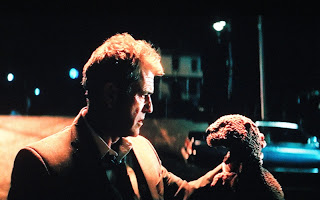 [Spoiler] It's ironic then, that in Foster's film the puppet beaver assists in transforming a lifeless man, Walter Black. The beaver, a puppet with surprising character thanks to Gibson, aids in pulling Black back from the brink of suicide to something equating a thinking, feeling, emotional being again. [End of Spoiler].
After watching the equally transformative series Breaking Bad and the devastating life of Walter White [played with stunning believability by Bryan Cranston] and his own familial troubles I'm beginning to wonder about the Walters despite really liking that name and recognizing the exceptions of such sound family foundations like the one for Wally Cleaver. Funny enough, things in this world are clearly not black and white for these men anymore. 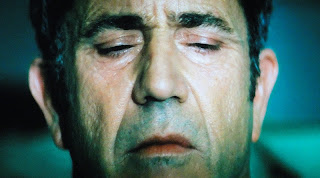 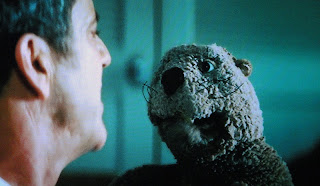 In its short 90 minutes, Mel Gibson gets lost inside the mind of Walter Black, a character suffering from mental illness that projects a part of his missing personality upon a beaver hand puppet complete with a foreign accent. The character, not surprisingly, effortlessly taps into the very real and manic troubles of actor Mel Gibson. That's not to suggest Mel suffers from mental illness, but he's certainly exhibited moments of clear mental instability earning him the nick name Mad Mel. 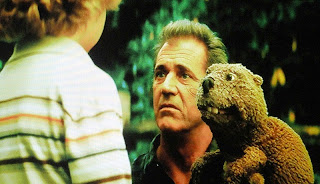 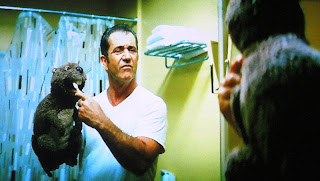 I'm certainly not here to defend Mel Gibson. The man is a fighter and doesn't need my help. Its not for me to judge the man, however inappropriate some of his behavior has been over the last many years, but as an actor Mel Gibson, for me, never hits a false note. He is an absorbing on screen presence that continues to blow me away. From Mad Max [1979] and The Year Of Living Dangerously [1982] on through to his own films Braveheart [1995] and Apocalypto [2006] and everything in between, he always brings something to the screen to make each picture special and something of an event. The Beaver follows hot off the heels of director Martin Campbell's explosive Edge Of Darkness [2010] highlighting another charged Gibson tour in front of the camera. 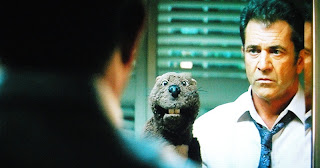 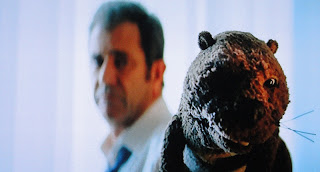 Oddly, The Beaver seems perfectly timed in the life of Mel Gibson. So many critics quickly discard artists based on their public behavior a la Russell Crowe. You name them, Hollywood stars and directors are hardly the poster children of good behavior. Roman Polanski may be one of the few to remain adored by his peers to this day. For example, I'm not here to advocate for the personal lives of gay musicians, but when you record great music you need to sing some praise. I'll take the latest Erasure CD/ download any day thank you very much. What these artists do with their lives outside of the studio or off camera is of little relevance to my meager existence. It's the instinctive appeal of their art to me. 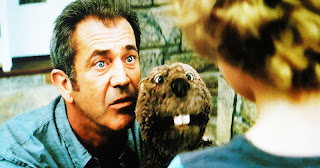 I eased into The Beaver [there I go again], after months of anticipation for it, with some degree of caution. My initial reaction to the first thirty minutes was disappointment. It felt strange. It felt unusual. It was like nothing I've seen on film of late. But something began to settle in about Gibson's performance as he became one with that hand puppet for The Beaver. It gave new meaning to "talk to the hand." Let's face it, Mel Gibson is all about risks and that part is not surprising, but he never phones in the work. He grabs the psychology of the character and makes it work. What began as odd and just a little startling began to feel–normal. Walter began to come to life through the beaver. Slowly, you began to sense and feel for a man with real problems, pain and the family that suffered through his depression with him. The Beaver isn't perfect and may not have developed the subject of Walter's illness far enough or taken the character as deep as it could have, but it does generate enough of an understanding that we can identify with Walter and those around him. Certainly many cannot identify with Gibson, but if you've experienced personal pain of your own you may find The Beaver affecting and even life-affirming to a degree. For a film tackling some clearly weighty subject matter Foster directs with a relatively steady hand weaving Walter in and out of the lives that are affected by him and his alter ego, the beaver. 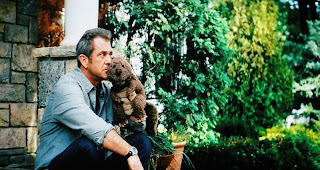 Clearly many had the same reaction, but it barely earned a tomato. Many cited the acting and direction. Some called it the best of Gibson's career. One called it "not a good movie, but a brave one." Other comments regarding the performance: "nakedly honest portrayal," "a daft premise and a damaged movie star," "a talking rodent and a fallen star," or an "on-screen train wreck," but generally opinions were split somewhere between brilliant and inauthentic. 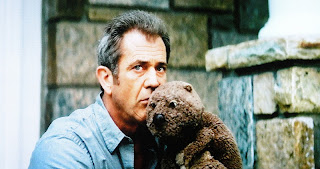 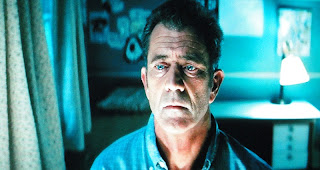 People were entirely torn. Where many were sold on Foster's handling of the subject matter others found it "unconvincing," "manufactured," Jules Brenner declared "put the puppet back into the dumpster." Some of the criticisms seemed entirely personal, a reflection of a given writer's disdain toward the actor and less about the film's merits. They would allow their personal prejudices to influence their assessments. 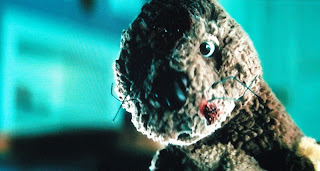 This clearly isn't sci-fi, but I wanted to offer some brief reflections on the film. If you've visited Musings Of A Sci-Fi Fanatic you may be aware of my affinity for Gibson as an actor. I am still humbled by the man's work, personal distractions aside. He is a truly mesmerizing, immersive performer and his work as Walter Black grows stronger with you upon reflection. You need to see it for yourself, more than the bulk of films the suggestion is made for. 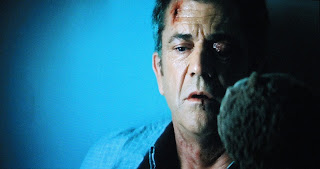 For a film with its relatively dark subject, The Beaver ends on a fairly hopeful note all events considered. Walter Black emerges with a modicum of hope and a good degree of forgiveness and acceptance by those around him. You can't help but hope for the same kind of redemption for Mel Gibson, the actor, and perhaps for our own shortcomings in this brief life. We may feel alone sometimes, but we don't have to be. Maybe that was the point of this film for Gibson personally. He embodies Walter and inhabits his world. Through Walter Gibson capably taps into a reservoir of some real pain. I can't help but hope things turn out well for Gibson too. Like the beaver, we are all social animals after all. Did you know they live in colonies? The Beaver: B [for Beaver]
Posted by SFF at 4:00 PM

Wonderful and insightful review, SFF. Even through his off-screen troubles, I remain intrigued by Mel Gibson as an actor and filmmaker. Rarely is the man boring or indifferent. I'm not defending the man's actions outside of his film roles, but I will continue to watch him onscreen. I do plan of taking in THE BEAVER this year, especially after reading your review. Many thanks for examining Jody Foster's film and for looking at this extraordinary performer.

Yeah, this is a tough film to enjoy in many respects and I think it is a rewarding film in that way. It's not an easy sell. The principals involved had their work cut out for them.

Also, once again, I second your [our] emotions on Mel Gibson. There's this guy I know and I think an awful lot of him and I mentioned Mel Gibson to him one day because I think at the time I was taking in one of his films, maybe it was this one. I can't tell you how surprised I was by his reaction. He had a very strong reaction at the mere mention of his name and simply refused to watch any of his films. "I simply cannot support the man." Well, I understand and certainly respect that point of view - I do.

TO each his own, but it does seem awful extreme. Granted, I can't say I'd want to see a film with O.J. Simpson either, but then again it's a bit like apples and oranges. Still, everything is relevant and sometimes people have very strong feelings on these things.