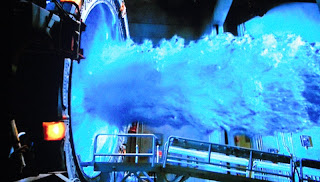 The now revamped and remastered Stargate SG-1's Children Of The Gods: Final Cut is sweetly dedicated by Brad Wright and company to the memory of Don S. Davis [1942-2008] [Twin Peaks, The X-Files]. 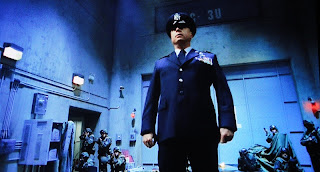 Like any good, conscientious creator, co-creator, applying due diligence and dissatisfied with the result of a past product, Brad Wright happened upon Stargate SG-1, Children Of The Gods [1997] and understandably decided to revisit it. With the distance of years, explosion of technology and his own growth as an artist/creator behind him, Wright felt things could have been done just a little differently. Sound familiar? He looked over the imperfections of his Stargate SG-1 child. Can you imagine looking at your child as imperfect? Admittedly, the unsuitable measure of children aside, I completely understand the desire to revisit a former work. It makes perfect sense to me and I wouldn't be able to resist that temptation myself. Thus, that would put me squarely in the camp of artistic license. Keeping the originals available in the age of Blu-Ray storage is always an option and recommended. 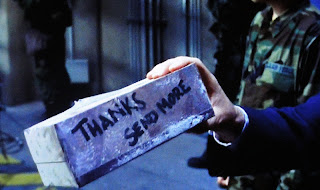 As perfect as it might seem to some, as carved in stone as it might be to purists, like director George Lucas, Wright saw its flaws and with the gift of hindsight saw an opportunity. In the same manner the Star Wars Original Trilogy received a makeover, Wright opted to perform a minor overhaul on his own baby. Going back to his original Stargate SG-1 offspring that was Children Of The Gods, to rectify areas he saw as problematic, Wright created a slight variation on the original in Children Of The Gods: Final Cut [2009]. Of course some would argue the changes are grossly dramatic and they might have cause to argue the point. 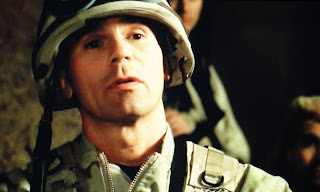 The edit, a year in the making, began in 2008 to construct the alteration dubbed Final Cut. Well, of course as always, Gateworld offers a splendid and detailed account of the rendering and is worth a look. Musings Of A Sci-Fi Fanatic decided to add a compliment piece to the previous coverage of Stargate SG-1, Season One, Episode 1, Children Of The Gods, by offering a succinct run down of the modifications that were applied for better or worse.
The original, to some, is near perfect, but despite the deletion of seven minutes of footage and the addition of some new material, Children Of The Gods does benefit to a degree. There are positives and negatives to take away from the new cut. Here's a look at what's on offer. 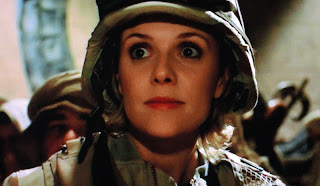 1. The accompanying score by the original composer, David Arnold with Joel Goldsmith, has been completely supplanted by the wonderful arrangements of Goldsmith in keeping with the rest of the series. The Final Cut score is exclusively the work of Goldsmith. 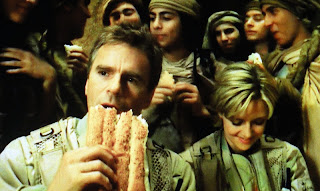 2. New material is woven throughout the film. Matte paintings, visual effects, extended scenes and one new scene. Special Effect insertions include the Stargate puddle giving it an updated deeper blue. It's a fine visual touch. Also included is a shot of Apophis palace, a sunrise over Chulak and a stunning pyramid shot. These kinds of exterior visuals truly expanded the worlds of Star Trek: The Original Series for the editions featuring remastered visual effects and the same approach works wonders here for Stargate SG-1. In fact, the early seasons of the ten-year long Stargate SG-1 series would really benefit from some minor touch-ups like those applied to this pilot episode. 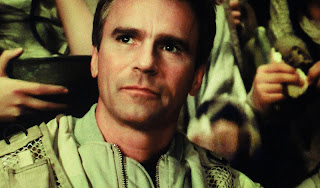 Apart from orders by Apophis to dial the gate out of Cheyenne Mountain, an added scene includes a fallen female Jaffa in the examining room next to a fallen male. Stargate SG-1, Season Seven, Episode 10, Birthright, featuring a very sexy Jolene Blalock is just one example of the female Jaffa warriors on display throughout the series. Wright redresses this omission.
An additional Goa'uld Death Glider was built into the final climactic scene, as well as a Tel'tak cargo vessel.
There's also a restored briefing room scene featuring O'Neill, Carter, Jackson and Hammond. 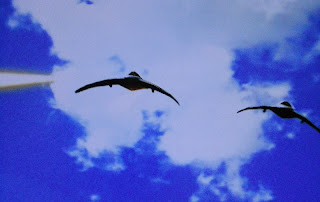 3. Moving on to edits, dialogue replacement is inserted via re-recorded material by none other than Christopher Judge, Michael Shanks and Amanda Tapping. Shanks and Tapping recut some dialogue, but Judge actually re-recorded his entire performance, which, keep in mind, is smaller in this introduction. Still, it sounds fresh and in keeping with the rhythms of the character we came to know and love. Note the following sequence and compare it to the same clip sequence included in my coverage of the original Children Of The Gods. The contrast is significant. 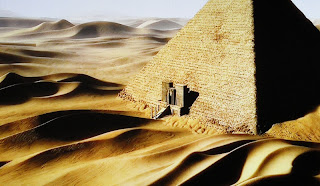 Still, the omission might send purists over the edge. Part of the affection of early episodes like this one is seeing a character find his voice, alter his/her inflections and perhaps for some grow less stilted. Revealing each actor's relative growth is part of the fun. Removing these things is tantamount to tampering with the childhood perfection of a favorite toy, like a Colorform set. You just don't do it. Personally I enjoyed what was accomplished, despite my love for the View Master, the rusty metal lunchbox and Stretch Arm Strong, but I understand why it might have its detractors. Was Richard Dean Anderson's first take perfect? Anderson actually appears on the commentary track with Brad Wright.
Speaking of Anderson, his cheeky sense of humor was removed from this cut regarding his initial meeting with General George Hammond. The quote of the meeting in Hammond's office can be seen at the top of my original coverage, but it has been cut from the Final Cut and I must admit, while it makes sense, I missed seeing it. 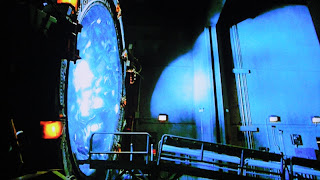 Additionally, edits of Apophis' atrocities are spliced into the Teal'c sequence when he decides to join O'Neill and company. This scene always felt a little light to me concerning motive. There was no real information to suggest Teal'c's desire to leave Apophis, but efforts are made here to correct that approach.
Season Five, Episode 2, Threshold delves into Teal'c's decision to abandon Apophis, but the Final Cut of Children Of The Gods offers visual evidence and additional dialogue early on to better explain the break from his Jaffa master. 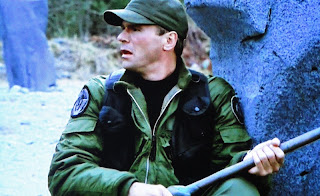 Many have complained of the motivations of Bialar Crais to pursue John Crichton in Farscape with such vehement hatred following the accidental death of Bialar's brother by Crichton. Many have suggested that moment was not enough to motivate Crais in a credible fashion. The decision for Teal'c to join SG-1 always felt a bit convenient in the start. This modification to a significant moment in the SG-1 mythology is serviceable, but still not entirely convincing.
4. Deleted material includes the infamous nude scene featuring then Vaitiare Bandera as Sha're. Her lovely breasts no longer adorn the film and that's a shame. There not needed by any stretch, but this fan really wasn't troubled by their inclusion. Most kids that would take time to watch this might cringe at the sight of her nipples, but unlike the intensely provocative scenes in Stargate Universe, this was nothing more than a couple of "mouth-watering scoops of flesh," to quote Weird Science. Sha're wasn't pinned against the wall and having sex with Apophis. Who really has a problem with sleeping breasts? Most kids aren't watching Stargate SG-1 anyway. 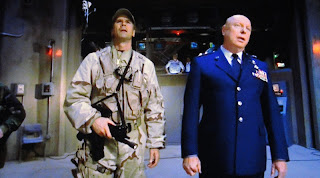 The infamous Samantha Carter introduction to the men has also been removed. Do you remember the line? "Just because my reproductive organs are on the inside instead of on the outside doesn’t mean I can’t handle anything you can." Gone. This was always out of character when compared to how Carter would develop. It has been removed for good reason. It was always Wright's preference to have it cut, while Jonathan Glassner voted initially for its inclusion. Some would argue its removal is problematic as future episodes allude to the line.
A piece of dialogue from Charles Kawalsky suggesting he didn't know O'Neill had a child lends the impression they were not close, working in stark contrast to Stargate SG-1, Season Two, Episode 4, The Gamekeeper. The line also seems out of place when compared to the handling of the O'Neill/ Kawalsky relationship in Season One, Episode Two, The Enemy Within. The line has been cut. 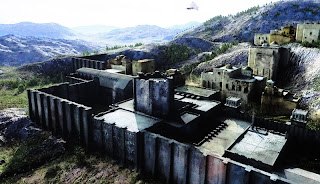 Other scene removals include the Apophis harem scene and the cliffhanger moment displaying an implanted Kawalsky complete with glowing eyes. This final removal allows Children Of The Gods to function as a self-contained film and less a serial entry. Truthfully, it's not needed to appreciate The Enemy Within on its own.
All in all, it is a well-paced revisit with strong effects and tighter character dialogue. Children Of The Gods: Final Cut feels much more the mark of Brad Wright and his intended vision with less studio interference. It's clear Glassner and Wright were both significant players in those first three seasons until Glassner relinquished his role to Wright. Wright's stamp is slightly more pronounced now. 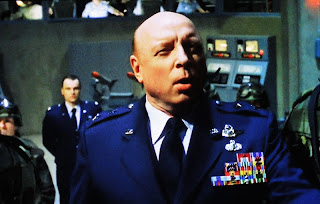 Ultimately, these recuts and transformations to original material create a whole host of arguments for and against. Debates rage endlessly on subtle changes that have profound impacts. Star Wars IV: A New Hope, in particular, is a glaring example, but in some small corner of the universe the conversation continues on Children Of The Gods. I've added my two cents because I love and respect the conversation.
In the end, Children Of The Gods: Final Cut falls more in line with the kind of lovingly rendered, detailed and restored version of Star Trek: The Original Series and less the over tinkering of the George Lucas franchise. How on Earth could Greedo shoot first?! This pilot film is given a solid, if not wholly necessary reassessment. As good as the film is, that's my final word on the debut of one of the great science fiction franchises. Children Of The Gods: Final Cut: B. Writer: Jonathan Glassner/ Brad Wright. Director: Mario Azzopardi.
Posted by SFF at 12:00 PM