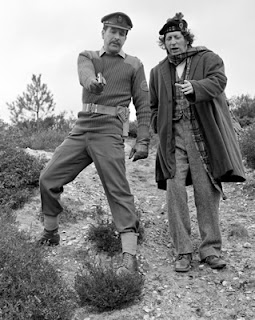 "I appear to have played my part in the creation of a modern-day icon. It's quite a thought!" -Nicholas Courtney-

Doctor Who's Elisabeth Sladen wasn't the only beloved person of the Doctor Who series to leave us in 2011, but boy is she missed. Nicholas Courtney passed a few months earlier in February and may be a more recognizable icon to those on the other side of the big pond in Great Britain. 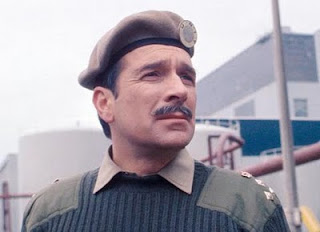 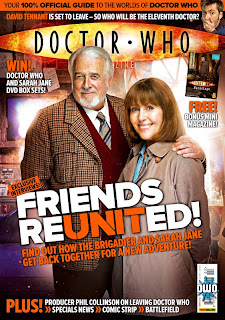 Apart from his appearance in Tom Baker's first official episode as the good Doctor in Robot, Courtney also guested opposite Tom Baker in one of my favorite '70s era Doctor Who episodes, Terror Of The Zygons. The latter with its cheesiest effects, but wonderful Zygon outfits, has still yet to appear on DVD. 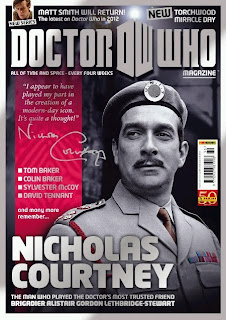 Doctor Who Magazine #436 [the biggest regular issue ever at 100 pages] offers a wonderful tribute to Courtney's career. Many actors, technicians, artists and writers reflect on the man's career. It's a splendid issue for those who remember the man's work fondly. Two segments entitled Nicholas Courtney Remembered, a David Tennant interview, a Tom Baker interview where he submits he'll be missed "terribly," and a thorough tribute to the man by Marcus Hearn dubbed The Last Post round out the salute, not to mention reflections on one of Courtney's favorite episodes called Inferno from the Pertwee years. As you might expect, apart from the feature article, The Last Post, which is like The Last Word on Courtney's life and career, the Tom Baker interview is almost worth the price of admission. He is, as always, colorful and rarely slides into discussions about himself. 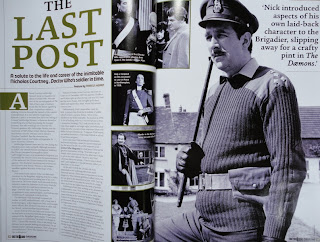 Personally, I certainly didn't have the same affection for the character that I did for Sarah Jane Smith, but Courtney's Brigadier was a classic and certainly unforgettable even for me. You can take a look at some images and a video clip featuring Courtney with Tom Baker in Baker's first appearance as Doctor Who on the series in Robot here.

Although I'm late paying tribute to the man I shouldn't feel too bad as my own entry mirrors Doctor Who Magazine's equally proper remembrance. 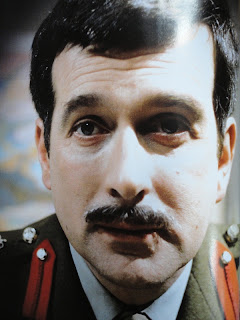 One thing is quite poignant when considering the bigger picture of Courtney's passing, the loss of Elisabeth Sladen and earlier producer Barry Letts as noted by producer Philip Hinchcliffe. "It seems we are all mourning the gradual passing of a great era of Doctor Who."

Nicholas Courtney was clearly a gentle and good man and he died following a battle with cancer at the age of 81.

Labels: Doctor Who, Remembered The

I love the Doctor, and I greatly enjoyed Nicholas Courtney's role as the Brigadier. More than anyone onscreen except for the Doctors, and the two Masters Roger Delgado and Anthony Ainley, he helped personify that era and its continuing excellent characters and casting.

He's one of a couple of people I really wanted to meet, along with Ms. Sladen, Tom Baker, and Anthony Ainley, associated with the first era of the show.

I always loved Benton [John Levene] too. For a small part he was always great.

It would have been cool to meet Sladen and Courtney, but alas that is not to be.