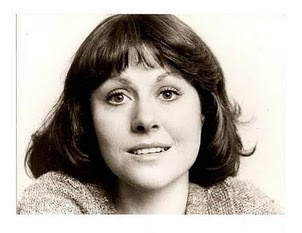 "My favorite assistant in many ways has to be Elisabeth Sladen, because she was so good to me-.... Elisabeth, she's a wonderful girl, but also she's a beautiful actress with great sensitivity.... She was marvellous." -Tom Baker [Doctor Who Magazine #179.]- 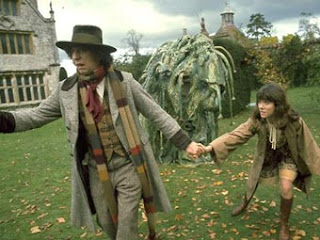 I've been reading and viewing Doctor Who: The Tom Baker Years of late for obvious reasons. The loss of Elisabeth Sladen has been strangely affecting. My adoration for her is not false. I loved Elisabeth Sladen reflected in my coverage of her in the Doctor Who reviews here and in my post regarding The Sci-Fi Fanatic 50+: Greatest TV Influences. You simply expect those you grew up adoring to always be there and when they unexpectedly expire... well, you're left pondering the fragility of life and its many gifts I suppose. 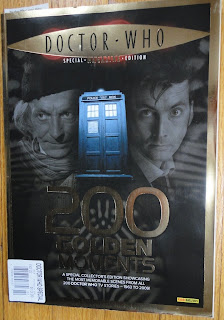 I've been thumbing through a special edition of the Doctor Who Magazine called 200 Golden Moments. The folks who manage and edit that magazine do an amazing job. It's splendid, astounding work really. The use of gorgeous archival images and the wealth of knowledge by those who love Doctor Who at that magazine is simply unmatched. Does anyone make a science fiction magazine better than the British? I'm not so sure. They can do up a royal wedding too I suppose. What their magazines sometimes lack in content is certainly more than compensated for in effort, energy and enthusiasm. The wonderful SciFiNow is a great example and over the course of the past few years that magazine has truly won my heart over in the absence of the Starlog [USA] and Starburst [UK] defunct publications of the world.

The case for the Doctor Who Magazine is actually even stronger. This publication really is the complete package. It's like a mass market release of the UK Fanderson publication FAB. It's simply chock full of brilliance. I haven't bought all of the recent Doctor Who Magazine issues, but I buy them when it tickles my fancy. If the subject matter centers on the Fourth Doctor, Tom Baker, or any of his companions like Elisabeth Sladen, maybe even David Tennant, I'm generally very interested. 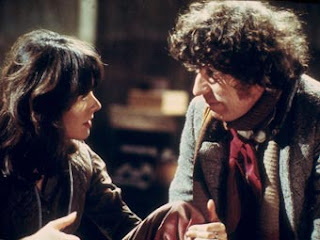 Well, I was reading over the 200 Golden Moments Special Edition. The magazine focuses on 200 moments extracted from 200 episodes of Doctor Who from the beginning to the publication date. The Ark In Space segment written by Philip MacDonald was perfect really. He captures two of my favorite moments from that adventure. First, he briefly mentions the Doctor's speech on homo sapiens, which is brilliant in its own right. Second, he discusses the Golden Moment. The scene he describes brilliantly captures one of the many Tom Baker and Elisabeth Sladen exchanges from that era. The two play the scene brilliantly. The dialogue is deliciously crafted. 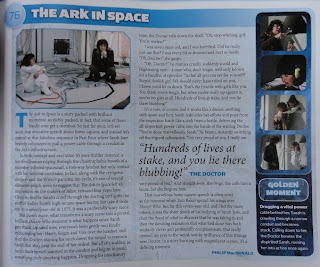 Sarah makes her efforts to crawl down a tight passageway to run a conduit for the Doctor on the Wirrn-infested space station, Nerva. It's a terrific moment because it genuinely reflects the depth of Tom Baker's character as well as the courage and fiery persistence of Sladen's Sarah Jane Smith. When Sarah Jane becomes stuck in the tunnel, the Doctor moves to stimulate Smith with some good, old-fashioned, reverse psychology.

The dispirited Sarah Jane is frustrated and jammed. The Doctor yells, "Oh, stop whining, girl. You're useless!" Smith responds "Oh, Doctor!" "Oh Doctor?" Tom Baker begins to really shine, but it's Sladen who is very important to the mechanics of that scene. "Is that all you can say for yourself? Stupid, foolish girl. We should never have relied on you. I knew you'd let us down. That's the trouble with girls like you. You think you're tough, but when you're really up against it, you've no guts at all. Hundreds of lives at stake, and you lie there blubbing!" It's simply a brilliant moment in Doctor Who history and of course the Doctor's words are anything but the truth and he knows it. Incensed, Sarah Jane Smith to the rescue and she is pushed to success. Popping out from the shaft she declares, "I can manage. I don't need your help. Thank you!" Baker is thrilled. "You've done marvellously, Sarah." He adds, "I'm very proud of you. I really am very proud of you." It marks one of those scenes that genuinely highlights why Tom Baker and Elisabeth Sladen made for one of the best Doctor/ Companion combinations in Doctor Who history. The thrilling sequence spoke volumes about Tom Baker and Elisabeth Sladen's chemistry.

You can see that significant scene in my coverage of The Ark In Space. The bottom line is, we loved Elisabeth Sladen. Just like the Doctor, we knew Sarah Jane Smith wasn't foolish. We knew she wasn't stupid. She was far from useless. She was very dependable. She was all about tough and she was all about guts. Her bravery never let us down. In the end, we will miss Elisabeth Sladen because she represented so many of these qualities that represent the best in us. She was the epitome of all the things the Doctor saw in a great companion. Sladen was as brave in her own life and her battle with cancer as she was in character. She was clearly a special, effervescent, magical, forever youthful woman of strength and character. 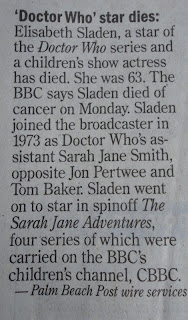 It was not lost on me that day when I saw Elisabeth Sladen's obituary that it shined next to a foolish story on the selfish world of Charlie Sheen. It merely amplified the class, the responsibility and goodness that was at the heart of Elisabeth Sladen. She carried herself with dignity and she leaves a little void out there to some of us who were fans of her work. She was class all the way. 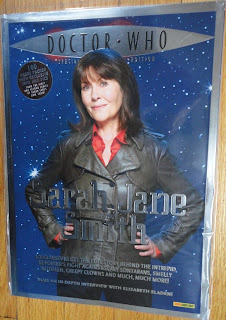 In a 2009 interview Sladen was asked by Doctor Who Magazine for a Special Edition highlighting her character, Sarah Jane Smith, if she could "imagine a final conclusion for Sarah?" It's certainly a Catch-22 for a woman who worked so hard right up until the time of her passing. To see such a conclusion come to fruition she would have had to give up the very thing she had finally made such a success, the lead for The Sarah Jane Adventures, spotlighting the very character she made a success. She worked tirelessly to bring The Sarah Jane Adventures into Series 5 completing just three episodes. Well, Sladen thought about it and responded, "I don't know what that would be. I haven't found that at the moment. Maybe it will just appear. Maybe it will rear its head with clarity. But at the moment, I just want to open the next script. I really do. I don't want to stop just yet." What telling words from the late actress. Her love for this character and her love for her series was self-evident. She placed her heart and soul into it. Interviewer John Ainsworth concluded fittingly, "We don't want you to stop either." How true those words were. 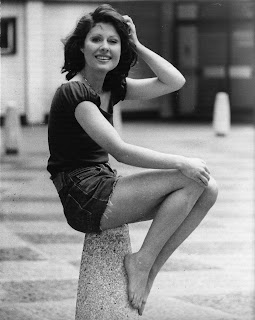 In some bittersweet way it seemed fitting Sladen never closed the book on The Sarah Jane Adventures in a tight, neat, little package. That's not what fans wanted and it's not what Sladen wanted either. The truth is fans always loved Sarah Jane, the character, and the lovely actress who played her for her vitality and zest for living and in her small way she gave that life to the character and to the fans. The fact is, without the proper closure to that series, Sarah Jane continues to live on. And maybe that's exactly how Sladen and fans of Doctor Who would want it. Yes, her spirit lives on and I'm completely good with that.
Posted by SFF at 6:57 PM

Great tribute! Such a shame, she was the first one of the doctors assistants I can remember watching as a kid, usually hiding behind the sofa!

Wonderful tribute, SFF. And you're so right about British publications -- they really do things right. Thanks for this.

A really beautiful tribute to a great actress and a great character, my friend. I'm glad you wrote it; and I had the opportunity to read it.

All my best,
jkm

Thanks all very much.

I felt compelled to do it. I'm glad you enjoyed the tribute.

JKM- Thank you John. She was a beauty who went too soon.