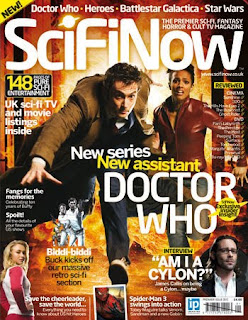 I hope to one day give a few Musings Of A Sci-Fi Fanatic treatments to some Buck Rogers In The 25th Century [1979-1981]. I loved the series growing up. Producer/ Writer Glen A. Larson gave me two of my favorites in this series and Battlestar Galactica [1978-1979].
*
The one huge difference, I was old enough to really appreciate the disco-era spandex that adhered to the amazing body of actress Erin Gray. Babes and Bots were the rule of the days and no one was better than ultra hot Colonel Wilma Deering. It was one of the first times I really wanted to see clothes peeled off an actress. Star Wars' Carrie Fisher never quite did it for me in the original and I wasn't quite ready for that. But Buck Rogers, "biddi-biddi-biddi, what's up Wilma!?" I was digging Wilma and robot Twiki [the amazing voice of the late Mel Blanc]. They were a huge part of the show for me. Gil Gerard was terrific as action hero Buck Rogers and was my answer to missing Lee Majors in Six Million Dollar Man [1974-1978]. Of course, Larson was executive producer on some Six Million Dollar Man films and of course The Fall Guy [1981-1986] starring lee Majors. So, Larson was all over my world as youngster.
* 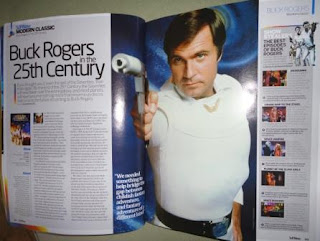 Buck Rogers was a true highlight and a true delight and no one hired babes better than the creators behind Buck Rogers, save for maybe Star Trek: The Original Series. While Buck Rogers and Battlestar Galactica may have been inspired by Star Wars no one did babes better than Larson.
*
Needless to say, I need to go back and to quote Eddie Money, "I wanna go back" and look at Buck Rogers once again. Someday.
*
Without further adieu SciFiNow Issue #1 takes a look at the series in a segment called Modern Classics. Here are the Worst and Best of Buck Rogers In The 25th Century according to SciFiNow.
*
The Worst:
1. Time Of The Hawk [Season Two]
2. Cosmic Wizkid [Season One]
3. The Satyr [Season Two]
4. Journey To Oasis [Season Two]
5. Planet Of The Amazon Women [Season One]
*
The Best:
1. Awakening [Pilot] [Season One]
2. Cruise Ship To The Stars [Season One]
3. Space Vampire [Season One]
4. Planet Of The Slave Girls [Season One]
5. Space Rockers [Season One]
*
Funny, Space Vampire was noted by SciFiNow as a tribute to "Nostradamus." This had to be a complete and utter brain fart, when I have to believe the writer clearly meant Nosferatu [1921]. It was an amusing mistake and we all make them. Author John Kenneth Muir notes Space Vampire to be one of The Five Scariest Episodes of Cult Television, 1970-1980. Clearly SciFiNow does get it right now and again. It's interesting to not Season One is truly spotlighted among the Best and has always been the best of the two seasons. Season Two serves up the biggest lemons.
* 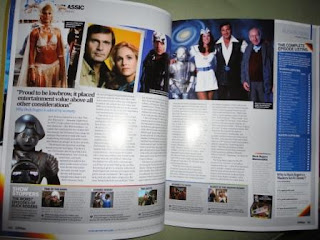 So if you're so inclined to see Gil Gerard's tightly tucked package or Erin Gray in full on sexy, while Twiki gets excited for us, Buck Rogers In The 25th Century is worth venturing into once again. Nothing too serious, but good, old-fashioned fun that's sure to bring out the boy in you.
Posted by SFF at 9:57 AM

But I don't know how well it holds up having actually watched some of these recently.

"Time of the Hawk" as the worst episode?

That's hard to reckon with on any logical level when there are episodes out there like "The Golden Man" and "Shgoratchx!"

That latter episode is almost unwatchable Whereas, at least, "Time of the Hawk" picked up an Emmy Award for cinematography...

And no love for the epic two-parter "Plot to Kill a City," which is my candidate for best episode?

At least there's agreement on the matter of "Space Vampire," an unexpected classic!

Weird list. But great fodder for discussion and debate!

Thanks for posting this,
John

As you said, great for debate or personal reflection.

I find there are many instances where I am simply scratching my head with some of their choices.

This is clearly a subjective list by someone who simply doesn't see a series in the same way as we do.

I found myself foaming over some choices they made on their Farscape list as WORST. My reaction was "WHAT!?"

Oh definitely, I enjoy seeing this very much. I like it whenever classic series get attention, and it's always fun to talk about these lists!

And by the way, I'm officially addicted to your blog. Everyday something great going on here...

Why thank you kind sir.

It's amazing what a few extra hours or a day off can do. I can't say I'll be able to keep this pace up as much as I'd like to. : )