A Case Against CGI 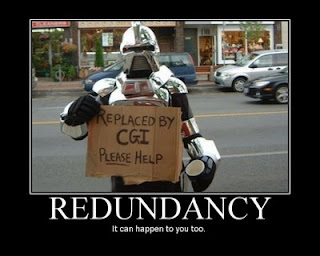 When CGI effects were initially deployed, I didn't think they were bad step. Just another tool for filmmakers. But then CGI effects became a crutch, overly used, and badly judged to be the end all (cough*** Michael Bay ***cough). Too often used to dazzle and enhance rather assist and compliment. Plus, now some directors came to believe they have to show every damn thing on the screen instead framing scenes for the audience's imagination (tip of the hat to John Carpenter). Good point, SFF!

CGI is what has relegated makeup legends like Rob Bottin to obscurity. I think the Greg Nicotero has the right idea of mixing practical effects with CGI but I still miss all the great effects that Savani, Bottin, et al did back in the '70s and '80s.

Boy, couldn't have put it better.

Some great input here. Rovolt indeed Siskoid. 3D is the new CGI and I began revolting against it some time ago. I'm with you.

I agree JD. I think enhancing practical effects with the best of CGI may be acceptable in some cases. I think of the space sequences in the new Battlestar Galactica, but there's nothing better than the handiwork of the Rob Bottin and Stan Winstons of the world. Wonderful works! Thank you.

i completely agree, CGI should only be used when other methods cant be used. for instance todays movies and TV uses CGI for car stunts, and they can be spotted easily. not like back in the day when car jumps had to be done real, like in the dukes of hazzard, knight rider, hardcastle and mccormick, the Fall Guy, you could actually see real cars jumping and crashing, these days days when you see the fast and the furious, its like WTF? The cars doing jumps arent even there and you can spot them as graphics. takes the whole excitement away. and dont even get me started with the horror movie effects. i prefer to see rubber any day than CGI, at least it looks like its really there ! XTRO from 1983 is a good example.

Yes, how about a film like Live And Let Die. The car chases and boat chases are phenomenal.

CGI should merely enhance a show when all other methods are exhausted.

Before CGI came along there were plenty of people are around being innovative and pushingt he boundaries with models and miniatures. Some did amazing flawless work while others did not.

I'm with you. I'll take the real thing any day, warts and all.