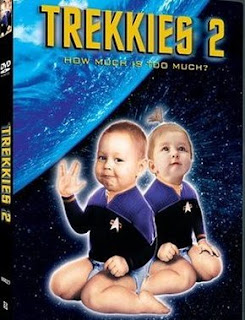 Trekkies 2 picks up where Trekkies left off. It essentially moves beyond the confines of its USA-based predecessor and seeks out new Star Trek fanbase life on a global scale [including a revisit with some old friends back in the USA]. They should have called it Trekkies 2: The Next Generation for kicks. Denise Crosby returns to here role as hostess. Crazy Fred Schneider of The B-52s lends his quirky cords to the theme song to lend a little [very little that is] soundtrack credibility to Roger Nygard's second documentary feature on centered upon Trek fans.

For some reason this one just isn't as good. I don't know if American Trek fans are more interesting and quirky or if it's a case of been there done that and it feels a little old. This one just doesn't remain as engaging. I like that Nygard goes back to revisit some of the original fans featured in Trekkies.
*
Some of the young Trekkies have all aged a bit and grown up including this one previously weird kid, the apparently popular Gabriel Koerner, who actually provides one of two fan films here on the DVD Extras. It's called ReallyBadStarTrek and it's really quite funny. His facial expressions and delivery are terrific and the fact that he's matured also has him displaying a much looser side. Koerner admits he had some growing up to do just like any of us, plus NO MORE MULLETT. In fact, Gabriel reminds me of actor Bill Paxton in this and lends the kind of humor Paxton injected into Aliens before he became a much bigger star. Anyway, he's made good on his dreams to become a CGI modeller working and winning awards for his input on the new Battlestar Galactica [he reworked the classic viper into the Mark II]. Nicely done Gabe! He's also become a much more likeable sort. I'm not the only one who noticed as he now has an extremely adorable wife to boot [and has indeed gotten laid]. God bless 'em! There's hope for geeks everywhere! You go Gabe!
Barbara Adams of Little Rock, Arkansas is also revisited. She is one of the oddest, but most genuine ladies you'll ever meet based upon the information from both documentaries. She's also one of my favorite Trekkies ever. I never thought I would see this in a million years. But, do my eyes deceive me or does Barbara Adams seem as though she's humoring her Lieutenant via her body language? A geek humoring another older geek that's even more out out there than her geek self. Fascinating.
*
Seriously, Barbara is thinking her Lieutenant is a bit out to lunch. Her Lieutenant's cute though. I think she looks a bit like an E.T.. She has to be someone's sweet little granny. Still, do you know what I like about Barbara? She cares about the people around her and she genuinely listens to them even when they may have spent a bit too much time at the old E.T. conference cooler. She's a good person and there ain't enough of them as it is.
*
This is a great bit with Star Trek: Enterprise Executive Producer Brannon Braga. He absolutely cracks us up with a story about a fan who has somehow found a way to merge Enterprise action with crabs. Go figure. Braga apparently gets all sorts of things mailed to him. This one just kills me.
*
*
I have also come to an astonishing conclusion. I do belive some of the hottest, most beautiful Star Trek fans to have ever graced the planet can be found in Serbia. Those very kind people have lived under such oppression that fans there seem like, well, normal. They are seriously the prettiest. It's as if someone gave them a taste of something new and everyone there just enjoys it. Sweet.
*
Speaking of hot, where the hell do you find these Star Trek fans at conventions? Apparently you can find these two in Brazil. I'm not sure if they speak English but who cares. Book your tickets now!
*
*
As for the future of the Star Trek franchise, this fellow from Germany gives one of the most splendid of analogies in making a point about an often discarded truism. Hysterical.
*

If you want to find out more about the world of fan films, you might want to check out my daily fan film blog, fancinematoday.com. Also, for what it's worth, I wrote the first book about the history and future of fan films, Homemade Hollywood, which is coming out at the end of November in bookstores everywhere.