Babylon 5 The Complete Third Season: Point Of No Return 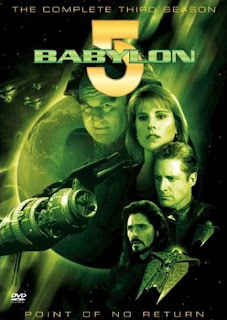 So there you have it, Babylon 5: The Complete Third Season: Point Of No Return.

You can't say I don't completely immerse myself in a program. That's how it feels watching Babylon 5 at least. I just can't help myself. I keep getting pulled backwards to soak in those details that continue to inform more recent entries in the Babylon 5 cannon. I know, I should probably proceed forward full speed ahead and then watch it all over again later. Admittedly it would even be more entertaining for me to watch it straight through, but I know I would miss many of the details. I still miss some of the details watching it as I do now with the stop and starts. I'll do my best to stay on task. Sadly, I do frustrate my son who sometimes joins me for an episode. He sees those nasty Shadows and he gets very interested. I feel so bad when he tries watching with me as he usually gets quite annoyed. "DAD! Again with the pause button. It is so frustrating to watch this show with you."

Let's face it. The world of Babylon 5 is a completely engrossing thrill ride. It's sci-fi like nothing I've ever seen and that's really how it should be. Having said that, I think part of what has slowed me is the fact the story has gotten so dense and episodes are so packed with layer upon layer of information building upon what has come before it. This has had me viewing with a magnifying glass or at least attempting to do so. In fact, things got so dense in the end I had actually forgotten what a quote unquote 'standalone' story was like.

Season Three's overarching theme is best illustrated by its subtitle, Point Of No Return. Everything is building and sending us hurtling into the next Great War with The Shadows. Season One definitively gave us the Signs & Portents of things to come. Season Two was the harbinger of The Shadows in the form of The Coming Of Shadows. Personally, Season Two definitely stands as my favorite season thus far. Season Three is a very, very close second for me and arguably better and more consistent than Season Two, but damn Season Two had some humdingers too. Gosh, it's a real toss up as to which one I enjoyed more.

Season Three has some nice extras including those All-New Digital Widescreen Transfers [this show would need significant love to make it to Blu-Ray based on what we see here]. Couldn't you tell it was a digital transfer? I didn't think so. The Soundtrack is Remastered in Dolby Digital 5.1. There is not only an Introduction by J. Michael Straczynski but Audio Commentaries on three key episodes by Straczynski, Bruce Boxleitner, Jerry Doyle, Richard Biggs and Ed Wasser. Documentaries include: Behind The Mask: Creating The Aliens Of Babylon 5, Building A Better Narn and Designing Tomorrow: The Look Of Babylon 5.

Anyway, I know it seems as though I'm taking my sweet ass time getting through this amazing series, but I am enjoying it. I would simply have to agree that I'm not exactly moving at the briskest of paces.

My favorite season is the 3rd, though arguably the 4th ist more consistent. The 3rd has more of my favorite episodes, though. But the 2nd is close, I agree.

As usual, I am in agreement with M here.

While season 1 has it's moment, it really has no place in a "competition" like this. I love it to death, with all it's flaws, but the rest of the seasons operate at a different level.

Season 2 still has the whole mystery/buildup thing going. There are some HUGE ones there, and it is one of the greatest seasons of television ever.

However, as M also points out, season 3 has more of my favourite episodes as well. I had an adrenaline kick that wouldn't quit the first time I saw Severed Dreams, when they ripped Kosh to pieces in Interludes I walked around in a constant state of shock, and when I saw Z'ha'dum I was a mess. Talk about being into something to an unhealthy degree.

I also agree with M that season 4 is a very strong one, though not flawless, as you will soon see. On average, it may not reach the highlights of S3, but it never goes quite as "low" either. Another very strong season, and with some VERY strong episodes as well.

We'll cover season 5 when we get to it. Opinions here are more divided, and it will be interesting to see your view on things as someone not into the day-to-day drama of following the production of the show (through the "diaries" of jms online), as some of us were. :)

harvemunken's point with respect to season 4 is well taken: It may not reach the highlights of S3, but it never goes quite as "low" either.

There were a few stumblers in season3, like Exogenesis, or Grey 17. Season 4 doesn't have episodes like these. But it also doesn't have a "Passing through Gethsemane".

I love seeing fellow fans of the show's opinions of the seasons and the different reasons. It is always interesting to read. It would appear M would probably concur with Havremunken concerning Season One. I know she is certainly a big fan of O'Hare.

It's funny, I think we are all on the same wavelength regarding Two and Three and while I cannot wait to watch all of Four through. I am intrigued by the prospects of Season Five based on all of the varied opions concerning it.

Guys, I just wish I had more time for viewing the darn stuff.

One thing to push you off in the right direction; We've all had our say regarding season finales; If we're talking season *openers*, IMHO, the wolfenstein opening to S4 beats all others. Season 1 was cute in its' way, S2 and S3 were great, while S4E1 chews you like some of the S3 episodes - it's a good ride.

So enjoy the episode. It knows your name. ;)

I best get started then.

As for season 1. I'm not sure if I'm a "big fan" of O'Hare/Sinclair. I just think he's getting too much flack; considering the character, he was a decent actor in my book.

I think season 1 was uneven (to put it mildly). But there were about five or six episodes indicating that this wasn't your average sci-fi show.

Season 3 was the only season with no interference from studios, networks,whatsoever.

btw., Ly is right; wait until "Atonement" before getting back to "Avalon".

As always thanks for the input M. I definitely found a different feel to Sinclair looking back at some of Season One recently.

So do you mean to tell me the studio interfered with Straczynski's plans in Season Four and Season Five?

It's just that the Network PTEN was about to be closed down, and they told JMS there might be no season 5. As a result, he tied up some plot threads in season 4 that originally were supposed to extend into season 5.

ahhhh.... and thus perhaps the arguably inconsistent Season 5 that followed as a result.