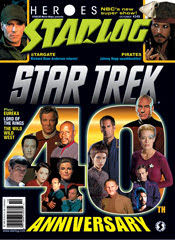 This is the best Starlog could do for Stargate. These are the two best covers featuring Stargate's Richard Dean Anderson and Stargate Atlantis' Torri Higginson. You could say pathetic! 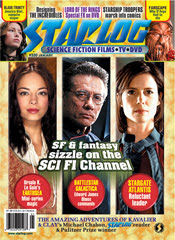 There is still time left to pick up the latest issue of Starlog [#360] featuring an article on actor David Hewlett's film A Dog's Breakfast and his role on Stargate Atlantis. Look Starlog is still one of the premiere news sources on our favorite science fiction, but I do have one bone to pick with the publication. 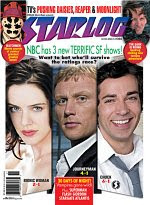 The magazine has had some nerve over the past decade. It has spotlighted covers on Star Trek [41 times], Battlestar Galactica [5], Farscape [2], Babylon 5 [2], Andromeda [1], Lost [1], Firefly [2] and even Heroes [1], not to bloody well mention Earth 2 [1] [more on that sore excuse for science fiction later]. I won't even go into the other nonsense that received cover shots over the years, but not a single issue has ever been dedicated to Stargate or Stargate Atlantis. Would not a 10th Year Celebration issue have been appropriate? Would not the launch of a new Stargate series in Atlantis have counted? Something? Oh sure, there have been the ocassional inset pictures, but never has there been a cover story for one of science fiction's greatest storied series. Hell, Stargate has made The Guiness Book Of World Records for longest-running science fiction series, but apparently is undeserving of a Starlog cover photo. What is wrong with this picture? How could a publication with the word 'Star' in its very title not once dedicate a cover to Stargate? A travesty I say. Starburst, Cult Times and TV Zone in the UK have all dedicated covers to the heroes of SG-1. But not once in over 10 years could America's finest science fiction magazine find a single month to highlight Stargate and let it grace its own historical run. Now how on Earth does that happen? Perhaps, Starlog in an alternate universe summoned the will to commit the series to a cover print or some Starlog publisher out there on P3X-118, but certainly not here apparently. Hmmmm....... that's one crime I'll never understand.

If there is one thing to be learned by this, it's you don't need the COVER to be a success.
Posted by SFF at 6:25 PM