Ah yes, the classic, original Battlestar Galactica. Okay, so it doesn't hold a candle to the new series in many respects. The thing about the original was its charm and sincerity. It was made at a time when pretty much everything on TV was wholesome. So sure it doesn't have near the teeth of the reimagined series running on Sci Fi Channel, but it had adventure. It had vipers! Okay so what if it was the same shot played over and over. I never knew it. It had Starbuck and Apollo. Watching that show through my wide-eyed innocence was like watching Santa bound down the chimney. It was awe I tell you! And man it had that damned daggit too [wee cute monkey in a robo-dog suit]. I just loved that dog ....errr robot. Whatever. It was the coolest dang dog daggit I'd ever seen.


Here's a look back at one of the most memorable sequences from my childhood waaay back in the original from 1978.

The sequel [so to speak] to the original series, Galactica 1980, is coming out [finally] on DVD the day after Christmas. To be honest, I've never seen it, but I intend to despite everything I have heard to the contrary of it even being close to good. Kent McCord [of vintage era "1 Adam-12, 1 Adam-12" fame and later a role in the remarkable Farscape] stars.
Oh and those nasty, shiny, metal cylons are a whole lot shinier and easier on the eyes now. Yes, they've come up with something a whole lot sleeker and softer and they come with skin and legs, yes long legs, in the form of number 6. These cylons look strikingly like Playboy bunnies. Somehow I couldn't see my mom letting me watch number 6 [played by Tricia Helfer] as a kid. 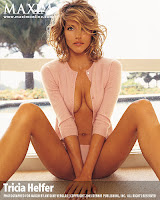 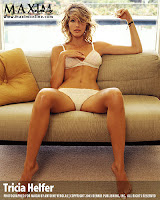 No definitely not! That is just way too hot for TV and way too hot for my corruptible and fragile mind. Cable didn't exist! And this cylon would have no shot at primetime in the 1970s. Ouch! [gulp!] Bad guys never looked so good! Please take me! Take me now!
Posted by SFF at 8:50 AM

i've always liked the new battlestar but the featuring of all along the watchtower in the season 3 finale turned like into fanaticism.

it'll be hard to top that episode.