"I've never been a big fan of time travel stories. They often seem to involve a cop-out at some point, where time travel simply undoes everything.
They also hurt my brain.
I'm still not quite right after the story breaking session for Moebius (Stargate SG-1's two-part season eight finale)....
I think it might be one of the best endings I've ever written.
When it comes to shooting Time, we made a vow to try not to do too many stories set in among trees as we had done on Stargate SG-1 and Stargate Atlantis.
We wanted Universe to feel more alien, at least starting out. So I set the episode in a jungle, and to up the creepiness, I wanted it to be set at night and to be raining."
-Robert C. Cooper, Stargate: The Official Magazine, #33, p.25-27- 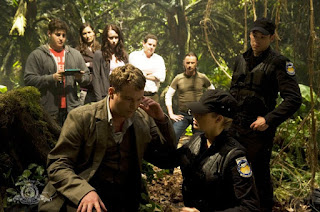 Mission accomplished. With a nice nod to Alien (1979), to boot, Cooper genuinely creates a stellar time travel tale. And for the record, time travel stories hurt my head too. I'm not generally a big fan of them, but Stargate Universe Time is indeed one of my favorites within the sub-genre of science fiction. See my full analysis of the episode right here. 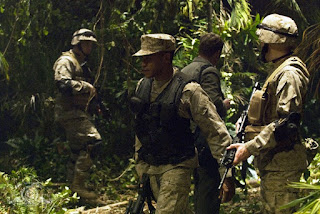