I Remember That: The Blizzard Apocalypse (Dreaming Of Nuclear Power And Blogging)

The icy villain in Marvel Comics' Iron Man, Blizzard, was one of those classics and so was this blizzard of 2013.  I loved Blizzard from the classic Marvel books, but the storm maybe not as much.  I still love my Marvel books.  My room had piles of the STILL ONLY 25 cents comics.

Well, Blizzard struck us all hard this weekend.  He's a dastardly villain.  Unfortunately it wasn't exclusively within the fantastic and sun-tainted comic book pages of The Invincible Iron Man issues I enjoyed growing up.  He struck with a vengeance for real.  I could have sworn I saw him through the snow filled, wind-driven fury on Friday night. 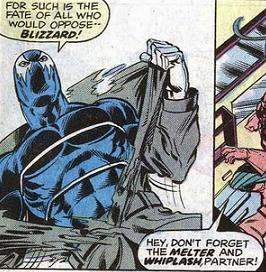 Holy Toledo! The winter storm of 2013, or Nemo as it was referred, was no joke and its effects linger on.

It's been positively brutal to New England and the surrounding areas.  We were slammed hard.  My optimisim was quickly snuffed.  Power went out about 8:00 PM Friday and as of this writing returned roughly 48 hours later to some, earlier to others and, sadly, still others are on ice.

The family in the last few years alone has endured one flooding period that was like nothing we had ever seen.  You could swing in the basement.  Well, goldfish could have anyway.  Perhaps a small mammal or reptile aquarium could have been developed. 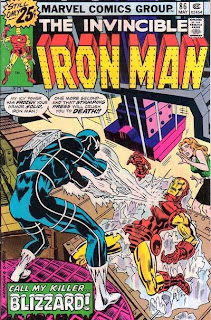 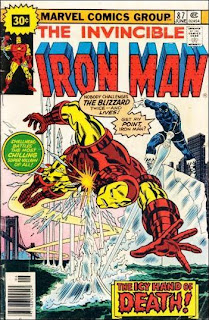 Hurricane Sandy was far more brutal to some.  We escaped that one.  It was the hurricane a year earlier that was a borderline category one that devastated my area.  We lost power for three full days.  Some had it much worse.  Fortunately, despite the many downed trees, we escaped much of the physical damage.  But power loss in the warm weather is better than loss with temps below 20 degrees.

We slept through the night Friday at roughly 51 degrees.  Not bad at all.

Saturday brought a day of intensive labor from shovelling to clearing areas for my terrier to getting a fire going in the house.  Honestly I don't think I took a break the entire day except to drink a beer in the snow followed by a frozen yogurt, but not the normal frozen yogurt.  That was a nice taste treat.  An igloo filled with ice bombs.  Elf would have a field day. 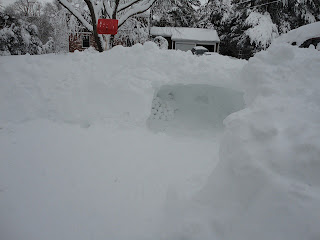 As I said, we lost power Friday and I knew it was bad.  The trees were draped with snow and wilting into the streets and yards.  They hung heavy. Some snapped and wires were down in areas.  It was not good.  Immediately I suspected it would be days.

That Friday night, I bagged up all of my frozen goods and other assorted items and threw them into the snow in the back yard.  That part has been fine.  I actually never lost a piece of food.  I couldn't cook it either but at least it was still good. 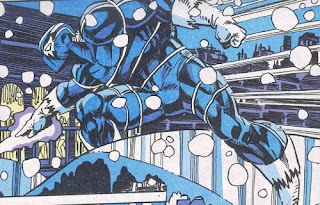 By Saturday night after a day of snow shovelling and fire maintenance, I was beginning to feel like an extra from Mad Max.  I was looking the part too.  It wasn't pretty.  Clothes would get wet and you'd grab whatever you could to keep warm.  So by the end of the day we were a rag tag bunch.  The assorted assembly of clothing was such a hodge-podge, I would have looked great in The Road Warrior, Alien 3 or Waterworld.  I looked the total freak. Of course, not a stretch really.  I didn't care.  I was warm.  The kids played in the snow after helping.  They were fairly undeterred and unconcerned, which was good.  All the worry is always on the folks.  I also had soot on my face with the 5 o'clock shadow.  No joke.  I was looking good.  It felt like a scene from a winter apocalypse film - say The Road, because it was a long road that day. 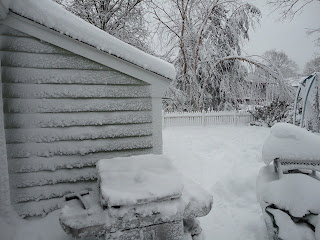 The One To Be Pitied started a fire.  She really did too.  Granted, I was the one to be pitied.  She came outside.  "Something is wrong.  Smoke is filling the house."  Oh no.  "Did you open the flu?" I jumped.  I ran into the house to find a raging fire and a smoke-filled room.  I reached into the flames and got the flu open.  Good grief.  I was not pleased.  So, here we were trying to get warm, conserve what heat we had left in the house and now we had to throw open all of the windows to let the smoke out.  The One To Be Pitied felt pretty bad about it and she'll never live that one down.  It must have taken me a few hours to get that fire stable. I reached deep into the snow for kindling from my neighbors house.  I knew they had a pile of broken branches out there and I plunged my hand into the snow and came up with pay dirt.  By mid-day I had the fire stable and rolling.  But it was a long and tiring day alternating between the fire and shovelling. 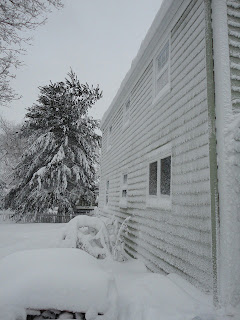 The One To Be Pitied then opened the front door to let the smoke out and the snow drift fell into the doorway and the door wouldn't shut.  The Sci-Fi Fanatic was back in action chipping away ice and the door was sealed shut once again.  I turned to The One To Be Pitied and said, "OK, you're 0 for 2, stop trying to help me."  I think she curled up into an ice ball for the rest of the day.  We laugh about it.

By 5:00 I roasted hot dogs and beans on the grill before we lost daylight.  It's just easier to cook then.  The hot dogs roasted up nicely.  I was so hungry they were the best tasting damn hot dogs ever!  Yellow Mustard. Dark Mustard.  Relish. Celery Salt.  Yummy goodness.  Groceries on ice. Night fell.  With the family inside we walled off the fireplace room with blankets.  It's an old trick my mom used when we had one air conditioner.  We used blankets to wall off our bedrooms from the rest of the house.  It helped.  It was the warmest room in the house.  Temps by night were about 48 degrees but dropping.  We ate kettle corn.  The neighbor had a gas stove and we heated up a kettle of hot water there.  It was good enough for a round of hot cocoa and got us warmed up nicely.  I tried reading a little by candlelight but I couldn't do it.  I was trying to read Back To Frank Black.  I wasn't sure if it was the low lighting from the candle or the fact that I was plum knackered.  It was like a seance in there though. 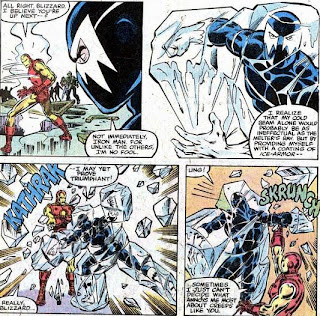 I tell you I was praying for power at that point.  I was praying to watch Fringe.  I was dreaming I could blog.  I was hoping for a warm shower.  I was definitely dreaming of nuclear power and blogging.  I was telling the family if the power comes on I am going to toast to nuclear power.  I was definitely missing it.  We were all watching Rise Of The Planet Of The Apes (finally) when we lost electricity and the whole thing started.  We never finished it.  My kids were really rooting for Caesar.  Who wouldn't?  They are dying to find out what happened to Caesar.  Of course, my ever sharp son says, "You know what happened.  You saw Planet Of The Apes.  That's what happens."  My daughter replies, "I know, but it's just so sad."  They are cute.  Bushes and plants are completely crushed. 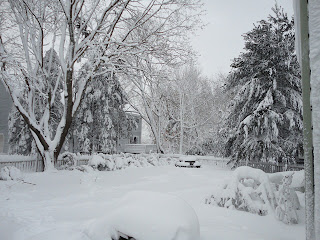 The cold sucked but what can you do? You feel like you are losing precious valuable time and your life is ticking away as you look at the candles and the fire place bundled up.  At 44 degrees you start to have very little interest in doing much.  How did people do this hundreds of years ago?  Blizzard gives new meaning to gun control. 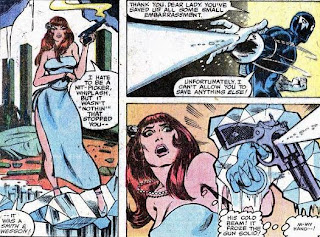 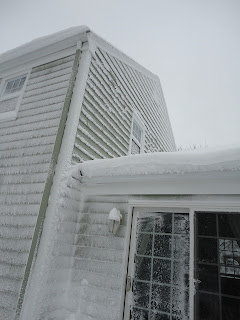 So we all threw on some winter caps and a couple of layers of clothes and attempted sleep.  There's nothing else to do but sleep.  7:00 PM feels like midnight.  Of course you really don't sleep well either.

We woke up to 41 degrees on Sunday.  Of course, it was better than the outside temps.  I felt pretty optimistic the pipes would be fine.  My dog Maisie was shivering when we woke up.  That didn't seem like a good sign. There were major substation problems.  We thought it best to bail for awhile.  Coffee sounded good.  I found a good warm spot and it is there where I typed this electronic missive.  Oooh I like technology. 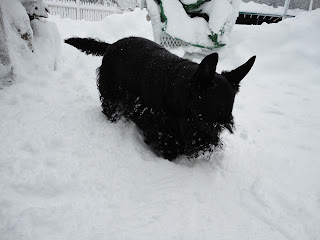 Folks, it was mildly challenging and exciting fun for sure.  Unfortunately my blogging momentum has stalled a bit. It could always be much worse though and I'm grateful.  Prior to power restoration, I saw snow dripping from the trees in the sunshine.  That's always a good sign. I'm fairly gross and a shower is in order soon.  I just need to take out a few gang members and get some gasoline for my Ford Falcon.

Despite the crazy storm, they aren't actually classifying this one as a blizzard.  Oh well, it was bad enough and as far as I know they don't have a Marvel villain called Nor'easter.

These events make the memories though.  They really do.  One day, we'll say, I Remember That.  I know we're already smiling about it and I suppose you count yourself lucky when you can do that. 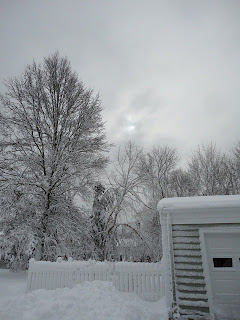 I had heard it's pretty brutual back East. I'm glad you survived the "This or That" game. ;)

Hello Maurice. Don't get me wrong. It wasn't The Grey, but it was challenging from a modern living perspective.