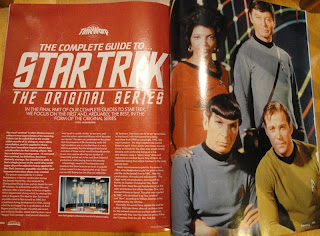 In honor of the 45th Anniversary of Star Trek: The Original Series I bring you the latest installment of the SciFiNow Best and Worst lists. 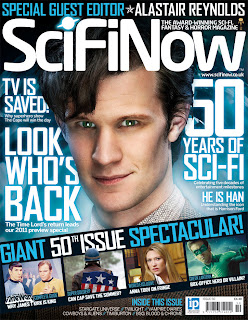 SciFiNow #50 presents yet another look at the best in science fiction and perhaps the worst. But as I've said before, even the worst of ST:TOS is far superior than some of its best sci-fi competition, well, most of the time. I'll have my own list to present one day, but for now the best and worst of ST:TOS. 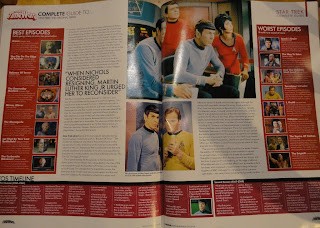 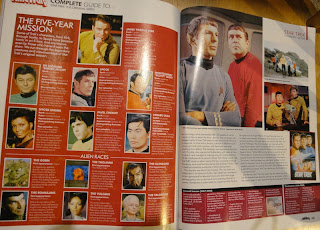 Tough to refine a best of list with eight entries. There are some notable omissions. The Enterprise Incident comes to mind for starters. I have my personal favorites too like Shore Leave and The Galileo Seven, which aired back to back ringing in the new year between 1966 and 1967. For genre fans what about the classic Spectre Of The Gun? Clearly Season Three wasn't all bad. What's missing for you?
The Worst: 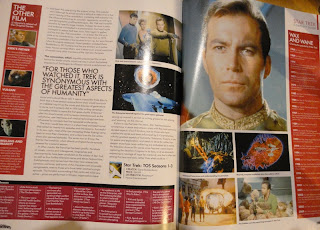 Anyone care to disagree or add some additional lemons? Happy 45th Anniversary Star Trek: The Original Series. You were not only one of the finest science fiction series ever made, but one of the finest television programs ever created. Your influence on me was profound despite my ignorance of the bigger picture. It was simply vibrant, childhood bliss.
I spent many nights watching Star Trek in syndication with my grandmother who loved the show, simply because it was outstanding television. She's now 93. Live long and prosper indeed.
Posted by SFF at 6:45 PM

Fascinating list, to take a term from Mr. Spock's vocabulary.

I don't agree with this list (particularly the inclusion of "Arena"), but such lists are always good for fostering debate, so I appreciate them.

I've always been a huge fan of D.C. Fontana's "This Side of Paradise," and that episode is my personal selection for best episode. It shows Spock at his most vulnerable, and gives Kirk a great speech about our need to "claw," "scratch" and fight our way through life.

And that ending -- "For the first time in my life...I was happy..." is a gut-punch of the highest order that gives real insight into Spock. A devastating ending, on top of an emotional and fun show.

I'm also shocked "Journey to Babel" and "Amok Time" (two additional favorites of mine) did not make the list. Both episodes showcase Vulcan culture/tradition to a high degree, and also reveal new sides of the Kirk/Spock friendship. "Amok Time" is probably in the top three or four episodes of the series for me...

Exactly, all three of the episodes you mention are amazing and I would have thoughts at least two of them if not all three would make it.

I think your selections are more properly the kinds of Star Trek events that are top to bottom classic and probably deserve a listing. Maybe if they had a ten list they might be there.

I would say some of the ones I like are personal favorites and maybe not quite tp 10 caliber. Though, personally, I love them. Save for The Enterprise Incident. Fontana does it again and it deserves a spot.

Thanks for the input John. Best, sff

Hopefully we'll get some other asessments here.

Y'know, I've come to believe some of these lists, like tech and political pundits coming up with stick-in-the-craw statements, are too often set to spark and generate reaction. I'm not immune to it either. Like when I saw their #1 selection. I'm happy 'Arena' is represented in the 'bests', but not when it's above a good many here. See, a reaction ;-).

I wouldn't put it above 'The City On The Edge Of Forever' or 'Balance Of Terror', but yes in front of 'The Doomsday Machine' (another one a little too high for my tastes). I'd add those you and John came up with. I'd add "Metamorphosis" (for its touching sense between two beings) and "Where No Man Has Gone Before" (because without that early good and successful one, we may not get to see the other episodes to come). And where the hell is "Space Seed" and Richard Montalban?!?

For the worst they included "The Empath"? Really? To me, this was one of the unexpected ones that, perhaps not great, held an interesting idea that only a Star Trek would even dare to approach (decades ahead other sci-fi series, in fact).

Very nice you included your memories of childhood and how ST played a role, SFF. Live long and prosper indeed. Thanks.

Thanks L13 for the response. You've inspired some additional thought here.

I think you may be right, or the subjective love for Star Trek appears to be readically different out there which may certainly be true.

I love Arena as well. There's a classic cat and dog feel about this action-packed adventure. Mind you, it's action-oriented in a way reminsicent of Obi and Darth's duel in A New Hope. That speed is very nostalgic.

Space Seed too is a strong entry, but is often considered imperfect and far less than its superior film sequel. Still, as I said, so much of Star Trek is just perfect and this would easily be high on my enjoyment list too.

That was the appeal of so much of Star Trek. My wife loves the old movies. I like Star Trek for many of the same reasons. There's a different speed and sure it's nostalgic, but there's a heavy emphasis on character, ideas and sheer craft and ingenuity to these works that is missing from the almost lazy, CGI-intensive fare of today.

Thank for your selections, all exceptional by the way.