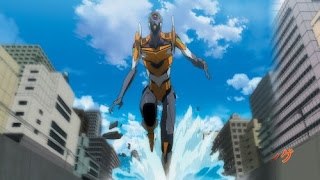 Eva-00 from Studio Gainax TV Series Neon Genesis Evangelion. The image selection is from the second Rebuild film You Can (Not) Advance. 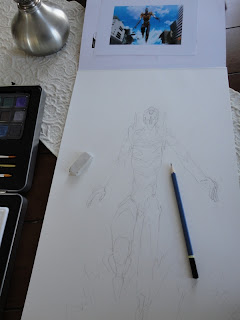 "So Dad, whatever happened to your artwork dreams?" my Boy Wonder says to me with a hint of sarcasm. "Hey, easy does it there big guy, I've finished two quote and quote pieces of art and that's better than nothing." He pushes, "Where's number three? You need to get on it." "On hold," I reply. "I'm a little busy taking care of you sonny boy." Great kid, but fresh as a bag of Wonder Bread.
This is the second official watercolor by The Sci-Fi Fanatic. The process was similar to the route taken for my painting of Eva-02. Interestingly, Eva-02 came together very quickly and in the end worked rather well. Eva-00 was assembled beginning with the sketch and ending with the finished product as well, but the process was slower due to the specificity of detail in the Evangelion. 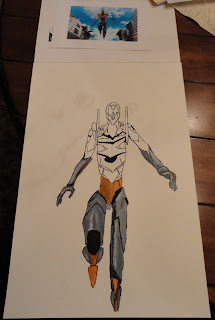 I welcome the painter's advice out there regarding outlining. I have been utilizing black paint for the outline. I've always been a big fan of black outlines. Is this the way to proceed? I know it's art and it's wherever your creative desires take you, but I'm sure I am violating all kinds of painting rules.
In the end, the sketching process began and ended with the scrapping of one sketched image. It wasn't centered enough. This image isn't centered completely either, but it's far better than my first attempt.
Painting it was another story. I made mistakes with my first painting and I probably made some mistakes here. The watercolor paints were applied in spots heavily without water. I was definitely looking for texture, but some cracking occurred. I kind of like cracking. It makes you realize it's a painting. Of course, I don't want paint falling off. At the very least it stayed in place for the framing process. 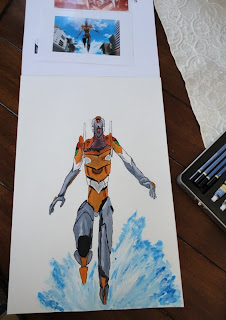 The biggest problem I had with this character was getting the face of Eva-00 just right. The image I was working with was so tiny that I improvised the details in the hands, face and elsewhere as I saw fit. The face was a particularly troublesome area. I've seen many images of the Eva-00 face and this one was at such an odd angle it was difficult to get it just right or fully generate the sense of depth that is within the face. I used a variety of images as a guide, but ultimately I had to resolve it. I was having such a tough time with the face I sat on the painting for awhile. Furthermore, the background was originally violet in color in and around the clouds, but I opted to change it to an orange hue. I like orange. Still, I wasn't exactly sold on this second outing. I was definitely fonder of the first painting, but this one is growing on me. Anyhow, after sitting on the painting for about two weeks I finally pulled it back out and looked at it and it appeared to be better than I had remembered. Does that seem strange? Perhaps I was too close to it. It's not perfect but my son felt it should be completed and thus the framing process commenced.
I made my embarrassing trek to Michaels and off it went. Eva-00 is the finished product you see before you. What are your impressions of it? 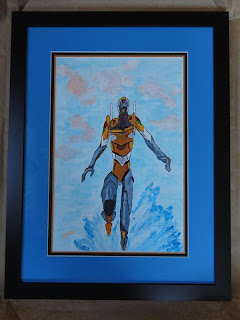 My next effort will be to increase the painting size for a centerpiece between Eva-00 and Eva-02. Yes, Eva-01 will be the third and final painting in The Sci-Fi Fanatic's Evangelion series watercolor painting experiment. I have yet to start it. After that I'm not sure, but I'd like to do something different. I've got my mind spinning on that race car, the G-2, from Gatchaman. Perhaps I'll just paint a fairy for my daughter The Girl Wonder. She'd like that.
Posted by SFF at 5:05 PM

Great to see this post return from Blogger limbo, SFF. You've a great eye and a fine artist's touch, my friend. Thanks for sharing your work.

Nice painting. I don't have any advice it seems as if you have a pretty good handle on it.

Thank you. Mind you I have plenty top learn. But, doing it for fun and with no one but myself to please I get a lot of rope.