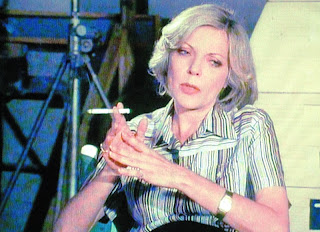 It's a FAB FRIDAY with Barbara Bain on the set of Space:1999 Year Two from the fabulous world of Gerry Anderson. So grab yourself a fag! 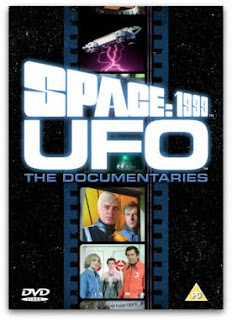 I finally took time out to watch the lengthy Space:1999 documentary that I purchased from Fanderson. It wasn't remarkably illuminating with all of the information that we've learned about Space:1999 along the way and at our disposal across the web. Nevertheless, it was certainly interesting to see interviews with all of the cast members including the late Barry Morse and Johnny Byrne. It's a tremendous time capsule to both UFO and Space:1999 spending time on both Year One and Year Two of the latter series with good attention to detail and the move away from UFO. There are three distinct segments highlighting the stories for each year of both series.
There are plenty of unexpected shots and the occasional behind-the-scenes footage that keep things entertaining with these amazing cast members including contributions from the late Ed Bishop. Gerry Anderson, himself, offers some of the best, candid, behind-the-scenes information. He's quite an honest, soft-spoken gentleman. 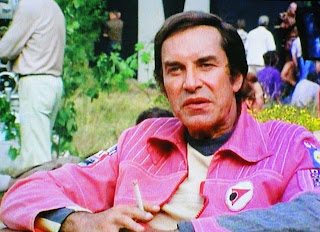 The fan film, Message From Moonbase Alpha, featuring Zienia Merton is serviceable as a final farewell to the Space:1999 series, but certainly not essential viewing.
Played together, the documentaries capture a fascinating period in the history of science fiction television, the stunning work and vision of Gerry Anderson and the sudden, unexpected transformation of UFO to Space:1999 with a detailed, visual eye and sturdy analysis as narrated by Shane Rimmer [Thunderbirds].
One question, were there any FAB non-smokers in the 1970s?
Posted by SFF at 7:38 AM

I remember very much enjoying these fine documentaries when I watched them.

Like you, I was taken aback by the fact that Commander Koenig and Dr. Helena Russell were smoking cigarettes!

It's just so amusing. Further, Landau really talks up the brilliance of Year Two and what is going into that particular new season. I know he's talking the party line, because in other interviews he was not as kind. He kind of talks out both sides, but then again everyone has a right to change their opinion on a subject.