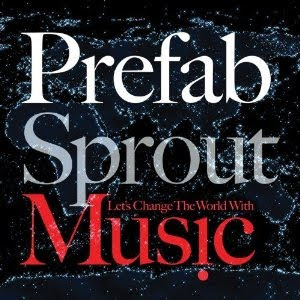 With a title like Prefab Sprout's Let's Change The World With Music [2009] you almost wish there were more pie-in-the-sky idealists out there making music in the world like lead singer/ songwriter/ multi-instrumentalist Paddy McAloon.

At the very least, you wish your fellow man had a similar optimism. I could use a little of it myself from time to time. In point of fact, this particular project was inspired, but that's nothing new from the heart and soul of Prefab Sprout's McAloon.
*
Speaking of sprouting, I was a late bloomer catching on to Prefab Sprout back in the day. I didn't actually get a lick of who this group was until a friend of mine, from East Sussex, England, sent me an audio cassette in the mail. The homemade cassette tape [a la High Fidelity] contained one track by Prefab Sprout called The King Of Rock 'N' Roll. With an outrageously catchy refrain of "Hot dog, jumping frog, Albuquerque" I was hooked like a trout off a fishing rod on a gorgeous summer's day. It was then that I knew I had to investigate this band called Prefab Sprout that had so insanely infected me with their sweet sounds and sultry piped refrains. I had to know more about the wordsmith behind the magic and if given the chance to hear one of their singles you'll need to know more as well.
*
The band's name is quite frankly a distraction to me. I never liked the band's name and I had heard of it many times. I always scoffed at the idea they were any good at all, but merely pretentious for art's sake. It turns out there is much more to this act beyond the surface of its name. It was definitely a case of never judge a book by its cover.
* 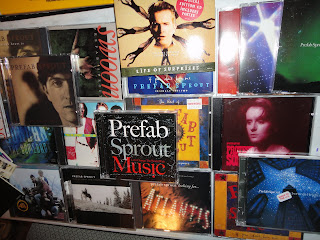 To make matters worse the UK band Prefab Sprout certainly never took off stateside despite songs paying tribute to America like The King Of Rock 'N' Roll and Hey Manhattan and album titles like Steve McQueen [1985], From Langley Park To Memphis [1988] and The Gunman And Other Stories [2001]. Steve McQueen was dubbed Two Wheels Good in the USA and is a certified classic destined for coverage here on Musings Of A Sci-Fi Fanatic.
*
In the end, Prefab Sprout, with a truly uninspired name, just never took hold. It's really a shame too because they are one of the greatest pop acts to live born of the creative overspill of the 1980s. The band was the magnificence of singer/ songwriter Paddy McAloon, a kind of pop genius in the vein of Roddy Frame [Aztec Camera] or Roland Orzabal [Tears For Fears]. Without McAloon there would be no Prefab Sprout. His touch and input is essential. It is the heart of the music. He writes and orchestrates all that lives and breathes musically within the band. The rest of the group included female vocal foil Wendy Smith, brother/ guitarist Martin McAloon and for a time drummer Neil Conti. Prefab Sprout easily ranks among the greats next to Tears For Fears, The Human League and Thompson Twins, but you'd never know it on this side of the pond. You don't make music coming up on three decades and simply suck. Though, The One To Be Pitied seems to differ with me on this point. To each their own of course.
* 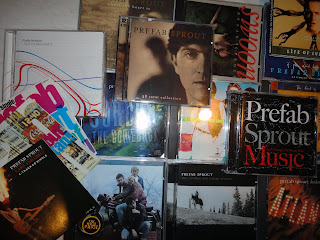 Paddy McAloon, a fairly mild-mannered, reclusive gentleman has taken to a reclusive sort of lifestyle. His once prolific ways in the 1980s have given way to the kind of output that is correlated with The Human League, meaning new music is a rare thing indeed.
*
But McAloon has been beset and plagued with health issues over the last decade, which are sure to slow anyone. Ailments including hearing loss or hearing impairments [Meniere's Disease] well as issues with his vision have for periods crippled the pop romantic gifted with a way with words. With the band essentially disbanded and the Prefab Sprout name in his hands, it is entirely up to McAloon whether or not material gets released.
* 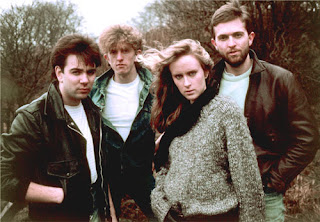 His back catalogue or archives is immense too. Following some wonderful moments on Andromeda Heights [1997], McAloon returned solo to steer the Prefab Sprout banner with one from the vaults in The Gunman And Other Stories [2001], a tribute to the American West. His health issues ensued shortly thereafter. Amidst these health problems McAloon released a mostly instrumental work under his name called I Trawl The Megahertz [2003], strictly for completists. It was indeed very different project from the man behind the Prefab Sprout trademark of dulcet pop and eloquently penned songs. There wasn't a single track that truly featured THAT voice. Nearly a decade on, McAloon reached back into the archives and released Let's Change The World With Music [2009]. This wonderful collection saw the light of release in the US in October of 2010, which is why I thought it worth mentioning here.
* 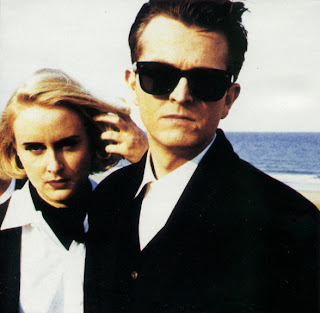 Prefab Sprout is best known for a classic 1980s masterpiece of delight in Steve McQueen, but Let's Change The World With Music is yet another in a long line of truly remarkable, solid, if not classic, works that ranks strong among them.
*
There is something special about every project issued by Prefab Sprout and all are worth your time especially Steve McQueen, From Langley Park to Memphis, Jordan: The Comeback [1990], Andromeda Heights [1997], the irresistible best of 38 Carat Collection [1999, and the latest Let's Change The World with Music.
* 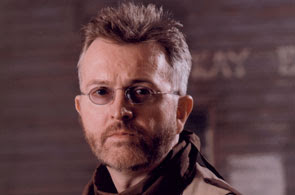 Highlights from the project include Let There Be Music, Ride, I Love Music, Earth [The Story So Far], Falling In Love and Sweet Gospel Music. The record label originally balked at the recording in the early '90s because of McAloon's gentle references to Christianity that populate the work. While certainly not a Christian rocker, Paddy McAloon was writing something from the heart and from where he was in his life. The labels, as you know, aren't looking for honesty in their pop music but moneymakers. McAloon has always been about the song. But, he's been a fortunate man gifted with a flawless taste for melody and a good tune. As a result, the project was shelved and finally sees the light of day. Its production fits nicely between the equally impressive Jordan: The Comeback and Andromeda Heights.
*
Check out Prefabsprout.net for all the latest on Prefab Sprout. 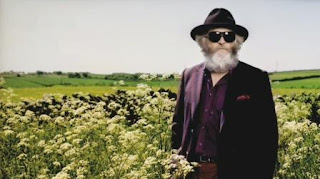 To get started on Prefab Sprout, you need look no further than the 38 Carat Collection. This 2 CD set will give you everything you need up to and including selections from Andromeda Heights. Though, should an expanded edition ever see the light of day for Andromeda Heights it would serve you well to pick it up. Some of his finest b-sides adorned several of the CD singles from the period. It is a wonderful collection missing a few highlights like Wild Horses and The Mystery Of Love, but is otherwise perfect. It breaks my heart to see classics like Paddy McAloon grey and age like the rest of us, but if this project is any indicator there is hope that another one still remains in those vaults. He has them and he's one musician and songwriter that I pray never fades away. May your health improve Paddy McAloon. We enjoy your returns even if they are few and far between as this lovely, little unearthed gem.
*
Prefab Sprout Discography:
Swoon [1984]
Steve McQueen [1985]*
From Langley Park To Memphis [1988]*
Protest Songs [1989]
Jordan: The Comeback [1990]*
A Life Of Surprises: The Best Of Prefab Sprout [1992]
Andromeda Heights [1997]*
38 Carat Collection [1999]*
The Gunman And Other Stories [2001]
I Trawl The Megahertz [2003] [Paddy McAloon]
Steve McQueen [Remastered] w Acoustic Ep [2007]*
Let's Change The World With Music [2009]*
*essential
*
Update:
My friend Leopard 13 over at Lazy Thoughts From A Boomer stopped and reminded me that today, December 8, 2010, is the anniversary of John Lennon's passing thirty years ago. The man, who changed the world with music, lives on and his spirit lives on through the likes of composer Paddy McAloon. If anyone understands the power of song and the soul like Lennon, it's McAloon. Like Lennon, he's been the consummate composer and songwriter more interested in expression and communication through his writing than with the pomp and circumstance of stardom. While certainly not the legend of Lennon, McAloon, too, imagines a world where the power of his music will resonate long after he has perished this world. So it seems unintentionally fitting I should coincidentally channel the once great songwriter in a tribute to McAloon. This tribute goes out to two amazing men in John Lennon and Paddy McAloon and their music and my continuing love of their songs. Let's change the world with music indeed.
Posted by SFF at 10:03 PM

The post made for fun reading on this sad day. I'll check out the tracks you highlighted, SFF. Thanks for this.

I have to tell you - I must have been unintentionally channeling John Lennon. This CD by PRefab Sprout seems so positively fitting in spirit as a kind of contemporary kindred spirit to all of the wonderful words ever written and pronounced by the late Beatle through Music.

Honest, unintentional, but really, so perfectly fitting if you ever heard this CD. Thanks again for reminding me of the fact it was this day John Lennon left our world, when he was so definitively changing the world with music himself.

I think Paddy McAloon respects the spirit of that world view through his own song, just take a look at Protest Songs as another example and you'll see. Cheers for helping make this connection.

Thanks so much for the shout-out and the update (with its keen insights regarding the music of John Lennon and Paddy McAloon), SFF. :-)

My pleasure and honestly most fans of Paddy McAloon understand where I'm coming from on this. Fans of John Lennon might scoff at the suggestion because of his legend, but the comparison is real.

Thanks for your excellent overview of Paddy's career.

I feel compelled to comment on the John Lennon comparison. I can sort of see the Lennon similarity lyrically (the idealism). However, musically he sounds like Paul McCartney all the way. The Broadway musical and Tin Pan Alley influences are there in spades.

My immediate reaction to your comment was, "yes, yes precisely I could agree more. Absolutely!" so yes I wish I had made note of the pop sensibility of Paul McCartney to go along with my Lennon comparison. Any way you are right on.

Mcaloon indeed has the idealism of Lennon and pop crooning abilities of one Paul McCartney. GreAt point. Thanks for stopping.