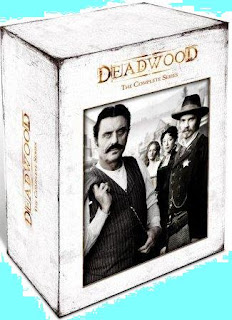 I briefly interrupt this science fiction program to bring you Deadwood.

It's the frontier of lawless 1876 Deadwood, South Dakota. My quest to unearth all things Ian McShane continues with the phenomenal HBO series Deadwood. The series is the work of Creator, Producer and Writer David Milch. It's also history brought to cinematic life capturing the many vibrant, wonderful characters that populated the Old West. Picking a series of clips is near impossible, because it's quite simply an hour long orgy of gritty fun. Swearing aside, and there's plenty of vile, foul-mouthed language, there's a cadence and poetry that runs through the dialogue between characters that seemingly rolls off the tongue. It's easy to see why fans clamored for a fourth season after being axed from the production schedule after just three seasons of what amounts to television sex. The production costs had to be high and if viewership was low, it was a recipe for cancellation. It's an amazing production and one that transports you back to the 1800s and the wild, wild west centered around the seedy, slimy town of unchecked hedonism and whores known as Deadwood. Unchecked by the federal law that is, because a man like Al Swearengen, performed with delicious manipulation by Ian McShane, does his damndest to keep his finger on the pulse and operations of the town's happenings to maintain control and power.
*
Note the intimidating power and domination shot. 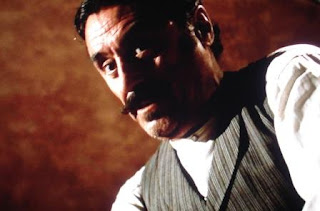 There are so many highlights in the series from production to script to the cast of professionals that light up the screen with their performances it's difficult to choose. I've decided to refrain from a verbose entry opting instead to simply let the Ian McShane highlights speak for themselves as he plays opposite one of the finest ensemble casts to grace the screen.
*
Be forewarned these clips are not for the virgin of ear. The "F" word populates the series three seasons roughly 3,000 times. This doesn't include other popular favorites like - "Cocksucker!" 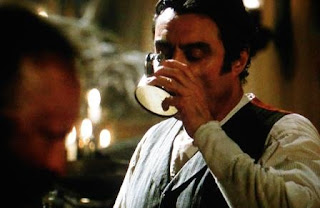 Ian McShane plays businessman ["I've got an operation to consider here"], dope dealer, brothel owner and all around crimeboss Al Swearengen and he is a hard man to put it mildly, brutal to be blunt, a stone cold killer point of fact that you hate to love, but you do. He is the orchestrator and puppetmaster behind Deadwood's many plots and schemes pulling many of the strings, a puppet master of a sort. He rules perched on the balcony of his Gem Saloon. Through these wonderful sequences starring Ian McShane you will find he plays opposite a number of other stunning performances by an ensemble of fine actors. 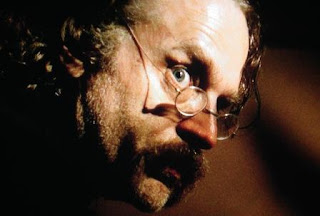 Other such notable actors anchoring the ensemble include Brad Dourif as Doc Cochran. You can take a peak here at his splendid guest performance on Babylon 5, Season Three, Episode 4, Passing Through Gethsemane. Deadwood is filled with genuine characters giving this underbelly of lawlessness a real portrait of life in the by gone West.
*
If there was ever a depiction of hell on Earth, it might have been Deadwood, South Dakota in the 1800s. It's certainly one possibility. Milch creates a seamless blend of fact and fiction, pleasure and pain, hardship and kindness. We've come a long way and Deadwood is a frightening reminder of just how harsh times were once upon a time in America. Deadwood nails its period depiction outside the bounds of governed society without missing a beat. In the end, the viewer is thankful they are transported to this godforsaken place and can just as quickly retire to luxury of refrigerated food and a toilet with in-home plumbing.
*
Deadwood: A
Writer: David Milch
Director: Walter Hill
*
Writer footnote: David Milch is best known for his work as co-creator, writer and executive producer on the classic NYPD Blue [1993-2005] spearheaded by Actor Dennis Franz as Dennis Sipowicz for all twelve seasons of the series.
*
Director footnote: Walter Hill brings his gritty sensibilities appropriately to the recreation of time and space in the pilot for Deadwood. Hill is best recalled for his work on Alien and Aliens. He directed The Warriors [1979], 48 Hrs. [1982] and Trespass [1992] to name a few classics. Ironically, nearly a decade earlier than Deadwood, Hill directed Wild Bill [1995] surrounding the final days of Wild Bill Hickok starring Actor Jeff Bridges. Keith Carradine, who plays Hickock in Deadwood, actually starred in the Hill film as Buffalo Bill Cody. Diane Lane, Christina Applegate, James Remar, Ellen Barkin, John Hurt and David Arquette were among the cast members for that maligned feature film.
*
Timothy Olyphant is a revelation with his breakout role as Seth Bullock. 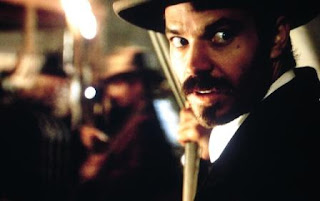 You really did go off the beaten path with this mini-review of Deadwood, Sci-fi Fanatic. I watched the first season of Deadwood when it ran on HBO. I too am an Ian McShane fan, but I absolutedly dispised his character Al Swearengen, which took some of the enjoyment out of show for me. Deadwood, which at its start, is a town run by crimanals,is so dark, dirty and filled with vile human beings that I just couldn't continue to watch it. For me, good fiction depends on conflict and good conflict is best when it is between oposing viewpoints. Deadwood seemed to me to be a Western Godfather - a show about feuding gangsters - and I've never been a fan of stories with a criminal centric veiwpoint.

Speaking of westerns: the new Jonah Hex movie looks good; although having read many of the comics, I don't remember Hex having any supernatural powers, as is hinted at in the trailer.

Boy is it ever that! "Criminal centric." BUT, characters like Seth Bullock lend a bit of balance, though it's too early for me to say how much I will love it going forward. It's certainly not my normal schtick, but it's good to open it up once in a while.

I like the work I've seen so far, but I certainly don't discount your very valid critique of the show. It is a mildly sick show and I'm not sure I should be enjoying it that much. : )

It was very cool for you to feature Deadwood here -- even though it's a western and not "our genre" so-to-speak.

I have to admit, I also absolutely loved this show from start to finish. My goodness...the language. The language alone made the show appointment television every week. It was just....fascinating.

I agree with your comment too that Deadwood is "mildly sick" yet also incredibly (and somewhat inexplicably...) enjoyable.

Great review. I'll be curious to see how you enjoy the rest of the series...

Shoot! [pun intended] But I know you've been busy. Still, glad to have you back and certainly enjoy your input as always.

Yes, it's nice to step out of the proverbial comfort zone for something entirely uncomfortable, but enjoyable [as you put it].

I'm juggling a bit between Farscape and Deadwood at the moment.