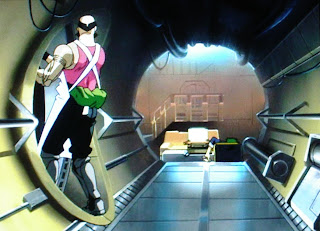 I love these internal, lived-in shots of the BeBop. 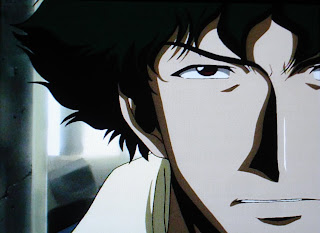 We kick things off with just four episodes to go. Scratch is an outfit, complete with a website making every effort to will, brainwash or convince people to shed their physical bodies to release their souls. Free the body from desire. "Awaken your soul. Rid yourself of that filthy human body now." This is essentially philosophical concepts warped into crazy talk by the disciples of Scratch. Welcome to the insane universe of Cowboy Bebop, Session #23, Brain Scratch. 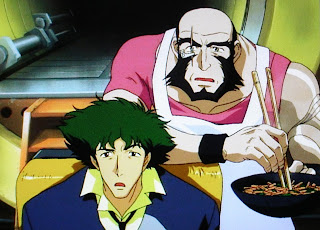 Scratch wants to lead you to the "infinite sea of electrons." Oh, I bet. Do you get a cup of Kool Aid with that? We're getting a bit more insight into the I.S.S.P. throughout the series. The agency is investigating the highest ranking members of the Scratch organization. The news reports suicides are on the rise. An interview is granted by a professor who is there to refute the nonsense expounded by the outfit's leader. The leader's name is Dr. Londes. He's a rather stoic, bizarre-looking fellow. Scratch offers devices that will scan brainwaves into a computer allowing the spirit to move freely from the body. Uh-huh. Some of the final TV images indicate Scratch has many followers including none other than Faye Valentine. Huh? Spike and Jet look upon the TV from the BeBop with a touch of shock and awe.
I love Faye. She is definitely a hot ticket. 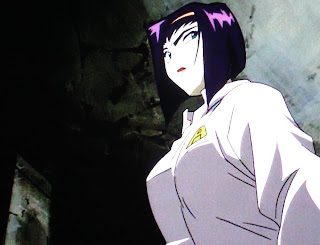 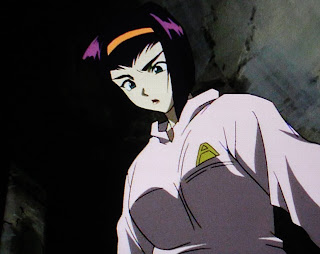 Londes is wanted for murder and a bounty is on his head. He was formerly a research and development neuropsychologist who received a call from God. Next thing you know he started his own project attempting to scan the human spirit or brain waves into digital data. He is founder of the "migrate to electronics movement" called Scratch. The religious cult wants to download the human being into electronic data, a pure form of the soul. There are some genuine lunatics out there. There really are. Spike thinks anyone believes it is essentially nuts. Folks are committing suicide in Scratch's name. Jet has his sights set on Londes. This is all, to quote Jamiroquai, Virtual Insanity. Folks, I'm doing my best to keep up with all of this. 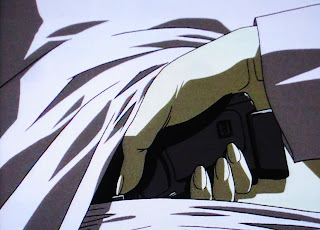 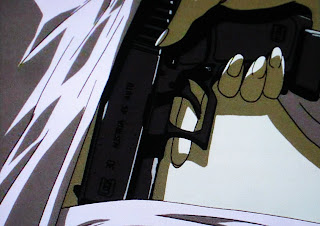 On a planet below, Faye, complete with gun, is on the move. It's becoming clear to me Faye has signed up with Scratch for the purposes of infiltrating the group to get her bounty. In the abandoned warehouse TV screens light up across the rubble. As Faye turns to exit, her vision goes blurry. 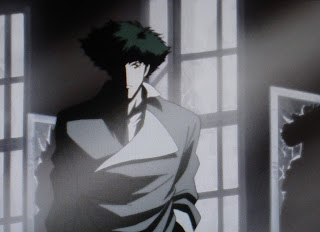 Elsewhere Jet is making his move while Ed is aboard the BeBop hacking for Londes. Spike is pounding the pavement talking to all the local lunatics who follow Londes mindlessly. Jet turns to one of his very old former colleagues, but he just falls asleep. On popular Tv show Big Shots we find Dr. Londes is 95 years of age. I'm beginning to suspect Londes is dead, but we'll see, especially based upon the strange image of Londes that always makes the airwaves.
Spike, Jet and Ed connect and turn up nothing but dead ends. Faye Faye checks in via computer. Things don't look good for her. 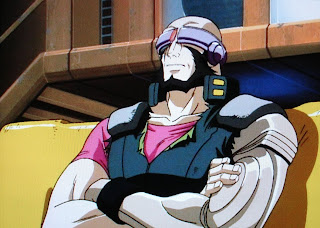 Later, returning to the planet, Jet gets in line to purchase one of those Brain Dream consoles. Back at the BeBop Jet looks to scan his brain into the game with Ed's help of course. Even Ein growls at the crazy talk spouted by Londes and the Brain Scratch thinktank. Dogs are smart. 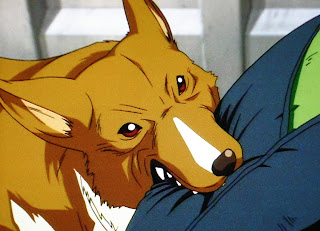 Jet is snapped out of his paralysis thanks to a dog bite compliments of Ein. Jet now understands the mental paralysis happens very quickly. Jet and Ed continue hacking away in the hopes of learning more. Jet discovers Londes never existed. I was close. Londes was a fabrication. All records are elaborately constructed. All the info points to Alles Valley Hospice. Jet and Ed go undercover as a father daughter team. 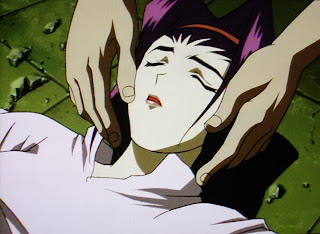 Spike is on his search for Faye and finds her laying unconscious in a building full of televisions. The face of Londes appears and indicates Faye is in a deep sleep. With the area littered with sleeping bodies, the disembodied voice of Londes informs Spike the other bounty hunters "slept to death." Nice. Comforting. 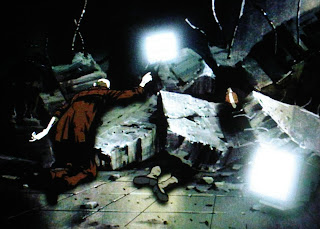 Meanwhile, Ed and Jet enter the hospice in costume. The guard on duty calls Ed an unusual looking child. "Is she a girl?" he asks. Jet delivers a beauty. "Actually, it's a long, very dramatic story." That's for sure. By the end of this sad tale of woe, Jet has the guard in tears and he relents telling Jet to go ahead inside the hospice.
Here's some food for thought from the writers of Cowboy BeBop. 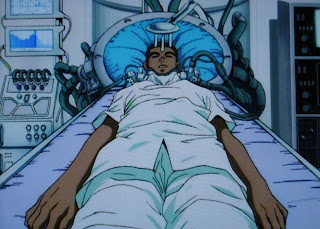 Jet and Ed go into the hospice to find Londes laying in a bed. Londes, of course, isn't really Londes so much as a young man. 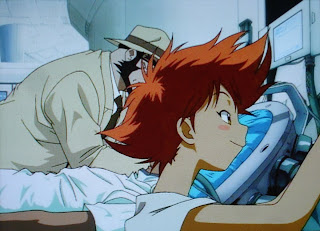 The voice of Londes speaks to Spike about television and how it controls people and their ability to think freely. Let's see, kind of like you're controlling people Londes. The tiny electronic dots of light begin to penetrate Spike's mind as things start to get blurry. Spike fires his gun randomly at the screens shattering several. Spike questions this reality set forth by the voice of Londes. Spike questions and raises the ire of Londes. Elsewhere, Jet and Ein hack into the system at its source within the hospice. The voice of Londes is disabled. It was actually the work of a former hacker named Rosny Spanngen. The boy lies comatose hooked up to equipment. He became a vegetable following a medical accident at the age of thirteen. 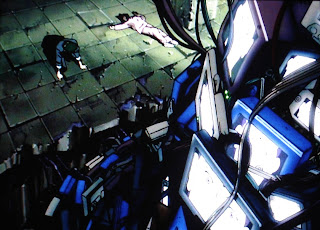 Faye awakens. Spike smokes. "It was all a kid's dream. I guess all he could do was dream so the dreams turned dark." Ed wishes sweet dreams for the boy as she looks back at the hospital. Jet puts his cuffs on the boy now overtaken by a dark spirit. The crew of the BeBop appears to be getting along better than ever. Some of the distrust and bickering has given way to a sense of fondness for one another. 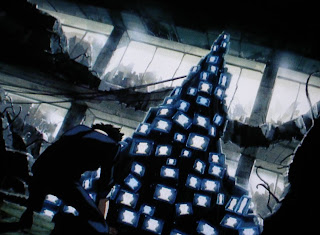 It began in Session #22, Cowboy Junk, and even reared its pleasant head in Session #20, Pierrot Le Fou, so things are looking up. Things are starting to come together for this merry, wandering band of rogues. They have so much in common with castaways on Firefly. The crew is even eating better. I noticed some beef and bell peppers in the mix. I feel as though Cowboy Bebop has the kind of chemistry and quirky concepts combined with terrific animation that might have gotten better and better had it been a bit more like serialized television. Couldn't you see a Season Two or Three improving upon these foundations? Just thinking. 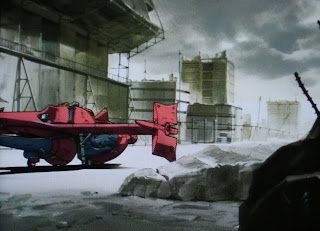 Brain Scratch is clearly intended to be a [wink wink] heady work. The creators really do have the best intentions in their designs. There's so much about Cowboy Bebop that lends itself to film from techniques like flashback, non-linear storytelling, muted film noir colors. The series employs all kinds of terrific ideas including the art of the close-up. Upon further reflection I do believe this was a complicated episode and one the writers and artists delivered to fairly good effect. It was ambitious. 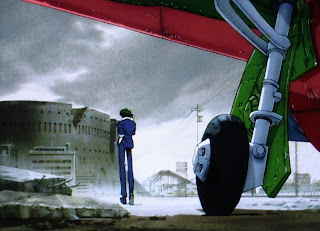 Still, in the end, despite its ambitions I think we don't learn enough about the boy to care. He obviously found a way to remain alive and advocated as a proponent of life without a physical body. Was it revenge which drove his creation? Was it something more? We never really know or find out. Perhaps we don't need to know, but the result is not really all that satisfying. It was an interesting episode conceptually and like the title suggests, certainly offers a good bit of brain food. Still, it wasn't terribly exciting. Scratching head while off to bed.
Brain Scratch: C+
Posted by SFF at 8:00 PM