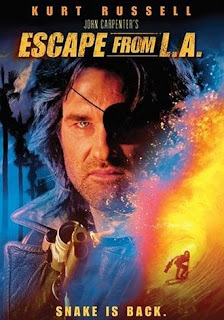 The whole thing is undeniably an exaggeration of the classic right up to and including the surfing by Russell which looks alot better through the marketing of this box cover.

Sadly, EFLA is more than a day late and a few dollars short. It's just crap. Kurt Russell is a bit long in the tooth, but he still kicks ass and he's not the problem. By the way, I love Kurt Russell, but the film is all retread, no originality, dumb ass dumb dialogue and completely ridiculous. John Carpenter's ability to turn out quality films had essentially dried up at this point. He clearly opted to reach back into his well of classics to try and get the creative juices flowing and get the gears turning again, but it winds up a waste of time and a poor carbon copy of his own original. You know things aren't going well for your viewing experience when you're fast forwarding at 1.5 speed and listening to dialogue that sounds just shy of the chipmunks things. I would have loved to have my time back.
This is the classic! 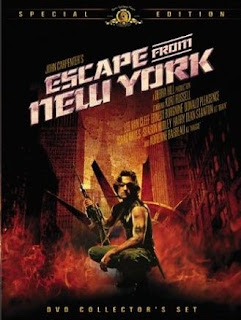 I'd like to say this is a bit of mindless fun, but alas I cannot in good conscience. There are some gladiator-like moments reminiscent of Mad Max: Beyond Thunderdome, but American-style with a basketball. There's also this classic California surfing moment that is just crazy ass laughable. I mean this thing is bad, but not in a good way. When I say bad, I mean what the word means. Where Director George Miller's sequel The Road Warrior continued his extraordinary apocalyptic vision, EFLA just drops the bomb on itself.

It's like Surfin' USA here. Dig that groovy music. Behold and witness for yourself just how much is asked of you to suspend your belief beyond all reason. And what the hell was Peter Fonda thinking?

*
I was hoping for some of the classic feel of EFNY, but instead I got what I expected. The original EFNY was gritty and with minimal effects made for a low-budget thriller. The special effects here are just atrocious. There is a sense of deja vu and that's where it ends. There is nothing similiar to EFNY about this thing. It is sorely lacking on every level.
*
Not that anyone would be crazy enough like me to seek this one out, but avoid it just the same. Fortunately a friend loaned it to me. Some friend eh? If you haven't seen John Carpenter's Escape From New York you're missing out. It ranks up there with John Carpenter's The Thing and John Carpenter's The Fog and any number of Carpenter's classics. John Carpenter's name is often used at the beginning of the film's title and he deserves the credit. He deserves the blame here and at least he owns it.

There is an age old lesson to be learned from the film. Always turn the other cheek on those that try to start something. Walk away from those who try to make you stay for a fight. Never start the fight, but always finish the fight. When that fails and you continue to be pursued implement the Snake Plissken Rule.

Yup, that's Snake Plissken and that's how he rolls (along with riding the giants).
*
John Carpenter's Escape From L.A.: D [for dumb]
Posted by SFF at 8:29 AM