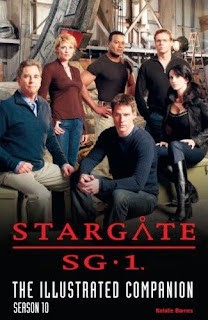 Most people, outside of science fiction fans like ourselves, would hardly qualify the Stargate SG-1 The Illustrated Companion books as books or at least proper reading. My wife generally scoffs at me and qualifies it as “drivel.” Of course reading something from the book of the month club clearly qualifies as more substantive reading [but I don’t see it]. I subscribe to my gram’s philosophy about reading. “READ, it doesn’t matter what you read, as long as you're reading.” She should know she reads daily and she’s like Harry Truman at 90. Self-read, self-educated and just too damn smart for her own good. She's a doll.

For me, the companion books are a blast to read. I love getting the behind the scenes insights to one of my favorite shows. Titan Books is the publisher behind these fine installments. It’s the same company who issues the bi-monthly magazines for Stargate SG-1 Atlantis, Star Trek, Lost, Smallville, Heroes, Torchwood and a whole host of others. The companion guides offer delicious straightforward analysis.
The books aren't perfect and there are a few minor shortcomings, especially Seasons 1-8 where four books shared two seasons each. Two pages were dedicated to each episode and sometimes the insights were few and far between considering black & white photos also populate the pages. For example, I had really hoped to see something about Dan Castellaneta’s performance discussed for the Citizen Joe entry. There was nothing. I’m not a fan of The Simpsons, but he's the voice behind Homer and the episode in which he appears on Stargate is splendid. The inside joke being, of course, that Richard Dean Anderson’s character Colonel Jack O’Neill is a huge fanboy of the The Simpsons. So when Castellaneta appeared on the show it was a win win for the Stargate cast and crew and for fans that were paying attention. In the companion book, there isn’t the slightest bit of background info mentioned about this episode’s production. It's a minor gripe but some of the episodes really skim the surface. Having said that, they're a breeze to read and good fun.

The release of Stargate SG-1: The Illustrated Companion Season 9 and the latest Season 10 are nice improvements over the previous editions. We finally have two books solely dedicated to each entire season. The books are the same thickness as previous works except each episode is granted 4 pages rather than two. Therein lies the difference. With that space there are two illustrations per episode rather than the previous one. All editions include actor interviews, make-up, visual effects, stunts and the last two installments include color photos and a terrific feature called In Depth further analyzing one of the season’s episodes at length. Season 9 looks closely at Ripple Effect [the twinning episode with 17 Amanda Tappings- okay a fanboy’s dream and finally a reason for cloning].

Director Peter DeLuise reflects on the show’s credentials with Ben Browder on page 91 of Season 9 and makes an excellent point about Browder’s talent in filling Richard Dean Anderson’s shoes. It’s one many will take for granted because he is so good and he has to be for the show to succeed for the final two years.
Season 10 is much like Season 9 in scope and depth. There is a splendid 8 page section, In Depth: 200 covering, you guessed it, the 200th episode of the show. It's also an amazing episode for many reasons which are looked at up close here including the nod to shows like Thunderbirds. There is a gobsmacking 32 page full color section to fawn over along with all of the amazing interviews and candid black and white shots.
I'm a little curious as to why the books moved away from Thomasina Gibson of the first eight seasons opting instead for Sharon Gosling for Season 9 and Gosling with Natalie Barnes for Season 10. All the books are certainly commendable.