Stargate SG-1: The Ark Of Truth 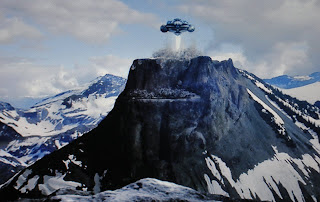 I decided to step away from Babylon 5 for an entry just to look through these new Narn-enlightened eyes if you will.

I finally took time out to watch the direct-to-DVD film centered on SG-1, Stargate: The Ark Of Truth. It seemed like a good time to do it with the official break between Season Two and Season Three of Babylon 5. Let's just say it was an interesting viewing experience.

Fargate is back! This time we hunting weplicators! 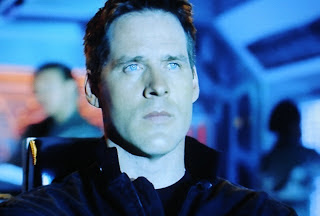 I definitely enjoyed the film, but I must admit I didn't find it as compelling, engaging or as complex as those interpersonal alien/human relationships found in J. Michael Straczynski's epic drama. Sure, the special effects team does outstanding work here on The Ark Of Truth to be sure. Production values are clearly high. The acting is very good and the story centered upon wrapping up the ORI threat/ thread from Stargate SG-1 Season Nine and Season Ten, was also good. All in all, it felt like a bigger budgeted episode of the series. There was nothing truly revealing about it that caused me much pause. I went through the motions to see it through and the execution of the storyline was certainly exceptional as only Robert Cooper can do it. I loved certain action sequences, but I just felt myself yearning to get back to Babylon 5 nailbiting tale. I fully understand they are two different beasts and I'll always enjoy SG-1. It's kind of like a first love, but Babylon 5 truly astounds me at the moment. M! You kind of nailed it for me on a recent post. Part of the major allure for me to Babylon 5 is the three dimensional qualities of its characters. Thinking about it, they are far more complex than SG-1 whereby I think the changes are much much more subtle and slower to develop on that show. I also enjoy the downbeat vibe of Babylon 5. On SG-1, sure there are loads of loose ends [one of the great aspects of the show] that carry on from season to season and things don't always end well, but it is considerably more upbeat. Babylon 5 things don't end well ... often. 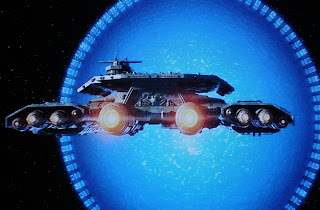 Anyway, that aside, I will get on with my overall impression of Stargate SG-1's The Ark Of Truth. Like I said, I liked it. It was solid, but it really didn't cover alot of new ground. In fact, it really works well as a final episode to Season Ten as it should to round out the ORI storyline. The effects were outstanding as one might expect on this decent direct-to-DVD budget.
First, why is it Michael Shanks gets to be introduced in the credits as "and Michael Shanks as Daniel Jackson?" I suppose he's the fan favorite and I like him just fine, but Amanda Tapping deserves an "and" as much as anybody. Personally, Browder and Black, while not on the show for the eight years prior [no pun intended], and introduced in Seasons Nine and Ten, are equally worthy of an "and." Oh well, egos I suppose, but I'm sure Shanks had a number of expectations if he was to return following his omission from Season Six. He had the weight of a sizeable fanbase clamoring for his rearrival. 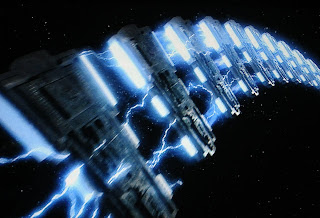 As it turns out The Ark Of Truth is still very much in the ORI galaxy and the film is loaded with bits of fine action and some good exposition. There was a particularly good scene between Tomin, no longer with the ORI, and Teal'c that was quite moving. Tomin has returned with SG-1 to Cheyenne Mountain now fully aware of the ORI as "false gods" as the Jaffa would say. The IOA puts their fingers in the mix via an agent named Marrick.

Marrick joins SG-1 in the aptly dubbed vessel the Odyssey to traverse the ORI galaxy on their own odyssey.
"Say hello to my little friend!" 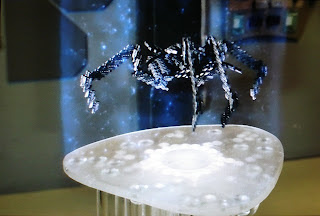 Teal'c, Daniel Jackson and Vala are down on the planet searching for the ark. Meanwhile, Marrick has unleashed his little back-up plan to destroy the ORI unbeknownst to Lt. Col. Cameron Mitchell or Lt Col. Samantha Carter. The replicators have been programmed as ZAT gun-resistant. It's like a damn antibiotic-resistant Staph infection. There's a code to disable the replicators but only Marrick knows it. Carter begins to lose control of the ship while Mitchell battles a now transformed replicator-type Marrick. ORI motherships have arrived and are poundng the Odyssey's defenses. There is a three-front battle being waged here and it is exciting.
I have a little remedy for that backache! 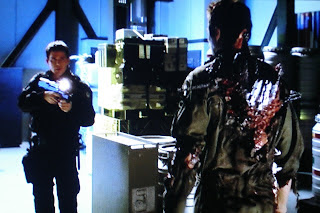 Teal'c is shot, but struggles as only Teal'c can. He even receives a touch of help from ascended being Morgan Le Fay. Mitchell has found the replicator queen but continues his battle with Marrick. Daniel Jackson, Tomin and Vala are captured by the ORI and brought before the Doci [Julian Sands doesn't have to do much; he just looks cool] and then a fiery ascended Adria. Very cool effects thanks to Michelle Comens and her effects team. 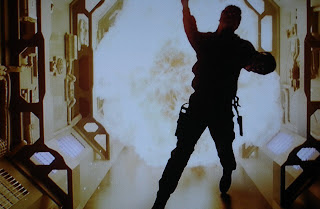 Once again SG-1 prevails as Jackson unlocks the Ark's code and the Doci absorbs the truth, which is linked to all the priors in the ORI galaxy. Adria is weakened and Morgan Le Fay takes her out. Carter is informed of the code after Mitchell gets it from Marrick and those pesky replicators are wiped out. By the way, Samantha Carter is still pretty hot! It's going to be tough to see her go brunette for Sanctuary and I like brunettes. 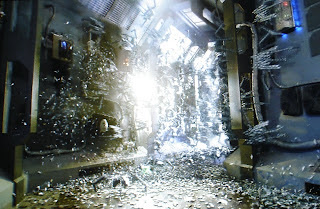 Claudia "I look like crap" Black is always a sensation. The steely resolve of Christopher Judge is always the workhorse. Ben, 'the consummate professional, action hero' Browder never ceases to amaze. Daniel Jackson has fully transformed himself over ten years into a worthy leading man.
The Ark Of Truth is a solid conclusion, but not quite as good as Babylon 5 Season Two.
The Ark Of Truth cast:
Now, where's Richard Dean Anderson when you need him? He'll definitely get an 'and.'

I always knew Morena Baccarin was a flamin' red hottie! 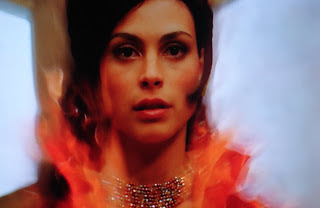 Just Perfect...
I really like Stargate... It's a very good story...
I also like Star Wars...
There is my internet site : http://kevinszone.tk

Thanks for stopping by. I'll bookmark the site. Take care.