Stepping Through The Stargate

Folks. When I'm not busy running around like a chicken with my head cut off over family or work I like to read a good textbook full of geekspeak. This is essentially a book review. Some of you may have checked out Finding Serenity by Jane Espenson, a beautiful book based upon the Firefly verse [that review for another day] published by Benbella. This one, also by Benbella, is Stepping Through The Stargate: Science, Archaeology and the Military in Stargate SG-1, a collection of essays edited by P.N. Elrod and Roxanne Conrad. It's not entirely cohesive from start to finish, but it's a load of fun on the whole. 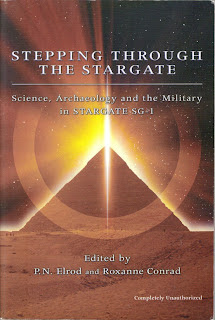 Back when I first launched this blog I mentioned comparing Star Trek to Stargate and I'm going to take the opportunity to highlight one of the articles in this book that hilariously compares the two. The piece, Stargate Trek, is by by none other than sci-fi writer David Gerrold the man behind Star Trek's 1967 episode The Trouble With Tribbles. His observations are spot on and he should know. Gerrold puts it like this, "when you talk about science fiction on television, there's Star Trek- and then there's everything else. And that's unfortunate because a lot of the 'everything else' is pretty damn good- oftentimes even better than Star Trek. Case in point: Stargate SG-1". I'm not arguing because Gerrold should know. To be clear, I'm a bigger fan of Stargate SG-1, but I love the Star Trek universe almost as much. It's just a far less rabid, obsessive kind of addiction. Gerrold goes on to look at how closely tied the two programs are as sci-fi formulas go, in many ways identical, but points out distinct differences that make the shows unique pointing to SG-1's success in breaking away from the pack of the 'everything else' in establishing its own mythos and cannon.

Now I'm offering you the condensed digest version. You really need to read the article for all the dirty details and it's a bang up piece. There's plenty I've left out. But the crux of it being if Star Trek wrote the formula so many programs aspire to be, Stargate SG-1 has transcended that formula to create its own identity. Stargate SG-1 may be the first to child to step out from its parents' shadows. Where there was one franchise now there are two. 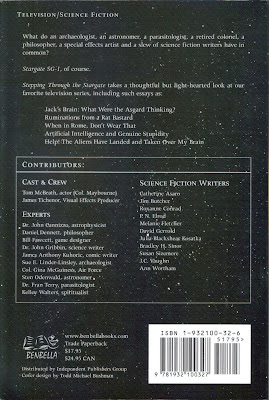 The articles in Stepping Through The Stargate [the best ones are in BOLD]:

The book entertainingly breaks down a phenomenal series with a massive mythology. It mostly succeeds taken as a whole and it's a fun ride. This is clearly for the Gatecon set.

The book is well worth seeking out and Amazon may be your best shot. Good luck cowboys!
Posted by SFF at 12:03 PM

I will have to look this up, I am not as big a SG fan, I irrationally hated it due to Farscape's cancellation and stopped watching the Sly Lie channel for years...then I had a baby, that didn't sleep, and there was Star Gate and it was good. What are your thoughts on Star Trek vs. Farscape? I think there are a lot of similarities in the type of humor that SG and Farscape have. I too think that Trek takes itself a little too seriously, but the idea that there is a utopia if we just work hard enough is a nice one, besides Deep Space 9 was my favorite, not your “typical Trek”.

Interesting,Deep Space 9 huh? I still have to watch that one straight thru but everything I hear makes it sound like that one is the black sheep of the family right. I look forward to checking it out. I will write more on Farscape later so stay tuned. But, yeah the shoot from the hip humor between SG-1 and Farscape is absolutely what makes those 2 refreshing and exactly why Claudia Black and Ben Browder fit in nicely. But yeah, the Farscape cancellation was not good at all. Very Very disappointing. Thanks for writing.