So the question is, what do you get when you cross Party Of Five's Jeremy London [now known as Jason London] with Farscape's Gigi Edgley? The answer: Bad Science Fiction in the form of your latest Sci Fi Channel movie. Maybe even NO Science in your Fiction movie.
As I stumbled through the house taking care of dishes and other assorted odds and ends I essentially watched Sci Fi Channel's latest doozy of a film, Showdown At Area 51. You're probably saying to yourself, 'damn I missed that one' or 'shoot! I meant to watch that!' or 'huh?'. I'm hear to tell ya, -ya didn't miss much!
I mean, don't get me wrong Gigi is near damn the cutest, hottest, little sex kitten you'll ever see, but she's wasted here. London is always cool enough to watch, but again, there isn't a believable word of dialogue in the 2 hour script.
From the always, spare no expense special effects of Sci Fi Channel's movies and the initial crash landing of the spaceship [at least I think that's what that grey block of CGI was that smoked up the screen in the forest- is that Vancouver again?] to the silly plotlines, Showdown At Area 51 is just plain laughable.
Two aliens go head to head over the Omega Seed [don't ask- it merely drives the plot to this unbearable freakfest] and one scene pays goofy homage to the old Spaghetti Westerns or maybe The Good, The Bad And The Ugly. There's one big clunky, chunky alien that is clearly invincible. It's impervious to a hail of gunfire and rocket launchers. It does yield some nifty effects at times, but it's clear the folks with the guns need a better plan and it never comes. The other alien sports some goofy tattoos that basically let us know- yup! he's an alien. But like just about any Sci Fi Channel film, we never care about the characters and gleefully look forward to their inevitable deaths amidst dodgy special effects and terrible scripting. Then it's on to next week's film...
Clearly Showdown At Area 51 is great, like Alien Lockdown and other assorted Sci Fi cheese is great from our favorite channel. It's great when you are completely wiped out and you have no strength left to get up and leave the room. Perhaps you are so weak you can't even lift your fingers to change the channel. Or it's a train wreck and you can't take your eyes off 'em.
Having said all that, I love the channel for giving us some of the best in Sci Fi. Stargate Atlantis, Doctor Who and SG-1 are simply amazing and Atlantis just keeps getting bigger, badder and better.

Hey look there in the water, it's Don S. Davis and Paul McGillion from SG-1 and Atlantis and they're in the latest movie, Beyond Loch Ness [Jan 5, 2008]. 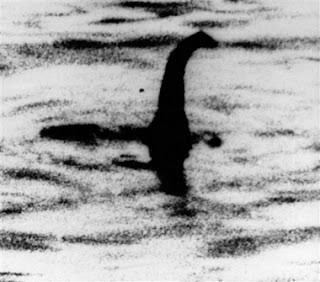 Folks, remember that old loch ness photo, yeah don't hold your breath and don't expect much with the movie either, but I'll be watching. I've always wanted to see the Loch Ness in bad CGI. I'll even try and get a photo of it!
Posted by SFF at 10:15 PM