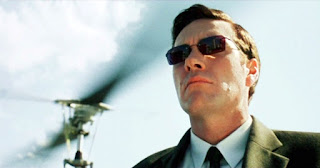 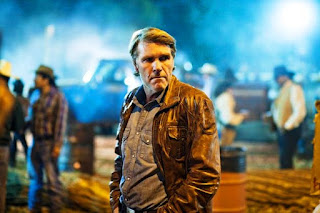 And that sign speaks to the core principles of this extraordinary lead character, a rare throwback to a by gone era of television. Though, the character of Walt Longmire isn't one dimensional. Longmire (2012-present) essentially assembles many of the ingredients that worked in classic mystery and law-based programming and integrates the depth and multi-dimensionality of today's television allowances. But it is a throwback to the likes of The Rockford Files (1974-1980) or Columbo (1968-1978). It's not the same but does capture the spirit of those classic dramas.

It's a rare thing for me to actually take time to write about a series that isn't science fiction, but the exceptional Longmire, based on the writing of Craig Johnson, is one of those exceptions to the rule.

What do you expect when a sensational, mystery-steeped, old-fashioned crime procedural with Western-styled trimmings set against a Wyoming backdrop (but filmed in various locations) just happens to also be a kind of science fiction odyssey?

Okay not really, but with this cast, one thing you might not expect is for the series to be a real earthbound, grounded to terra firma treat.

Longmire stars sentient Agent Jones (The Matrix), Kara Thrace "Starbuck" (Battlestar Galactica), Colonel David Telford (Stargate Universe) band even features appearances  by Alien 3's Dillon and Mimic's Leonard. Taken on the whole that's a fairly esteemed cast of sci-fi characters compiling one heck of a science fiction super group. Another way to put it, what do you get when The Matrix and Battlestar Galactica collide with Stargate Universe? Apparently a stirring Western-steeped drama called Longmire. 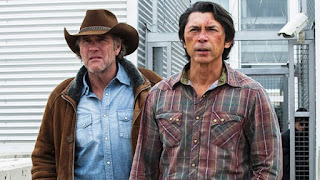 Associations aside Longmire features actor Robert Taylor (The Matrix) in a sterling lead role as Sheriff Walt Longmire. Taylor owns the role of an iconic American law man with honor and integrity and a real obsession for keeping his county clean.

Lou Diamond Phillips plays Henry Standing Bear and is a wonderful counterpoint and friend to Walt. Phillips too is note perfect in his approach to capturing this local character. We'll forgive Bailey Chase for no genre credentials. Oh well. But stay tuned long enough and Graham Greene of Defiance acclaim arrives. Greene portrayed Rafe McCawley in the  ephemeral, underrated sci-fi mini-classic. Finally, the underappreciated Callum Keith Rennie (Battlestar Galactica, Strange World, The X-Files) ups the odyssey quotient with his casting. Katee Sackhoff is not unfamiliar to these incestuous ties. Lee Tergesen, too, would deliver for Longmire and actually follow his role here onto Defiance. I won't talk about Peter Weller (Robocop, Screamers, Leviathan, Naked Lunch, The Strain) or mention the appearance of Gerald McRaney (Jericho). Okay, you get the point.

These kinds of ensembles dream casts come crashing together now and again, but often culminating in terrible results. What amazed me was just how suited and natural these sci-fi veterans were in their respective roles. How ironic this outstanding Longmire casting coup would do for the Western drama what Western character actors did for science fiction and Star Trek (1966-1969) once upon a time.

William Shatner (Gunsmoke, The Virginian), Leonard Nimoy (Bonanza, The Virginian, Gunsmoke) and DeForest Kelley (The Lone Ranger, Gunsmoke, Bonanza) would trade in six shooters for phasers as James T. Kirk, Spock and Leonard Bones McCoy, one of the great acting triads in television history. Incredible. Who knew we would see a move the other way successfully beginning in 2012. 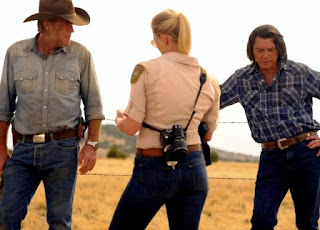 Yet, Longmire is the furthest thing from science fiction and each alum cast for the series, with their performances, brings this series down to believable earth.

But, most of all, Longmire belongs to one man, Robert Taylor---the man who once portrayed sentient Agent Jones, backup to sentient Agent Smith in The Matrix (1999) alongside supporting Agent Brown, played by Paul Goddard (Farscape). It all seems a bit insane really. Australian actor Taylor quite possibly enjoys the role of a lifetime here as Walt Longmire ironically and laconically nailing the part of a tried and true American lawman. Who would have imagined? 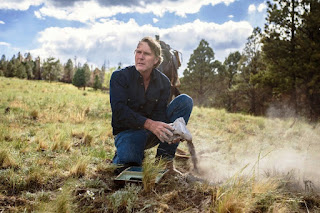 The sturdy Longmire belonged to AandE and despite solid ratings was terminated by the channel after three seasons only to be picked up by Netflix for Season Four and Season Five as of this writing.

Two reasons piqued my interest in Longmire. First, Katee Sackhoff. Second, critical writings for the series were generally very positive and noted the series continued to get stronger with each passing season. As much as I enjoy Sackhoff, the second reason put me over the top in giving Longmire a look. If Season One is any indicator, Longmire is a keeper going forward, because its inaugural first season is solid with credible performances and terrifically shot vistas. Camera work takes its time on small moments and captures close-ups of these moments that further amplify the sense of time and place and who these people are. If Longmire seemed like a longshot, Taylor has delivered a special series in spades. It's like a role he was born to play. 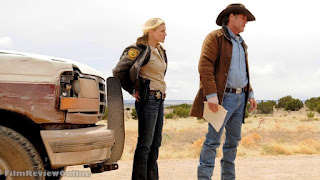 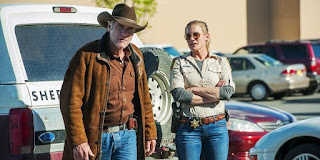 It never ceases to amaze how a seemingly unidentifiable actor, with arguably the smallest role in a landmark film (The Matrix), would one day fill the shoes of an extraordinary lead part. This has got to be operating rule number one for all actors when they take a part, good, bad or terrible, knowing that it may one day lead to that dream role. It's positively boggling.

Longmire walks the delicate line of a formula-based criminal procedural commensurate with any number of longstanding television classics, but it props up the modern stand alone story with mythic Western flair and unexpected diversions. Given the license to push the boundaries of television today Longmire is a fascinating mix of character myth arc and stand alone mystery. 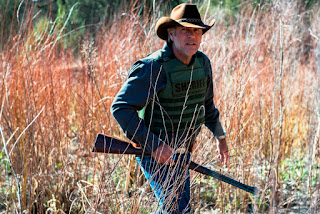 The Longmire series is a bit of a nod to an old school sensibility found in classics like James Garner's work in The Rockford Files or Peter Falk's take on Columbo. Taylor's grizzled performance too harkens back to the likes of Lee Majors (The Six Million Dollar Man) or Clint Eastwood (pick your film) and I'm not overstating it. The likeness can sometimes be uncanny and ultimately refreshing.

Y'all should check it out now. Please and thank you. 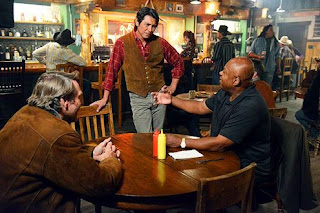 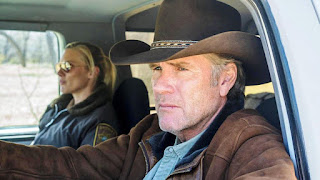 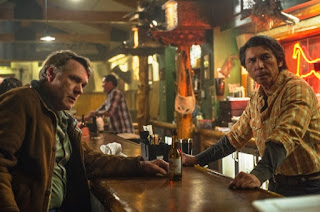 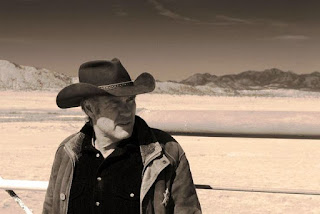 Labels: Before And After, Longmire

YOur post was right about the line it draws, the lead actors, the harkening back to Rockford and Eastwood - and I do like that about it; the absence of new forensic technologies to solve crimes; the setting: the people. But it lacks something.
I guess the soap-opera storylines that keep silly amounts of people watching dramas like NCIS, is largely absent; it doesn't promote an agenda beyond ordinary decency. Half way through series 2, approximately 20-25 dead bodies later and they still haven't had the election for sheriff. The resolution of Longmire's wife's murder...gets mentioned every recap but doesn't move forward.
Such storylines would be squeezed dry in seconds in a juicier show like Banshee, or resolved in a wholesome fashion within a single episode of Walker: Texas Ranger.
So, yes - interesting...to observe critically, but not necessarily to watch.
Problem is I'm likely to watch series 3 to see whether it does get stronger as claimed, and so I'm prepared for when Netflix brings it back.
Am fairly sure I should be using my time better.

J-tea's counterpoints within his comment are completely fair and offer another viewer's perspective on Longmire.

That "something" it lacks is indeed the compelling engagement found in shows like Homeland or Breaking Bad just to offer a few examples. Longmire doesn't quite attain that lofty barometer, at least based upon my viewing of Season One.

Yet, I do enjoy Longmire a great deal.

As you mention, it tends to promote "ordinary decency." I like that. That's quite true and I find that refreshing in an age of television that is missing that component. Some of the subplots get teased a bit. Longmire, as I noted, definitely has a slower pace, more deliberate and for those who enjoy it the characters and performances tend to pull us in and its those performances where Longmire lives. But these unresolved issues like the wife's murder feel more genuine to me, because those events in a life linger. They affect us deeply emotionally for years. Those are storylines in our own lives that are not cleaned up in satisfactory way. They scar us and become part of who we are. It's very subtle but I like those aspects of Longmire too.

I haven't seen Banshee, but I'll have to check into it.

I have indeed read that it grows stronger with time, but admittedly for this writer, Season One was enough to keep me coming back for more. Longmire is a bit like comfort food for me, and that's not to say Longmire just phones it in and wastes my time, but, perhaps unlike J-tea, I do enjoy spending a bit of time on the series and with these characters and with this world of Longmire.

I recommend it, but it won't be for everyone particularly for those looking for storylines that grab you by the throat.

Loved your points here J-tea for others to take away as well.

I like the slow burn of this show and that the showrunners take the time to let the characters' recurring storylines breathe like fine wine over time. In the process you get to know and care about them, even the ones with more dubious motives, but it shows with a deft and delicate touch that even the most nefarious characters have their reasons and motivations.

The entire cast is fantastic and they all bring so much to their respective characters and I also like how the show has developed the interpersonal relationships in a natural way. It is one of the better shows in doing that.

I was drawn to this show because of the presence of Katee Sackhoff and had no idea that Longmire was in THE MATRIX. Mind blown! Well, he is note perfect on this show, bringing a laconic charm that is reflected in the show itself.

It's interesting to see people checking Longmire out for different reasons.

But I completely agree with you J.D. Glad to hear you are watching this series as well. It was a surprise find for me.

Like you, I had no idea about Robert Taylor. Brilliant in the part.

It is a wonderfully developed character piece, as you say, a slow burn of epic quality.

I'm in the Longmire camp.