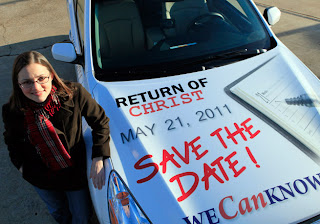 "It all seems so clear to me. Why is it so confusing for others?"

I guess this will be my last post based on all of the concrete scientific evidence floating around out there. It's been real. Yes, it's time for the latest doomsday predictions.
No longer are people referring to the Rapture as a hit song by Blondie from the recording Autoamerican [1980]. 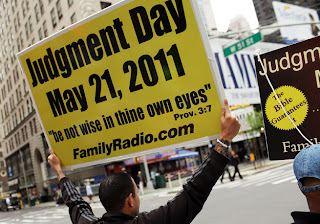 Tomorrow, it's the end of the world as we know it people. May 21, 2011. It's been nice knowing you. Call it a day. "Game over man!" Sayonara. It was a good run.
Have any of these people actually seen Millennium? You're eleven years too late. But seriously, some believe these folks cultists who will be joining the rank and file behind the likes of the Hale-Bopp Comet jumpers. Get your Nikes ready. Others do follow the legitimacy of such predictions found in the Bible. Still others believe, the good book indicates we will not know, so why the predictions? 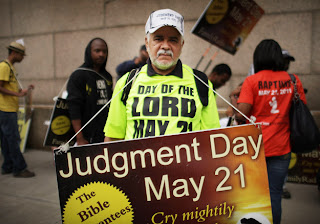 These people always look so perfectly normal too. Well, some look normal. Some look incredibly bored. They need work. Some are dressed to the nines. If it's all coming to an end would you worry about nice clothes and dress like you're heading to Starbucks for a cup o' grande? I'm not so sure. Heck, Ted Bundy and Ted Kaczynski looked pretty ordinary too.
Where does it all go wrong in the wiring? There was no mention of any of this at my local church. The message was fairly positive. The pastor, certainly not Jeremiah Wright, made every effort to have us look within ourselves. What could we do better? How could we be better? No, there was definitely no mention of the end of the world. I'm quite sure of it. Let me think... no, definitely not. 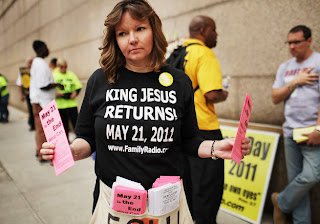 Are there entrepreneurs making money off this thing? If so, isn't that a bit counterproductive and pointless to just giving up? Why make money on such an event unless they know soemthing we don't.
I mean if the end of the world is coming. Who cares? Why let people know? The end is coming. It won't matter anyway. Stay at home and quietly enjoy those final hours with a coffee and your dog.
Listen friends, it's been a real pleasure. We'll see you on the other side. 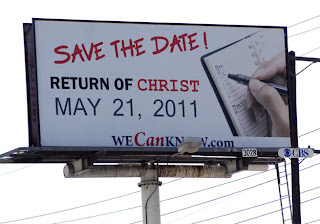 Let's see, what will I do in those final hours? Hmmm. Hug my kids. Pet the dog. Drink a vodka and tonic. Watch another episode of The X-Files. Wow, that's fitting. In fact, if the end of the world doesn't come until real late tomorrow night I might catch several episodes of The X-Files. Fingers crossed I have time left.
And one more thing before we go, the eating and spitting David Sunflower Seeds never quite delivers the "happy" it promises. Still, I plan on buying more next week.
Listen, I expect to be on those baseball fields tomorrow folks doing the good work of the big man. I have much to do. I want to listen The X-Files Volume One Limited Edition 4 CD music set from La La Land Records. I have yet to read Not Bad For A Human. I'm also eager to purchase Stargate Atlantis: The Complete Series on Blu-Ray come July. Hell people, I'm way too young to die damn it!
I do know one thing. I won't be cleaning up those End Of The World signs. Let's face it, not being a believer with concrete dates does have its advantages.
Chances are, if it's Sunday and you are reading this, you're still alive. Congratulations! You are a survivor! We shall regroup at Graceland.
May 26 Update: The End of The World has been moved to October 21, 2011. Have a nice few months.
June 16 Update: The tiny southern French hamlet of Bugarach has drawn scrutiny from a government sect watchdog over droves of visitors who believe it is the only place in the world that will survive a December 21, 2012 Apocalypse when many believe the world will end according to an ancient Mayan prophecy.
So is October 21, 2011 out?
Posted by SFF at 7:09 PM

Your point regarding the Father is my understanding of it, which is why I don't understand how everyone else seems to know.