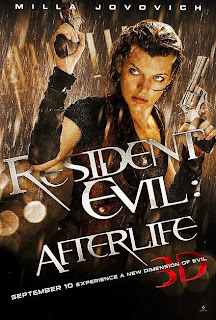 Milla is back! You should think the posters speak for themselves. Nevertheless, critics still keep digging deeper regardless.
*
I have to laugh when I see the swell of negatives rise over at Rotten Tomatoes [RT] concerning the film Resident Evil: Afterlife [2010]. Seriously? Why? Why bother? These critics line up year after year to rip the Resident Evil franchise. As of this writing, 36 Tomato Splats versus 10 Tomatoes combine for a whopping, impressive 22% rating. I'm right there with you Tomato guys. This is bloody Resident Evil people! What do you expect?
*
It's a rather simple equation actually. Straight up, it is Milla Jovovich, as Alice, killing zombies. Simpler: Milla Jovovich + Zombies = Sexy babe killing Zombies. The more complex equation: Milla Jovovich + Zombies + Ali Larter= Two sexy babes killing Zombies. That's it! Throw a few cool creatures in for good measure. You see, I knew math was important. I don't need to see Resident Evil to know it and I'll bet some writers don't see it to review it. Do the critics think they are giving us anything new to chew on regarding the fourth installment in this thriving franchise by ripping on Resident Evil? I should think them smart enough to know better. Their zombie-like trance in savaging the film each arrival is ironic really. Milla is the sexiest damn zombie killer to grace the big screen. Add an irresistible Ali Carter to the mix and it's 3D time!
*
Milla is the draw to the series. She's sexy. She's charismatic. She's all of that while managing to be one of the few beauties to infuse an action hero with unabashed, feminine sex appeal. Angelina Jolie couldn't pull it off in Tomb Raider [2001 & 2003]. Charlize Theron couldn't do it with Aeon Flux [2005]. Kate Beckinsale comes closest with the Underworld series. But Milla Jovovich reigns queen. She carries the weight of the Resident Evil franchise on her tiny Ukrainian shoulders like Atlas shrugging.
* 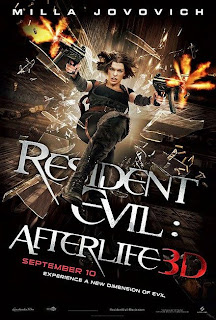 What an awesome defense of the RESIDENT EVIL franchise - easily the most eloquent one I've come across yet. Actually, you'd be surprised how many other fans of this enduring franchise there are out there. I've come across quite a few in the blogosphere strangely enough. And I think it boils down to this: these films don't pretend to be anything other than what they are. Plain and simple. In this respect they are critic proof and this is evident in the box office receipts this film (and the others) are racking up.

I really like these films, esp. EXTINCTION for its ROAD WARRIOR meets zombie vibe. Plus, the addition of Ali Larter was pretty cool. I'm looking forward to checking out this new one.

Thanks JD for the big praise. I appreciate it my friend. Plan on seeing it in a few hours.

Unlike many, I do love each and every installment of the RE franchise. Each is visually unique. Unlike yourself and many others, I'm a pretty big fan of the Escape From New York nod of Apocalypse and that Nemesis project creature was as bad ass as I've seen a creature in a horror/sci-fi actioner in awhile.

Extinction- brilliant. So much light and space that it was so unique to the previous film. I enjoyed it very much.

The original. Classic! If you throw a monster called The Licker in there, you've got my vote.

Oh, and I pretty much dream of Milla.

Sci-Fi Fanatic gets his freak on! Your funny and heartfelt defense of the Resident Evil franchise was a hoot to read. I do check out Rotten Tomatoes for a general consensus of films before I decide on seeing films that I am "borderline" on. However, I never even thought to check out the reviews on Resident Evil: Afterlife because I knew no matter how negative the reviews were, I was going to see it. As a fan of sf, fantasy and horror films, I'm more surprised (and suspicious) when I read a positive review of such films. Horror movies (and Resident Evil's four films are primarily horror films) in particular are regularly savaged by non-genre critics, I assume, because they are predominantly visceral experiences, with less emphasis on character and drama than non-genre films. Fans of these films, "get" these films because they serve to stimulate our imaginations and allow us to escape into a complete fantasy world. For people who don't like sci-fi, fantasy or any of that "weird stuff" in their films, there is no argument that will encourage them to enjoy our beloved genres.

Please check out my updated input on the film itself.

I must tell you that I feel strongly against 3D. I am not a fan. I knew that I had to see this one in 3D because the techniques were used for it. I knew I wanted to experience it one time. It was impressive in spots.

Having said that, I almost feel as though I would enjoy this film as much as 2D experience and I look forward to my Blu-Ray to do just that.

I love technology too, but I don't think I'm going there. I really don't.

In fact, I would love to see this in 2D soon on the big screen, because I'd be happy to see it again and compare.

Thanks again my friend.

Way to go, SFF! You articulated this perfectly. There remains a whole lot of love out there for our girl, Alice. Fans don't attend a Paul W. S. Anderson film for cerebral cinema, do they (hey, didn't I see the return of zombie Dobermans in the trailer?). Now that I have Machete and The Expendables under my belt, I must complete the triumvirate with another RE. It's great, too, that there's growing appreciation out there for SOLDIER and EVENT HORIZON. Thanks for this, SFF.

p.s., I must say that Jolie did acquit herself very well (action and grit-wise) in this summer's SALT. Believe it or not, I saw three films this season that had big spontaneous applause when the end credits arrived: TOY STORY 3, INCEPTION, and SALT.

Hey L13.
I hear ya. Yes, the dogs receive a similar splitting head effect a la The Thing.

Your point is well taken regarding Jolie. I was thinking miore in line with TV/Videogame adaptations, but I still love Milla best. : )

'She carries the weight of the Resident Evil franchise on her tiny Ukrainian shoulders like Atlas shrugging.'

Greatest line. . .ever. THAT should be on Rotten Tomatoes.

Hey man. . .glad to see someone defending the franchise that has, for the most part, been consistent. I can't wait to see the fourth one. To me, 2/3 means a majority and Resident Evil, for the majority of the time, has been good. Even if four sucks, it's 50-50. . .I'll take those odds over the terrible franchises we seem to be getting lately.

But clarify one thing for me. . .I don't think it was reflected in your review: is Milla sexy? ;)

Hey, by the way, email me. I have to ask you about something.

HA! Thank you Will my friend. I kinda thought the line had a nice ring.

Did I mention I loooovve Milla. : )

Hey have you seen ULTRAVIOLET? Milla kicks a lot of ass in that one and is her usual gorgeous-looking self. The film has tons of fantastically staged action sequences. Definitely worth a look if you haven't seen it.

Just so you know, I recently tagged you with a movie meme.

ha! You know. I actually haven't seen ultra Violet. It's in my queue. I believe it's by the Director behind Equilibrium which I enjoyed quite a bit. The fact it has Milla is more than enough. Thanks JD.

Hey, Sci-Fi (and Milla) Fanatic! If you love Milla Jovovich in the RE movies, you will L-O-V-E her in Ultraviolet! Yes, Ultraviolet is directed by Kurt Wimmer who also directed Equilibrium. I think Ultraviolet is an improvement over Equilibrium and not just because it stars Milla Jovovich instead of Christian Bale (though Milla is a darn sight prettier than Mr. Bale). BTW: You can watch Ultaviolet on-line for free at Crackle.com (http://www.crackle.com/c/Ultraviolet/Ultraviolet/2480344). Unlike many free streaming video sites, the image quality is quite good.

Always good to hear from the Freak Doc! Listen my friend, and brace yourself, because I'm going to sound like a true audio visual snob here and I'm sorry for that.

First, thanks for the tip on the download and for the thumbs up on Ultraviolet because you and JD have confirmed that film is for me to see.

But I must buy the Blu-Ray. I need Milla in pristine Blu-Ray. I expend the very best for Milla. : )

Honestly, I love Blu-Ray and I pretty much go that way when I can and I expend those dollars over time so as not to bankrupt myself. It is definitely one I am watching for a price drop! Thanks pal.

What has always baffled me is that critics and reviewers continue to see movies that they KNOW they won't like. I have blog devoted to nothing but awful movies, and even *I* don't bother with movies I know up front I'm going to hate.

There are so many movies released that they have other choices to write about, one would think. Or their editor can find a stringer to assign the review to.

Oh... and as far as the line in that one review that Jovovich was better clothed in this one? I wonder if the reviewer would have written that if he/she had bothered looking through the credits. Eventhough the fashion line is long defunct, Jovovich/Hawk was responsible for making Jovovich's outfits in this film. But that could just be me being judgemental without really bothering to look at the review. Kinda like some of these critics when they supposedly write about films like this.

What a terrific observation and point to make. Thanks Steve.

Ironic you should mention writers going into in to a writing assignment with "an axe to grind," given the latest villain is the Axeman. Perhaps Anderson was saying something when he ensured the fellow wielding the axe was killed. : )

Joking aside, I'm right there with you. I don't waste time with a huge percentage of films because they don't interest me. Romantic comedies generally, Spy Kids, etc..

But if your job as a writer is to analyze a film subject send someone open to the experience at the very least if not a fan and most of all if they are indeed a "hater."

And finally, you're right, these people write very cursory reviews. There is little if no substance to them. There is no genuine insight and therein lies the tragedy of it. I find I get much more out of film analysis from people like yourself and elsewhere right here on the blogosphere. You'd think the media or at least film writers would be worried about their jobs at this point.