"My name is Ergo Proxy.
And I am the agent of death."
-Vincent Law transformed into Ergo Proxy-

Ergo Proxy continues. And it continues very much at its own pace. You could call it something of a slow burn. 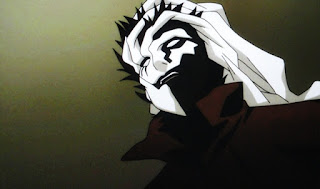 Vincent Law is saved by Kazkis Hauer in the final moments of Ergo Proxy, Episode 8, Shining Sign from Charos. Law and Pino are brought to Asura Dome, referred to as a city of the sun. The story continues in a new location with Ergo Proxy, Episode 9, Angel's Share (Shards Of Brilliance). 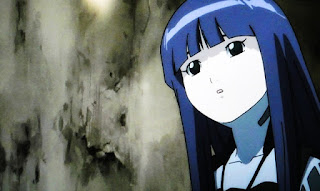 While Ergo Proxy is a fairly well drawn contemporary animation, one birthed in the digital age, its drawings and renderings of characters still sometimes suffer from deficiencies in detail. It is simply lacking at times in the kind of artistry that really grabbed us by the throat at times in the the pre-digital era, the era of hand drawn artistry. It's still generally very good despite its animation shortcomings, but it does err on the side of oversimplifying images due to time and budgetary constraints no doubt. It is indeed economical in telling its tale. 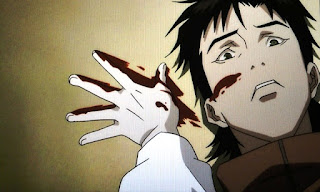 Rescued by the enigmatic Hauer the first portion of the episode centers on a conversation essentially between Vincent and Kazkis. Kazkis makes it clear he had no love for the inhabitants destroyed at Charos where he rescued Law.

Kazkis expresses his love for Senex, the now deceased Proxy who battled the inhabitants of Charos. 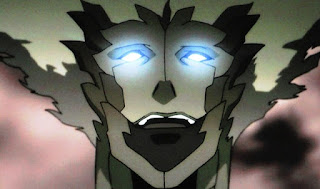 He talks of Charos as the moon and Asura as the sun. The two served as companion towers. The female Senex and Kazkis loved one another and hoped to unite their worlds together suggesting immediately he too is a Proxy.

Kazkis attempts to explain that Vincent Law himself is a Proxy but Law's memory betrays him and he refuses to believe he could become such a thing---that monster. Kazkis realizes Law, having become the monster, has unknowingly killed his beloved Proxy Senex without even knowing he had done so. Law runs away from Kazkis upset with the suggestion and idea he could have killed Senex. Vincent refuses to believe he could be capable of such a horrific act. 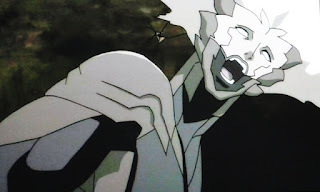 So of course this conflict between Law and Kazkis sets up a showdown for the second act of Angel's Share. 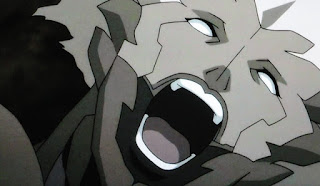 It is learned that Monad Proxy was entrusted with the memories of Ergo Proxy, or what is clearly Vincent Law.

In a fit of rage over the death of Senex Proxy, creator and supervisor of Charos Dome, Kazkis Proxy seeks to destroy Law. Kazkis takes Vincent's gun and turns it against him. Law is shot several times and is left bleeding. 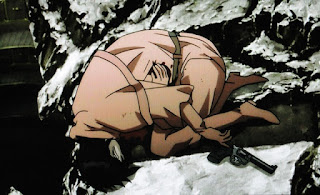 Under attack by the Autoreivs or what Kazkis calls the knights, Vincent is forced to anger and his Hulk, Bixby-like transformation occurs allowing him to become the powerful Ergo Proxy. This is the first occasion, nine episodes into the series, where Vincent is seen visibly undergoing a change before viewers eyes. 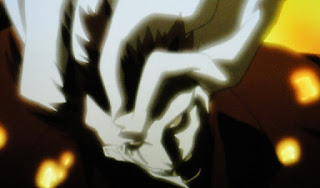 Ultimately Kazkis is killed and reunited spiritually on a plane with Senex.

Much philosophical and ambiguous rambling is muttered by Kazkis as he perishes. Vincent Law returns to human form as his tears flow over the realization of what he actually is. He is Ergo Proxy, the angel of death.

All of this forces Law to question his humanity and whether life is worth living. 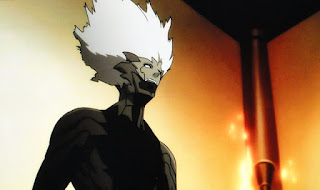 Well, we continue to fly in the dark, reunited with The Rabbit as Pino and Law head to Mosk hopefully to obtain some fucking answers. That would be nice at this point. 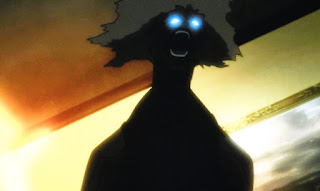 Ergo Proxy while wonderfully dark and brooding undeniably has its share of pacing problems and requires a good bit of patience on the part of the viewer. Personally, mine is wearing thin. The chain is yanked far too much and frustration is setting in. All of this combined with questions to matters hopefully significant and pertinent to narrative coupled with animation that is markedly too simple in terms of overall detail is making Ergo Proxy a bit of a slog at this point. I'm hoping it turns a corner soon. But the creators---of the series not the proxies---are testing me and my resolve to carry on and continue forward. 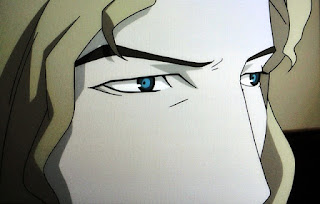 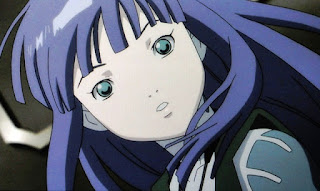 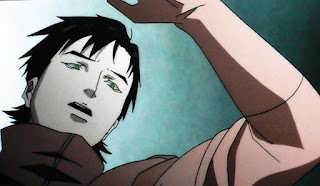 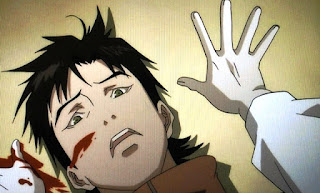 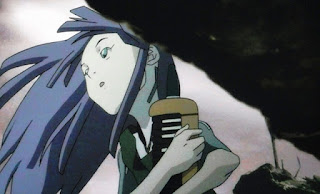 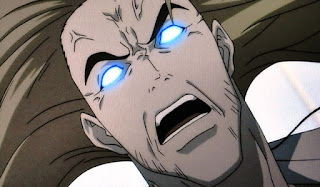 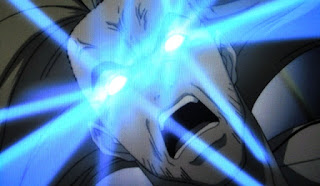 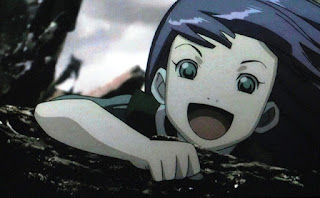 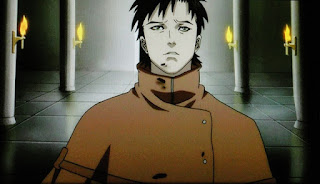 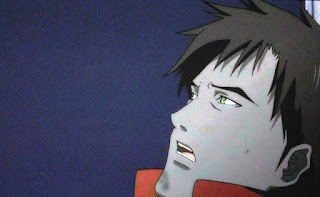 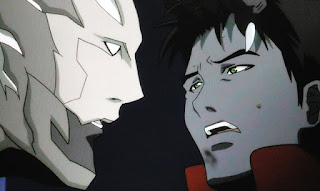 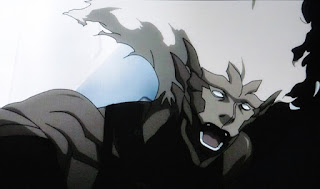 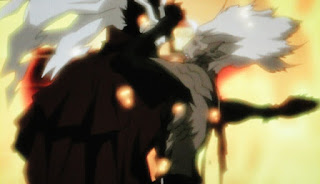 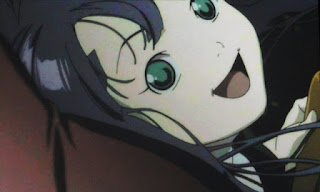