"Haven't you heard? It's the end of the world. Where would you rather die? Here, or in a Jaeger?"

As predicted and expected by most, I'm simply pleased to memorialize the news here that director Guillermo del Toro's Pacific Rim (2013) reached the 400 million mark at the end of August.  My unbridled and irrational coverage of all things Pacific Rim sees my unleashed mania rewarded as the film reaches 405 million as of this writing. 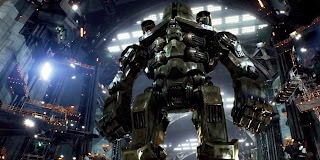 While, for whatever reason, Pacific Rim was not as big as expected in Japan.  It was undeniably disappointing to see the returns from the United States box office and more than a little surprising to witness the lackluster response in Japan given its kaiju roots, which no doubt worked against it on some level. 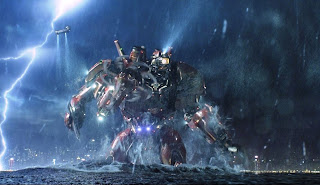 I do believe a sequel could very well change all that particularly as the Blu-Ray proliferates through Christmas and people begin to warm to it in much the same way people rediscovered Batman Begins (2005) by Christopher Nolan which essentially set up the monster success of the next two films.  Batman Begins was revived by the DVD market and a re-evaluation of that film established a massive return on the next two pictures.  Also, Firefly, despite cancellation, has proven to be a massive success on home media.

It is entirely conceivable that Pacific Rim should bounce back impressively with the sequel release and be an even more stunning, Jaeger-sized return. 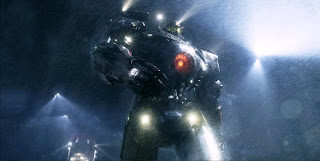 If Hellboy 2: The Golden Army (2008) could top Hellboy (2004) there is no reason the world-building beauty and artistic grace of a genre-flexing undertaking like Pacific Rim can't generate even more power a la the commanding style of a Gipsy Danger-sized elbow rocket punch.  I can see it. Can you?

I think a lot of people are excited about a sequel possibility. It's not a foregone conclusion.  I'm still waiting on that follow-up to District 9 (2009), but I do believe Pacific Rim 2 has a lot of interested parties, a lot of potential and an upside that is much bigger.

If only people could appreciate the cinematic splendor and dynamic color palette del Toro employed over the positively bland approach taken on something like Michael Bay's Transformers (2007) or even Joss Whedon's The Avengers (2012). Pacific Rim is a much more pleasing effort in the vision department with del Toro at the helm.  I'm a big fan of writer Joss Whedon, but del Toro knows how to visualize robots and kaiju.

Word out of Hollywood is that The Sci-Fi Fanatic was lined up to pilot a new Jaeger for the sequel called Electric Squall. "Get ready! This is for real!"
Posted by SFF at 12:09 PM

Awesome news, there was no doubt in my mind it would succeed, how could people NOT recognize the awesomeness of this movie, the coolness?? I hope the sequel materializes...and that the rest of the american public catches on.

I too look forward to a follow up to Distric 9, that film is ripe for a sequel! The alien did say he'd be back in three years time....

I suspect the Japanese were still a bit leery and dismissive with us yanks over the 1998 Godzilla debacle. Maybe they saw the trailers and just thought, "Oh, great. Another wannabe attempt to do what we’ve been doing for the past 60 years," or "Yeah, we’ve got too much of that subgenre over here already," ...or "Those assholes dropped A-bombs on us. Fuck them!"

The Wolverine opens in Japan this Friday, and I’m interested to see how it will do.

Electric Squall? I dig it. If I could name my own Jaeger, well, let’s see:

This is the kinda stuff I think about at work.

Your love of this film knows no bounds! That's cool, I enjoy your enthusiasm.

And yet another slam on "The Avengers". Jeez, guess the film just rubbed you the wrong way. I think you may have been overhyped for it. That's a killer for any film.

I thought it was solidly entertaining, hardly Whedon's best work, but a good fun time all the way around. Besides it gave us Robin Sparkle dressed in black leather and welding a gun. How can that be a bad thing?

Looking forward to seeing "Pacific Rim" just hope you don't overhype me for it. ;)

Haha get back to y'all... Too busy cracking up from the Cannon and Roman's hysterical comments. See u tomorrow. Yay indeed l3! Here here Franco!

Ok Cannon. I loved your comment. I always love your counter commentaries at JKM's literate site as well. They are always very well-articulated, fantastic reads.

I would agree, The Wolverine will be interesting because of its Japan-centric storyline. Hmmmm. Either they will be like, "Let's see how our countrymen are portrayed by this Yank." Or, ... well, the third option you mentioned.

Loved your Jaeger names too brother and I know what you mean. I have similar thoughts on a daily basis. :)

Cheers Roman. You were cracking me up. I totally keep firing shots across the bow at the overrated The Avengers.

After seeing that thing, I just can't let it go. How come there is no one out there decrying what a boring film that was. Honestly, if that is the future of superhero films, count me out.

I thought The Wolverine looked far more interesting all along than something like The Avengers.

Anyway, you really made me laugh because I did think that The Avengers was a giant lumbering bore.

Couple of last things. Totally agree about Robin Sparkle. Just incredibly sexy. She, for me, was one of the best things about that picture and she was not in it nearly enough to save it.

I'll go on record to say Pacific Rim may not be the stellar picture some would hope for, but it was entirely my cup of tea. So, yes, I had a whole heck of a lot of fun with it for all the reasons I've said.

It's a rollicking good kaiju jaeger picture, but since I have overhyped it here (and I have), you're doomed.

Seriously, I do hope you see it and have a similar reaction to all the fun. Unlike The Avengers, at least I felt alive while I was watching.

I had to check my pulse during Avengers.

Cheers all. Here's looking to PRII.

As far as I can see from the reviews and comments elsewhere, the fans of Transformers, Avengers and the like find the Pacific Rim just awesome.I'm not into that kind of stuff at all, but I loved Pacific Rim for its emotional touch and for actually having something else besides lots of special effects and the typical it's-the-end-of-the-world story. People who have just one lifetime favorite film or genre are not uncommon, but I'm not one of those, and I'm glad that the Pacific Rim helped me to understand it.

I must tell you I completely agree with your point.

There was indeed an emptional subtext to Pacific Rim that is simply absent from The Avengers and Transformers.

You may have nailed precisely why I dislike those films.

Unlike others, I really did not like The Avengers. I've made it clear at this site. It's a loud boring thud of a film with absolutely no emotional resonance - not like Whedon's Firefly that's for sure.

Thank you for writing.
sff